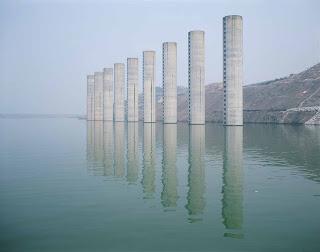 It is appropriate that Catherine Yass’ new film and exhibition at the Alison Jacques gallery should coincide with the London release of Jia Zhangke’s new film Still Life. For all their differences both are responses to the Three Gorges Dam project in China’s Yangtze River. Both are informed by its material presence and its totemic power; its connection both to China’s history and its future. Both combine a focus on the reality of the Three Gorges Dam with a palpable sense of its mystery and unknowability; symbolisations of change and progress with a sense of stillness, myopia and ending reaching towards apocalypse.

These thematic connections are realised in each filmmaker's work by radically different aesthetic strategies, related to their very different locations as artists. Zhangke returns again and again to shots of the Yangtze river valley where new skyscraper cities rise above a crumbling, already or soon to be demolished underworld, where humans struggle to survive, the films central characters searching for husbands and wives. Lock focuses entirely on the deep sea canal through the dam, never revealing the valley beyond, showing people only as tiny shapes moving around the holds on empty barges, emerging from the lock into a blurry, mist covered riverscape. Such emphasis on form and style also depicts the dam like a classic piece of modernist architecture, highlighting both the dam's multiple cultural legacies and Yass’ own position: seeking to engage with the phenomena of modern China whilst remaining within her own cultural familiarities.

Lock comprises two wall to ceiling projections facing each other across the darkened gallery. A bench is placed for viewers to watch the film from the side, looking from screen to screen for the 9’44” duration. Both films depict a ship's passage through the canal, although once this is established the emphasis is more on the sense and atmosphere of the canal than on maintaining a causal narrative chain. Shots are long, static, and fade to black. When there is movement – water rising in the lock, for example – it can be almost imperceptible or happening in a void, as when boats move out into mist, allowing no sense of direction or progress. Huge lock gates open on one screen and close on another: the film and us caught in a claustrophobic loop where leaving the dam is only another reinscription of its pervasive power. On the right screen the prow of a ship is always at the bottom of the picture, rooting the camera in the movement of a boat. There is no such anchoring on the left screen, movement being derived from the camera/ film maker's eye, suggesting the film is witness to psychological and theoretical as well as physical unfoldings.

Whilst images and movements are slow, sound is constant, appearing to be a mixture of signals, dam operational announcements, and low drones and hums, which may be amplifications of the lock itself but acquire a haunting electroacoustic quality. It draws attention to the lock – and the gallery space within which the sound moves – as literal and metaphorical resonating chambers in which meanings are both amplified and confused. It is sound which is fluid and moving, and to which we must turn in our attempts at sense making, in contrast to the huge static, concrete forms of the damn. It is through this quality of resonating that Yass begins to find political and social meaning emerging out of her strict limitations of location and subject.

It would be a commonplace, like the galleries own notes, to say that the human figures seen moving about the barges provide a sense of scale. Instead, what Lock reveals about the dam is how it has superseded notions of scale and relationship. The film shows nothing beyond the dam through which we can determine its scale. The environment itself has lost its bearings, and the only way of indicating enormity of scale is for the artist themselves to make the projection fill the whole wall in the gallery. Human presence is almost inconceivable in the film, a sense emphasised rather than contradicted by the small, moving squares of orange safety jackets or the human voices fused with machines on the soundtrack.

The sheer size of the projection creates grainy, indistinct images which are a formal equivalent to the enveloping mist. An alternative strategy is attempted in the shows other component: four photos presented in light boxes. In one we do see the wider valley: its sides stripped bare and the location for a series of huge banners proclaiming For the good of the people. In another the landscape is only viewable through the gaps between more government placards, as if attempts to depict landscape and the landscape themselves are being reduced to prescriptive one-dimensional announcements and propagandistic gestures. Like the wall-sized projections, the light boxes are the artist’s own attempt to provide mass and volume to an essentially unknowable experience, but one doomed to paradox through the uniformity and artificiality of its even light.

As Yass and Zhangke both chronicle, the Three Gorges Dam is a totemic symbol of China’s development; a site where numerous arguments and controversies are literally and symbolically acted out. It is a bold and rewarding strategy to act that out, as Yass does, solely within the forms of the lock canal itself, and it is in viewing her film alongside Still Life that we realise how successful and specific Yass has been.