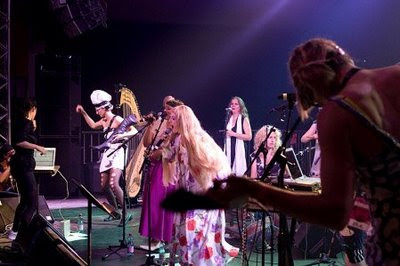 Describe this Girl Monster, then.

Spotted at the Donau Festival in Krems, a small city in Austria not far from Vienna.  25 April, 2009.

The Donau Festival presents music, performance and video, skewing towards the avant-garde aisle of available contemporary pop/art.  Operating since 2005 under the direction of Tomas Zierhofer-Kin, the big headliners in April this year were bands like Sonic Youth, Antony and the Johnsons, and Spiritualized.  Also on offer was interventionist fare – among others, Reverend Billy and the Church of Stop-Shopping, and an ongoing installation by Slum-TV, an organization of videographers from Kenya.  'Fake Reality' was the theme: 'a seven-day attempt to respond to the unreality of reality of our times by means of various artistic media and positions.'

On the fourth day, the Girl Monster appeared.

It started in 2006, when an audio-fanzine also called Girl Monster came out, 'bringing together contributions by 62 female and cross-gender artists from the fields of music, theory and art between the years of 1978 and 2006: the initial spark for a Girl Monster philosophy, aiming to encourage female artists to gain new freedom, be unique and wild, thus creating a platform for the further development of a culture.'

Is it a friendly Girl Monster?

Girl Monster has lots of friends, anyway. DIY is an understandable but insufficient description of the underlying principles operating here.  The bands eschew big labels (Chicks on Speed have their own label) and a purposefully amateurish aesthetic links all of the artists, but collectivity and group effort reign supreme – nobody is doing it by herself.  LTTR and Ridykeulous are other collectives with members represented in this bunch, and behind it all there are loads and loads of producers, beat-makers, designers, programmers, not to mention fans who document and promote and keep the whole thing going.

Friendly, though, is also an insufficient term.  The Girl Monster has teeth, and it isn't always nice.

Anat Ben David in a dress fringed with lovely, synthetic, blonde wig-hair, and then later she had on terry-cloth towels and black electrical tape.  robbinschilds rolling around in piles of monochrome t-shirts and skirts, dressing and undressing.   JD Samson (also from Le Tigre) in splashy print shorts and, for part of the M.E.N. set, a headdress shaped like a suburban house with sloped roof.  Jwl B and Shunda K from Yo! Majesty leapt out of their shirts altogether at the end.

Fashion is an element in the production constellation, floating alongside music, text, reproduced images.   Taken largely from outside the mass-consumer field, clothes are as important as the mechanical and digital elements.

Where are the Girl Monster's parents?

Both self-generating and a grateful child, the Girl Monster comes from nowhere and finds itself everywhere.  The idea is to make history, in two senses of the phrase.  On the one hand, the artists are marking a break, attempting a new way to be queer and hot and not give a fuck.  And on the other hand, they're asserting a genealogy.  The Girl Monster Orchestra combined groups who'd played less than a dozen times together with the Raincoats – one of the most significant post-punk bands and a major reference for anyone interested in music and women.  The Orchestra was interrupted by a performance lecture by A.L. Steiner on feminist art history.  With the urgency of a team coach, Steiner insisted: 'Come on! You have to know this stuff!' Feminists know well that looking back is looking forward – radical reproduction means populating the past. 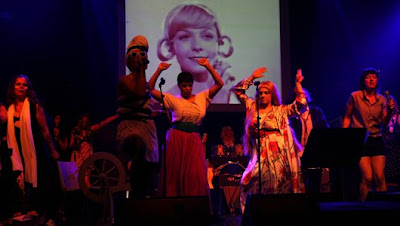 What does the Girl Monster eat?

Is it a fictional Girl Monster?

Well, it has a volatile relationship with the actual.  In other, less pretentious words: Chicks on Speed was very loudly a 'fake band' until they put out an album.  This network of artists has forged careers in a progression from joke to game to lifestyle to institution.   Though actually, it's less linear than that.  Professionalism is an object of ambiguity for all of the acts under the Girl Monster umbrella.   An extreme savvy about the subtleties of pop, sex, image and the commercial market rides alongside a projected disregard for standardization, restrictive codes and normative lifestyles.

Is the Girl Monster a girl?

Is it a political Girl Monster?

Is the revolution a party?  (Possibly*)

* Girl Monster totally rocked in terms of super-exciting reconfigurations of identity.  Queer, female, genderqueer, ethnically and racially progressive.  And in terms of opposition, the message is anti-war, anti-globalization, anti-authoritarian.

The problems that come along with a self-organizing, totally flexible, anti-professional ethic are under-recognized, though.  Neo-liberalism loves this model of production – low cost, labour-efficient, market-responsive and appealing to a culturally privileged demographic.  A much longer essay could be devoted to the difficult intersections between the DIY ethic, the DIY aesthetic and the DIY industry.

But! It's maybe even more significant to question how contemporary corporate capitalism has appropriated certain deeply pleasurable activities that were long associated with the Left – creative processes, collaboration, self-direction. It's a task for progressive, even oppositional, politics to figure out how to get these activities back – how to make the movement feel good.