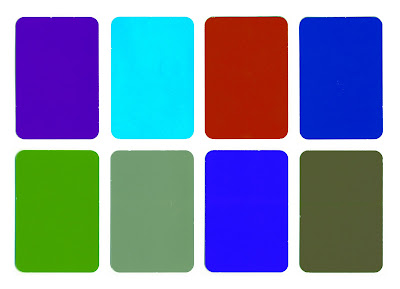 Look at the Chisenhale website and the only image of Ulla Von Brandenburg's new show, is a paint-sample like grid of coloured squares. It doesn't actually feature in the show, but how it appears instead says something about what is going on in this thoughtful installation.

Walk into the space and the grid is present as a maze of coloured screens, hanging down in a manner quite loose and shower curtain like. It's possible to walk through most of the walls, although there are also clear paths that reveal an interlocked grid of small "rooms." In a couple there are a benches, and in one a projector showing a continuous 16mm film on a screen of purple cloth.

Given the noise and the attraction - and given how the screens aren't really immersive - it's tempting to head straight for the image, seeing it first from behind and then heading into its little cloth walled room. But the space is a lot of this piece: a structure definite but fluid, open but closed, finished but forever temporary, definite but vague.

Read the press release and there is a connection to psychological theories linking colour and personality. It's curious how these manifest, because it seems posited on a certain immersion whilst the installation remains functionally constructivist and more an idea than an environment. As rooms, too, each small chambre is uncertain of its function, its level of comfort, the demands it makes or the opportunities offered to those within it...

You woke me to show me the colours. Is this some kind of Josef Albers homage? Is the arrangement of colours systematic or intuitive? I sensed and responded, experiencing the later, sensing the former. It was before sunrise. A bench that doesn't look like it is for sitting on. I sit on it. Real enough, but still like a mock-up, an indication of possible experiences, a memory map, a trail of hidden symptoms, ideas and spaces tested with casualness, echoes in wood of what... 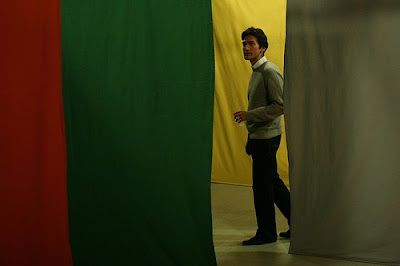 The film, too, seems be testing or exploring something, comprising a long continuous and looping take around a stately home. Serenely steadicaming down corridors, forever interrupting its flow to encounter posed individuals or groups. A woman looks in a mirror seeing, Magritte like, the back of her head. A tableau of a man dying in bed evokes a certain art history, but a small audience, dressed casually sit on fold down chairs like this is an impromptu art class. But they have no art materials...

Or two women stand static, holding a large plan flat against the wall. A man with his hands bound in some sort of cats cradle. Phone me. A man checking the corner of his eye in a mirror. Von Brandenberg writes how these are combinations of scenes from art history and personal memories.

What motivates this camera? On the one hand it is a space explorer. Practically and poetically, the human subjects are often in light: looking out of windows, in pools of daylight. Or there are mirrors opening up the space, or keeping the present in the past. Sometimes the camera seems to be searching for human presences within the Marienbad-like building, holding to a scene or figure. Other times it goes up close to the figure only to brush past, continuing inexorably on its way, as if its (non-) interests are elsewhere. 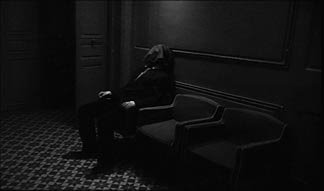 But Von Brandenberg's subjects are also frozen and artificial, somehow hesitant in the flow of life, whilst the coloured screens move and shift at the slightest breath or passing movement, not particularly gracefully but with a certain authenticity.

Let's seek an equilibrium between these two aesthetics, film and cloth, black and white and colour. A Building Echoes workshop. Look for moments of transportation: two walking sticks in the film are propped up in the corner of the Chisenhale gallery. A screen reappears over the hot face of a sleeping figure and someone - I missed it the first time - totally wrapped in a sheet.

I must say more to you about the act of projecting on the cloth-screen itself, where all the black and white certainty of the stately home becomes dependent on the fragility of the cloth screen itself. Similarly, the cloth hangings, for all their tentative fragility, emerge through such an act as a kind of ground, a support, upon which worlds - well, films - can be constructed.

I also thought a lot today about teeth. Goodnight. 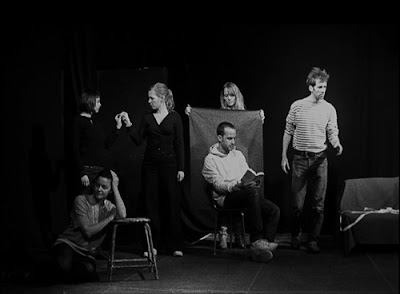 In the Chisenhale Gallery foyer Von Brandenberg has painted the walls black, with a pattern of white splashes. It appears like woodland, as too it evokes a certain history of formalism, as too it evokes the light in the stately home, or marks scratched into film emulsion. It, too, like the screens, combines its careful specificity with a certain casualness: it tends to be almost missed in the dark of entering the Chisenhale space anyway, literalising and transforming the experience of entry into any exhibition here.

... different spaces... leaking into the others... colour become screen become film become cloth become forest...an effort... not to understand, but to equalise and keep diverse... I am moving out and moving in.. the same gesture... not going to feel completely comfortable... because uncontainable... this unstable lexicon of... you...