PETER COFFIN IS FILMING THE GARDEN 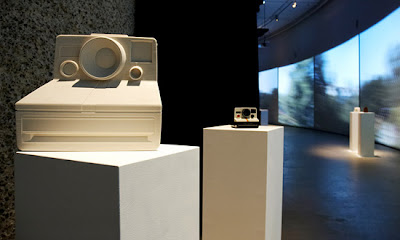 If the other Sunday was about filming philosophy, then Peter Coffin's installation - at the Barbican Curve gallery - was about filming gardens. At first glance, there was much similarity between these two film-making roles, a productive interconnection between a stuttering, seminar leading Deleuze and a roaming, hand held shot of a bonsai tree.

If you haven't seen it, then the Barbican's Curve gallery is what it says it is: an arcing space encouraging installations flowing somehow from one end to the other, attentive to the drift and to the spaces slow unfolding as you walk along its maybe fifty metres length. It's curious that, remembering previous shows, the Curve seems to stretch and shrink from show to show. Coffin's gardens make the space long. You feel it must be nearing the end, then discover another ten large video screens around the bend.

Because if one wall of the curve is a floor to ceiling black curtain, the other side is sixteen separate video projections with but a small crack between them, ten or so foot high. These document a journey around a Japanese garden - the movement flowing and hand held, varying height and position. It's a portrait of the garden, from individual plants to the buildings surrounding the garden walls. But it's not a linear body-journey. Its impetus comes as much from the regular fades between perspectives, giving each screens unfolding a certain angular, cubist rhythm. 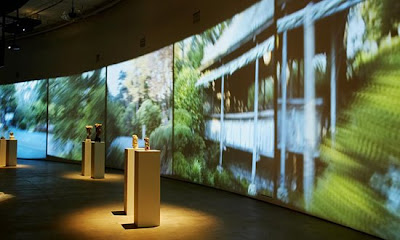 An over-easy, slightly innacurate analogy, certainly, but the scale of Coffin's work suggests a Bill Viola re-make of Marie Menken's Glimpses of the Garden. Coffin's focus on gardens, however, may be connected to certain kinds of spirituality, but it's very different to Viola's. Not just through its pace, but also with its roughness, its blurred qualities, its deliberate disjunctions and lack of any central iconic image. It lacks, too, any serene, metaphysical unfolding for a structure.

All of which are some of the thoughts that came, slowly wandering the curve from screen to screen. I had to make a complete passage along, and was heading back, before I realised there was a continual flow of a single image across all sixteen screens. I still wasn't totally sure of this. The movement, and the fades, made it deliberately uncertain, as did the shifting light across the images, that maybe came from filming at different times of day, trying to approximate shifting weather conditions in a cameras lurching, slightly vertigo inducing swoop. 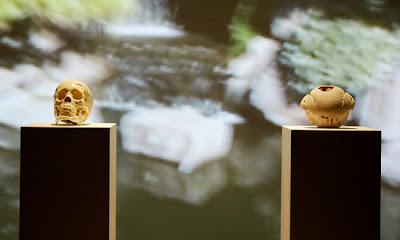 All of which ignores a further important element. Dotted through the space are pairs of plinths on which are placed a variety of objects: a shoe, a skull, a pencil in a compass, a piece of bark, a starfish. As this list demonstrates, they are objects with a number of different registers: everyday objects, emblems, symbols, commodities, art objects, with a certain taxonomical moving between them. The objects are paired with plaster cast versions of themselves, which similarly offering a variety of translations, from a literal recreation of the object to a stylised transformation.

Initially, I found these obtrusive, although a friend of mine noted that he focussed on the objects rather than the projected images, anchoring himself amid the peripheral flow of garden-images. Viewed in the gloom from the exit they look like a rather boring display of bronze sculpture and it takes a while for their quirky individuality to emerge, their somewhat joking interplay of art object and commodity. 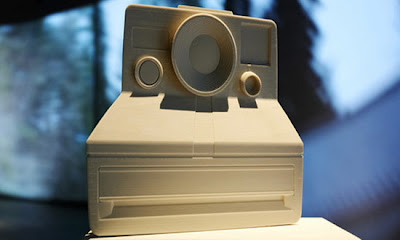 How do the objects relate to the garden, and also to a broader epistemological intention of filming gardens?  They have a definite rough, lab-like quality, as if Coffin is making a tool kit for how the philosophy of Zen gardens emerges in his own life, working with the impossibility of that task. Or read the other way: the gardens are both object and plaster cast, a set of translations and transformations of everyday experiences and impulses.

All of which added up to a thought-provoking experience, suggesting the filmed garden - a mediation of a mediation, a layering into technology - could still be a productive site for thinking about, through and with contemporary issues. Garden Pieces, a season of garden- related experimental films - curated by Peter Todd at BFI Southbank in April - will offer a further chance to explore all these ideas.