DWIGHT RIPLEY'S GOING TO THE BALL: A PLAYLET ON MENKEN AND MAAS 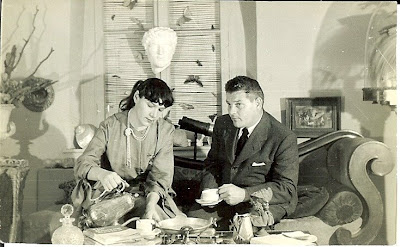 Any prolonged engagement with Marie Menken's films and paintings prompts a need to come to some understanding of her marriage to Willard Maas. Figuring the complexity and privacy of any relationship into a critical - or even anecdotal - discussion is always difficult.  The starting point for Whitney Chadwick and Isabelle de Courtivron's 1993 study Significant Others: Creativity and Intimate Partnership outlines some of the key issues:

... we asked the following question of the thirteen contributors to this book: if the dominant belief about art and literature is that they are produced by solitary individuals, but the dominant social structures are concerned with familial, matrimonial, and heterosexual arrangements, how do two creative people escape or not the constraints of the framework and construct an alternative story? (7)

Tate Modern's Marie Menken symposium (15-16 Nov 2008) itself struggled with the balance between the abundant supply of gossip and anecdotes about Menken-Maas and how to think through - or even identify in a helpful manner - how their relationship related to their film-making.

Or, rather, it was also an attempt to articulate how the different, incomplete aspects of what we do know relate to each tother: Maas homosexuality; his relationship with Dwight Ripley; Ripley's role as patron of Menken's films; Menkens ongoing relationships to Ripley's (former-) boyfriends; and the role of the Menken-Maas house as a social nexus, a kind of proto-Factory in Brooklyn.

The Tate Modern discussions focussed around Carolee Schneeman's observation that it was offensive to find Menken "servicing the daisy chain" by serving drinks and cookies to Maas' boyfriends. My research since has involved several discussions that find Schneemann's remarks themselves offensive and insulting, simplifying a complex relationship into an argument that supports a personal agenda.

How to develop a new framework for thinking about this, though, is difficult. Maybe we have to accept a sense of fiction within a relationship . To this end I'm delighted to publish, courtesy of Douglas Crase and Frank Polach, a playlet by Dwight Ripley which offers a dialogue between "Marie" and "Willard."

Written c1951-52, Ripley sent the playlet to Menken and Maas, and it was maintained by them amongst their papers. As Crase suggests, it's fascinating whether such a playlet was known by Edward Albee, whose Who's Afraid Of Virginia Woolf, is often seen to be informed by the Menken-Maas marriage. Considering Menken's performances in Warhol's The Life of Juanita Castro and Chelsea Girls, the prospect of her acting out the following script is a rather mind-boggling one. 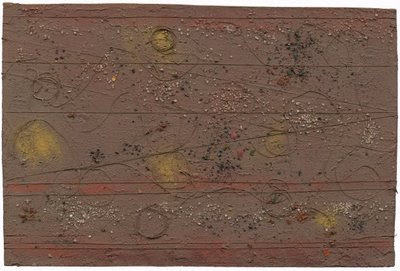 Some other connections: I also found it constructive to consider the script as a written equivalent to the performance style of Jack Smith and Mario Montez, highlighting, as Crase has discussed, the role of a certain sense of Englishness within the Menken-Maas milleu.

Alongside Albee, a further useful connection would be to the intense and hilarious improvised domestic strife of Brigid Berlin and Charles Rydell in Warhol's Fight (1975), one of a number of pilot TV-melodrama's on show recently at the Haward Gallery in Other Voices, Other Rooms.

Marie (stepping on to the terrace): How is my wig?

Willard (coolly): Your wig is not on fire,

Nor is it drenched in sauce. It is a wig,

A snowbound cirrhus perched on a base of wire:

A mild peruke, unfitted to inspire

Willard: But I do, my dove.

It is most suitable, a sweet peruke

That makes you less a duchess than a duke.

Marie: And so it does! Well, how d'you like my dress?

It is an oldie dyed for this one rout.

Were my companions. All you boys were out.

Willard: A Long Day's Dyeing! It becomes you well.

Willard: You are, my dove, a vision. But for sloth,

Willie's companion, I would cut as gay

Marie: First let me feed the birds, and pour us both

A slug-slug.  Your beret?  Quite a surprise.

The red brings out the color of your eyes.

Willard: I was a-boozing till that milksop Dawn

All rolled in one!

Is what I'd say. But never mind. Take this

And swallow quick lest we Scavullo miss.

Will have released your trills ere we return

With throbbing megrim, once again to learn

Marie: And you, dear Jug-jug, sing until you burst

While we regret our uncontrollèd thirst!

(to Willard) Another swig?

Marie: Oh, it will be

Fantastic! That I'm sure of.

Marie (under her breath): Especially so when I am overweight.

Willard: You're not!  You look divine, a mixture new

Of snow and blood and sapphire luminescence,

A mad mélange of scarlet moons and crescents

Sewn on a sea of Mediterranean blue!

Marie (gratefully): Of all the wives i' the world, a poet's wife

Must count herself most singularly blest,

To hear the squalor of quotidian life

In stanzas rich from dawn to dusk expressed!

But aren't you too

Scanning your sentences the way I do?

The sea to catch a glimpse of that S. S.

Willard: He's not my type at all, but Dwight –

He'd go insane for that one, though I think

The fact the Captain doesn't smoke or drink

Willard: Quite.  An obstacle, let's say,

Marie: It did? Oh dear. I'll scan the sea no more.

Willard: I wish we could persuade Rupert and Dwight

To come to Pavlik's party!  Such a bore,

This sour distrust of revelry!

Sometimes I wonder if their attitude

Isn't more rough on them than merely rude

To others.  Paradox (excuse the mot)

Is but a cage wherein the owner sits,

Fed by a Crocus of enormous girth.

To him the bird is caged, he's at the Ritz,

And every fag should be erased at birth.

Willard: Well, some at any rate... Yet darling Joe-joy,

You must admit, is utter bliss and blow-joy:

Marie: I know. Of course he is. But then

Think of the dreadful would-be gentlemen

Willard: Or the self-important kids

Who hop around the Village, kangaroos

But isn't that Scavullo at the door?

The playlet ends and we, my dears, begin!

NOTES: Adele is Menken's sister, frequently described as her sidekick. Scavullo is Francesco Scavullo the fashion photographer. Crocus and Jug-jug are most likely caged birds. Captain Manning was the name of the skipper of the S.S. United States in 1951-52. Dwight is Dwight Ripley. Pavlik is painter Pavel Tchelitchev. Joe-joy is Joe LeSueur. Colby is Colby Walworth, director of an annual antiques show held at the Park Avenue Armory.