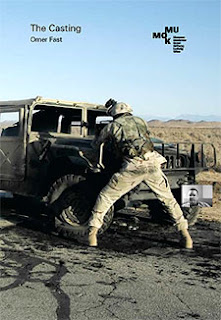 
Omer Fast’s installation The Casting was on show at MUMOK, Vienna, from October 2007 through January 2008. I didn’t see it, but it’s a work given extended life by the show’s excellent catalogue, conceived and designed by Fast and Manuel Raeder.

In its installation form, The Casting comprises screens which, on one side, tell two stories: of a shooting on a road in Iraq and an American soldiers affair whilst stationed in Germany over Christmas. The two stories become entwined, but although the soundtrack offers a seamless continuity, a sense of coherence is ‘betrayed’ by the visuals which cannot be manipulated so deceptively. It also becomes apparent that everything is staged with actors in the American desert. On the back side of these screens the spectator can encounter roughly shot material which appears to the original interviews Fast conducted with American soldiers, but which at the end of the film is itself revealed to be auditions with actors for the part of the American soldier. This, at least, is how I have constructed the work for myself from written accounts.

Instead of documenting the work, Fast and Raeder translate the key components of the installation into book form. Seeking a bookish equivalent for the installation’s double screens, the front cover shows a solder shielding himself behind a patrol vehicle. The image continues off the edge of the page and, turning the book over, one finds the soldier to be part of the complex set up of a film crew. The front cover also reveals a thumb-nail black and white photograph of one of the interviewed soldiers (or maybe auditioning actors). There is one of these photos at the same point of every page in the book, making a flip book comprised of different heads that nod and twitch as if responding to interviewers who, in this instance, are the readers own fingers. It’s an effective way of expressing in book form Fast’s interest in the complex dynamics of the interview.

The installation’s doubleness is expressed too in the book's basic design, utilising the often problematic – in design terms – need to reproduce essays in two languages. Here an English first third, gives way to a storyboard, followed by the German text – a recasting of the work’s themes on the level of language. As well as the thumbnail prints the essay and interview texts are interspersed with transcripts of the soldier interviews. As The Casting pieces together two different stories, so in its book incarnation there is a shifting between transcript, critical prose and authorial reflection. Unlike the film the two remain distinct – the transcripts clearly separated off and in smaller type – but it at least opens some of the critical writing to the same interrogation applied to the authority of the interview and the image in the installation itself. The book form leaves the reader free to decide how much they interweave the different texts and maintain separation and continuity in their style of reading.

Matthias Michalka’s essay outlines the key themes posed by The Casting, seeing them through a triad of subjectivity, representation and history of the gaze. This begins by exploring such themes as construction of effect of continuity and use of tableau vivant, but is more interested in going beyond debates over truth and fiction to an acknowledgement of the psychic reality of repression, desire and pleasure within which both are contained. In the e-mail exchange with Sven Lütticken, meanwhile, Fast suggests that his recent works – such as De Grote Boodschap – have seen a shift in his work from a pull back towards an original speaker to situations where multiple speaking parts unfold over time. Although his work is often seen as concerned with systems and forms of representation, Fast concludes the exchange by seeing his work more in terms of repeated explorations of the sensuous body:


To paraphrase, I think this sensuousness has a lot to do with the body’s potential to defy the clock and other systems of super-imposed (self-imposed) order. Sure enough, the body appears as a recording, storage, and playback device for experience. Like any device though, it is bound to malfunction, to rebel, to freeze, to break down, and send mixed messages. In as much as there’s subversion in this, it is in pitting the body against order, against time, against any system we make up, with force and with pleasure… (41)


The 75-page “A Storyboard Made After the Fact” bridges languages and functions as hinge between the double cover of front and back screen. The title reflects some of the ambiguity of The Casting: is the installation itself the fact that this storyboard follows, or is the fact some original event or story told to Fast by American soldiers. Is “made after” a simple statement of chronology, or is it to be read as indicating a work “in the style or manner of.” What is achieved is less a catalogue of an installation, than a re-telling and exploring of the work’s stories, processes and structures through still image, text, and an acute awareness of the effects in time and space of a sequence of pages and the process of reading them. Although more modest in scale, the awareness of these issues and the solutions found reminded me of Hannah Collins’ Finding, Transmitting, Receiving.

Not having seen the installation, it is impossible to say what specifically the storyboard – and re-conceptualising the project as bookwork – emphasises or edits. The film of The Casting explores the tableau vivant in tension with the subjects' tendencies to shift and twitch within the films durational pull. In book form the consequences of this freezing can be explored in a more refined way, highlighting the power of disparate elements to be perceived to cohere by virtue of sequencing alone. It also focuses on the gaze between participants, with relationships becoming solely expressed as frozen gestures of sitting, watching and asking. Throughout the storyboard there is a constant shift from images where artist and actor gaze at each other to those where they look directly at the camera and at the implicated reader. It is a tribute to Fast and Raeder that this implicating is evidenced in many ways by this excellent publication.