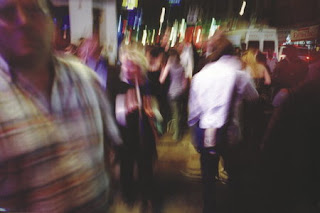 Recently in London I’ve seen exhibitions of artists’ films focussed on China, South America and Singapore. So it was perversely somewhat startling to enter Gerry Fox’s installation at 176 and realise that everything was familiar. Not just was it familiar as London, but Fox seemed to have deliberately chosen the most familiar bits of London, with different films and screens looping around Piccadilly and Leicester Square, the South Bank and Chinatown, Old Compton Street and the Tate Bridge, the Lloyds’ Building and St.Paul’s. What Fox wanted to chronicle and reveal about London, this immediately suggested, was not to be found by the uniqueness of his discoveries, but by taking himself and his camera through an iconic landscape of business, pleasure, culture, and religion.

This is an apt but heavy handed way of describing a filmic practice that seeks to move easily within the city. Night in London/ Nunhead Cemetary began around the busy late night streets around Leicester Square and Picadily. The camera is a real presence: moving through the streets at a walking pace it prompts couples to part, allowing the camera to pass. It forms momentary attachments to individuals soon left behind as part of a commitment to the cities - and its own - movements and flow. This is accompanied by a loud, tumultuous soundtrack which – in its volume if not its details – repeats to indicate one end of a spectrum of urban experience throughout the show.

These walks are presented on six screens: one screen on each wall and two further screens on floor and ceiling, which constitute the space around camera and pedestrian. I was never sure if there weren’t moments when there was some lag between screens, but this was the point about such a set-up: the bodies actual phenomenological experience is curiously impossible to perceive as a totality. To even approximate it we are always missing and catching up. Six screens reinforce the sense of speed and tumult, but also allow for the opening of alternatives. A lot of the time, looking upwards at the ceiling screen is to experience a space where, with a minimal of visual detail, the rhythm seems slower than elsewhere.

The film gradually moves into quieter places: the streets around Picadilly, St.Paul's, a deserted late night Tate Bridge and South Bank, with an accompanying emptiness of sound in which distinct footsteps resound. Now the headlights of a passing car are an event of note, not one element amongst many, with Fox extracting and separating elements out of the beginning’s bustle. I often thought shots were arranged, amidst an engulfing black, to allow white, blue or yellow light to predominate. Further evoking Whistler, the film is pulled towards the Thames and in a dramatic conclusion the camera is submerged in the river. From its earlier engagement, the film has unfolded as a withdrawal into interiority and eventual suicide - the hub-hub sound of the city replaced by an equally deafening gushing of water in the camera-suicide’s ears. The film depicts a removal from human relationship even on the level of spectacle.

Nunhead Cemetary provides a sequence of images of tombstones, tangled vegetation, and rich patterns of light and shadow created by strong sunlight. The camera was never fully identifiable with a pedestrians pace and rhythm, and is more separate now: moving through the graveyard more evenly than it would be possible to walk. Whereas the night scenes were always cut between, here there are regular overlapping fades between different shots of gravestones and vegetation, building cubist-like composites. The cemetery sets up a contrast Fox repeats elsewhere that is more between urban bustle and urban quiet than between urban and natural. The complex patterns of vegetation and the focus on light have much in common compositionally with the complex patterns of Leicester Square or Picadilly. The film ends with the whole room and its screens all lit in a tabula rasa of white light, expunging the cities memory in preparation for new explorations.

This was the most visually complex arrangement in Living London, but the other installations did show how a film making of phenomenological openness could approach particular issues, through a sort of Eisenstein montage on the level of film and screen not shot. The second room featured two screens arranged at right angles to one another, although the films alternated between the screens rather than overlapping. In the first a baby crawls on the grass of Westminster, juxtaposed with but oblivious to the banners and tents of war protestors. The film seemed a study of juxtaposition in the city: how physical proximity can be a state of separation, and the way all contact can become a random conjunction of persons and symbols.

Other sections documented the Notting Hill Carnival – the camera moving amongst its promenaders in another focus on the city through changing colour – and the birth of Fox’s own child, in which miraculous and mundane conjoined. A final highly aestheticised study of the Hyde Park seemed a sentimental anticipation of child- and fatherhood in which the diversity of the street was exchanged for a set of edited manipulations of trees and swans and Peter Pan in elongating, refracting and blurring white light.

Writing about Living London I find my notes and memory putting images from the show together, no longer sure what image was in what film or installation. In a third room, two screens of archival footage of the 1910-11 Sidney Street riots is juxtaposed with a central screen where the camera moves along the same same streets today– contrasting narrow 1910 terraces with 70’s low rise; police shooting at rioters with a slow movement along the outside of a Costcutter; the black and white newsreel footage with Fox's own investigations. Like many aspects of Living London there is a flirtation with the heavy handed and obvious, alongside a sense that a city is a very obvious place, full of crude juxtapositions that film can only hint at. I think what prevents this from seeming facile is the openness of Fox’s frame – the way he often doesn’t impose composition but allows the elements of the street to flow in and out, confident that this element of flow will give the visual interest.

Elsewhere, the far right of three screens shows a tractor moving around huge piles of rubbish at a landfill site, its tumultuous sound filling the space. Two other screens show scenes of Ridley Road market: one screen providing a wide view of street traders, stalls, and shoppers; the other focussing on moments of economic exchange that have a quiet intimacy: bananas being placed in a thin blue plastic bag, a finger pointing at produce, a knife slicing the head off a fish. Another film combines a left screen of Climate Change protest, a right screen of an anti-war march, with a central screen of soldier's marching. It is a depiction of how, Fox suggests, spaces in the city are filled: by ordered, choreographed and coded movements. I watched for a while before realising the two screens of protests weren’t recording the same march, so attendent was I to the event as visual spectacle.

Throughout Living London, screens relate as steps in some ecological cycle, but one where the cities own streets and spaces fulfil the function of site of production. Iconic landscapes are far from fixed: receptacles or arenas filled with a spectrum of activity, people, colour, and noise. It is a vision of London that celebrates it, whilst also highlighting individual actions and psychologies in precarious balance with a larger, urban organism; the impossibility of holding on to an ideological position amongst the whirl. In another section, back in the busy streets around Picadilly, people are speeded up and superimposed, appearing and disappearing at the same moment.
Posted by MORE MILK YVETTE at 15:55