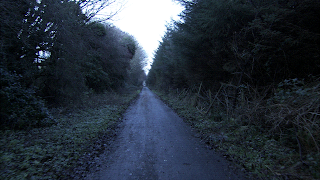 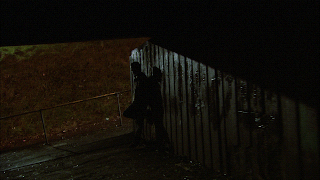 A camera moves down the centre of a country lane. Its movement is inexorable throughout the film. Other locations – a movement through trees or open ground – turn out to be to one side of the lane to which the camera soon returns. It moves through the dark and damp gloom of an underpass by a motorway, the back alleys of terraced houses – but even here, when we approach a corner, we find we have returned to the lane. The camera doesn’t just record the world, it seems to move in it as a collaborator in its creation – moving out into a car park, for instance, to make space for the car that soon moves dream-like into its frame.

Ghost Story was screened at the Prince Charles Cinema in Leicester Square as part of an Artprojx event on January 31st and is also the centrepiece of Willie Doherty’s Matt’s Gallery retrospective. Throughout Ghost Story the camera is accompanied by a grain and breath filled voice over by Stephen Rea suggesting conversation, stream of consciousness and the traditional stoyteller’s more formal register. It is this last mode from which the text itself formally derides – a richly illusive, poetical ghost story in which the atrocities perpetuated in a landscape come to suffuse and acquire the presence of wraiths within it. One of the challenges of Doherty’s film is how such strong material can be positioned and worked into a state of uncertainty: through as well as against its own conviction.

One way Doherty does this is by the formal and structural rigour of his film-making. In conversation with Tim Marlow at the Prince Charles cinema Doherty denied he was motivated by formalist concerns. However, it is interesting that the majority of his films highlight some formal process of film making that, taken out of context, might be found, for example, in Ernie Gehr or Michael Snow. In Passage (2006) the formal device is a re-working of the conventions of the shot-response shot. Over a two-minute loop, the film cuts back and forth rapidly between two men walking through waste ground at night, again accompanied by the sound of motorway traffic. At one moment in the film the two men pass each other, each turning to try and catch a glimpse of the other. The formal procedure of shot- response shot creates an inevitable encounter which, however, is ultimately unable to contain the men’s insistent motivations for their night walks.

In Ghost Story the consequences of the camera movement are twofold. It offers distancing from the landscape itself, preventing its static contemplation as scene or setting by highlighting its own reality. But it is also not really the movement of a camera that is foregrounded at all, rather a quality of movement and perception that relates to but is also disturbingly different from the way any human perception might relate to the lane, either through walking or driving. For all its insistence, the camera’s movement creates an openness about what is seen – positing it as an entwined realm of physical landscape, memory, consciousness, dream, and story; able to both fulfil and also step back from the particular demands of each.

This openness is one way of reading the pervasive presence of autobiography in Doherty’s work. Having read and heard interviews with the artist I can identify the lanes in Ghost Story as one of the networks of country lanes on the borders of Northern Ireland and the Republic; understand the text and the shots of back alleys as related to Doherty’s own childhood witnessing of Bloody Sunday. I also see the open car at dusk with its unidentified driver, the figure in the underpass, the film’s insistence and momentum, as depictions of the particular psychological state of the troubles in Northern Ireland. Nor is Doherty’s work ever separable from this situation. But devices such as moving cameras, 360º pans, and use of shot-response shot are ways of creating a distance from that experience; testing the degrees of its pervasiveness, affirming its presence whilst also wondering what kinds of presence are possible apart from it. This strategy is the artist filmmaker’s response to Bloody Sunday’s history of atrocity, denial, and, latterly, public enquiry.

Although the show at Matt’s Gallery was a retrospective the gallery made the decision to only show one film each week alongside Ghost Story, perhaps feeling that a loop of six or seven pieces in the second gallery would remove the intensity of focus and concentration these films demonstrate. In Non-Specific Threat (2004), the camera maintains a continual 360º pan around the enthralling presence of a shaven headed man. As in Ghost Story Doherty uses an actor – Kenneth Branagh – to provide a voice over. Again the text is read in a way that balances between public and private, responding to a scene and co-creating it. But although Branagh’s delivery unifies the elements of the text, the text is also more inconsistent than Rea’s wraith filled narrative, its content continually testing both its own attribution to any single point of view and its relationship to the figure in the image. Similarly, the camera’s 360º movement does not have the insistence and momentum of Ghost Story. In the shifting configurations of figure and often uncertain background, it is often difficult to perceive what and whether movement is taking place.

Longer and more complexly structured than films such as Passage and Non-Specific Threat, Ghost Story does feel like a summation of long standing concerns as they are expressed in numerous motifs throughout Doherty’s work: incessant movement or the rumble of motorway traffic, for example. Here such motifs combine to acquire a collective momentum, functioning coherently within the film’s microcosm. Whilst it is possible to see Ghost Story as a testing of a word against image, landscape against its inscription in a particular cause, the film is ultimately a testament to its own persuasive manipulativeness, pulling us and, one feels, the film maker himself, into the hegemony of its own concerns.

Only at two points in the film is the momentum of the camera interrupted. The eye of a young girl in close up is almost an ideogram for this compelling film as well, of course, as being a literal source of the seeing and being seen that leads us once again into insistent movement along a haunted and haunting country lane.