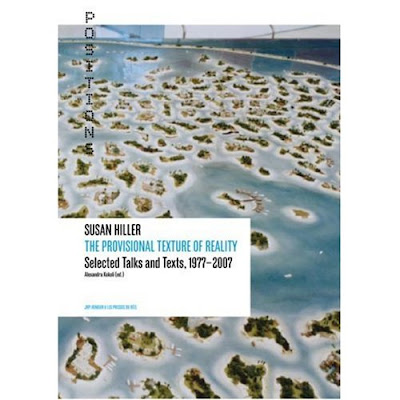 There is a delicate balance throughout the thirty years of talks, catalogue essays, introductions and interviews that comprise The Provisional Texture of Reality. If Hiller demonstrates a verbal facility in regard both to her own work  and broader structures and histories of art and thought, she is also acutely aware that if she could just talk or write about the issues involved then there wouldn't be any point making the art itself.

So the writings here give rein to that analytical verve, but always hold back, maintaining a space for the art work itself to function. Re-phrase that as the balance between logic, reason and coherence alongside something more mysterious and unfathomable, and an argument could be made for this being the key subject of Hiller's artistic output as a whole since the 1970's.

This critical-reserve concerns both her own art work and that of the artists about whom Hiller talks and writes. The first section of this book, then, is comprised of explorations-cum-tributes concerning Tarkovsky, O'Keefe, Helio Oiticica, Yves Klein, Henry Moore, Jackson Pollock and Kurt Schwitters. Hiller's tone varies. Her Pollock piece is the closest she comes to art history, seeking to unfold a web of underappreciated artists and influences she saw as leading up to Pollock. The piece on Tarkovsky moves quickest from its ostensible subject to a broader web of ideas and her own practice. But perhaps that is itself a tribute to the astonishing relevance Hiller finds in Solaris: its existence, like the other work she reflects upon, as a kind of viral cultural contagion.

Often - as was no doubt expected by those inviting her to speak at numerous themed conferences and symposia - Hiller is weaving out from each artist's work into a broader web of cultural connections as a way of connecting to her own work. There is a sense throughout Provisional Texture of attaining some clear ground where the self, the work, and the broader culture are all held in balance, and prioritising one is more choice-in-the-moment than imperative. The opening of "O'Keefe As I See Her" states a method applicable to many of the essays in this collection:

In a way, this is a collection of detours around the subject, circling in on it. It's like a drawing, where the negative space is as important as the marks, and where individual marks don't mean much on their own. In the process, I've found my lines of thought converging or overlapping to define a tentative shape that may represent a sighting or wish for something that will emerge more clearly in the future. (33)

Hiller's balance and reserve doesn't stop her making astute critical points. In the O'Keefe essay she raises many issues that have preoccupied academic art historians, but always founded on that initial statement of ambulatory method. Her critical response comes from her ongoing attempt to think (inter-) contextually. So here is O'Keefe in relation to her paintings, in relation to lots of other painters, to her depiction in Stieglitz photos, in relation to Hiller's own biography of engagement with O'Keefe, to Linda Nochlin's gender focussed criticism, and so on and so on. 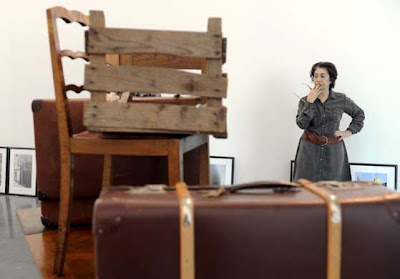 Susan Hiller reflects on how much easier it is to talk about an art work when it's not in the room with you...

Essays on Oiticica and Klein focus on the difficulties of preserving anything like an accurate and authentic picture of their work. What we can access of Oiticica's work is "only a collapsed sign of the larger work he made available...relics of a dead past." Klein, by contrast, "took death into account when he made it explicit in his practice of deliberately creating works that were already 'only traces" (55). Hence " his relics do not seem to convey more to those who knew the artist personally than to those who didn't." (55)

Such concerns with the object and related processes of collecting, categorising, curatorship and the museological, relate to Hiller's background as an anthropologist. This emerges here as a biographical detail, an obvious influence on her intellectual approach, and a source of irritation to an artist often finding herself victim of, as she would see it, a lazy critical willingness to identify her works as exhibiting anthropological tendencies. If Hiller wanted to work within anthropological frameworks, her own impatient, somewhat irritated position seems to be, then she wouldn't have abandoned her original career plans.

This is to a degree somewhat disingenuous because Hiller, at least early on in her career, cultivates and depends upon the connection to anthropology as both a source of income and  that through which the distinctiveness of her work can be articulated. Here Hiller reviews two exhibitions that, via content and context, weave a fraught amalgam of art and anthropology. In these essays - from 1979 and 1986 - Hiller is not accumulating a "collection of detours" that slowly circle in associatively on their subject. The ideas that lead to these exhibitions are colonial hangovers, and Hiller's aim is to highlight and skewer them with as much clarity as possible.

Thus her review of Sacred Circles: 2,000 Years of North American Art (Hayward Gallery, 7 Oct 1977- 16 Jan 1978) builds to where the show becomes - at least reading about it thirty years later - a kind of anti-credo for her work as a whole:

This exhibition, then, is really about using 'art' to cover up some historical truths; about using aesthetic judgements as a way of avoiding moral judgements; about expressing admiration for spiritual values while manifesting only materialistic ones; about admiring the 'work' while ignoring its meanings; about voiding symbols of their complexity by eliminating their context; and about valuing art objects more than societies.

To say that the purpose of the exhibition is 'that this art should at least be properly regarded for the sake of a better understanding among peoples', is, at the very least, an inadequate way to render justice to the peoples whose works are represented. (101)

Hiller's argument is all the more convincing for how - on the occasion of a review-essay for Studio International - she moves from condemnation towards demonstrating some practical alternatives. Several pages are given over to models of the kind of catalogue entry a non-colonial ethnography and curating would practice. Where an existing catalogue essay refers to "a wampum belt [that] served as a gift, also as a binding symbol of an agreement," Hiller appends to the beginning of the entry the note: "THE MAKING OF TREATIES WITH THE NATIVE AMERICANS WAS CONSIDERED PURELY GESTURAL BY THE WHITES." (96)

This efficacy throughout Hiller's counter-practice prevents many of the pieces in The Provisional Texture of Reality from being circumstance-bound musings. It also explains how Hiller negotiates the divide between artistic and academic, the creative and the theoretical - happily critiquing the later whilst holding to herself its authority.

Hiller herself explores all these issues in her still clear and powerful talk "Women, Language, and Truth", presented at a panel on 'Women's Practice in Art', organised by the Women's Free Art Alliance" in 1977.  Hiller's central conviction is the impossibility of anybody or any-thing being fully represented by any available position. Noting how we are each "simultaneously the beneficiary of our cultural heritage and the victim of it" (115), Hiller goes on to observe that "It is always a question of following a thought, first incoherent, later more expressible, through its process of emergence out of and during the inconsistencies of experience, into language."

All this in the first two paragraphs. By the end of the talks two pages Hiller has offered, not a conclusion - "To sum up would be premature, obviously" - but three working proposals that clarify her non-positional and largely upper case free strategies:

1.all my ideas begin as part of the necessity for truth-telling in art practice;

2.not being entirely at home in the ordinary, dominant languages make this less than simple. At the same time, it gives me a wide range of options; and

3.the greatest self-betrayal for an artist is not indulging in anarchic or careless opposition to rational politics, but in fashioning acceptable SEMBLANCES of truth. (117)

Of course, over the time span and career of this book, there is the position of the Self to consider. Or, rather, such a career as Hiller's has to find its own way of not becoming a fixed position, whilst exploring a focussed range of themes, and meeting the professional and commercial pressures to make new work. Hiller herself articulates her anxieties over this in "An Incomplete Text on Commissions", a - perhaps tellingly - previously unpublished text from 2003. It also explains something of why  From the Freud Museum has become so emblematic of Hiller's oeuvre. 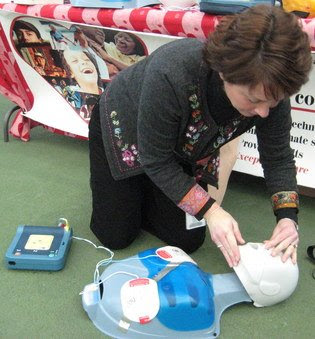 Moments before giving an important lecture about her work, Susan Hiller performs an emergency resuscitation on her inner anthropologist...

Comprehensive as this collection is, it remains necessary to view it alongside Barabara Einzig's Thinking About Art: Conversations with Susan Hiller, which gives a sense of the different forms - and image-text relationships - Hiller's lectures have employed. Provisional Textures is poised between a Collected Writings and a snapshot of a writing and talking practice as a place for theorising, engagement and public address. Even though some texts - like Incomplete -  gives a presence to Hiller's private writing, this is not a place for notes and other linguistic doodling - as collections of artists' writings often fetishise.

By the third section of this collection, however, I had begun to have a mental picture of Hiller, sifting through  a wad of invitations to conferences on art and dreams, art and surrealism, art and anthropology, art and any paranormal phenomena you care to mention, trying to select those with enough of a space of difference to warrant the inevitable repetition. One that seems to warrant the effort is a conference on Body & Soul in Edinburgh in 2000.  Hiller concludes her talk by noting, as the book began, her interest in "perspectives where figure-ground relationships can be allowed to shift" (249) and how "not editing-out and not forcing strange juxtapositions and unanswered questions to conform to theory is an aspect of my style, almost a signature."

But the talk also offers a chance to develop ideas around the body that are unarticulated elsewhere in this book. It suggests  a motivation for these writings: let the flow of one's professional life as an artist, the opportunities that arise to talk and write, be a way of revitalising thinking and artistic practice itself. In her writing-talking about the body Hiller attempts a methodology that avoids becoming 'a position' - using one's knowledge and abilities, but always willing to start again, refusing  certainties and obsessive originality, looking for clarity, the genuine engagement with the highly familiar:

The word 'body' makes me very cross when used in connection with contemporary exhibitions, art of the body, the body in art, body art, etc., etc. In my opinion, body can be evoked but not represented. Pictures of bodies I don't think have much to do with 'body.'

Body is felt from the inside ... body is empathy. Body is communicated through touch and smell as much as sight. Body in art would be traces, stains, smears, sounds, not images. Body is blurry ... Handwriting is body. Voice is body.