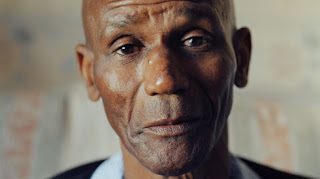 The Browning of Britannia, 14 February-18 May 2008, BFI Southbank Gallery.

Faisal Abdu’ Allah’s new film The Browning of Britannia documents and finds form for his fascination with HRH Ago Piero Ajano, a black man who claimed to be descendent of Henry VIII, living a lavish lifestyle in Park Lane apartments in the 1980’s and who now lives, still in London, in a more modest council flat.

On the four walls of the gallery are projected interviews with three figures who encountered Ago in London, each offering the story of their own relationship to him and their own attempts to relate to the truth or otherwise – perhaps, more appropriately, the unknowability – of his story. In the centre of the gallery, a smaller column offers a study of Ago: a screen on each of its four sides shows front, rear, and profile head shots of Ago against a white background. In the middle of the looped film he breaks all four poses, wiping his face with a red handkerchief.

The Browning of Britannia’s subtlety is in its physical layout and the choreography of its different visual and oral components. Stand face on to any of the screens on the central column, and the top third of the faces projected on the wall struggle to be seen about Ago’s implacable profile. Stand at an angle to the central screens and the interviewees themselves become fractured, incessantly repeating themselves as a series of blurred fragments in peripheral vision. Working within this spatial blueprint, Abdu’ Allah re-configures his limited components in varied ways, staggering images and sound, moving towards and away from any “complete picture.” One example: the wall screens remain blank whilst Ago in the central column wipes his face with the red handkerchief. When he has again settled into his four poses, a voice over starts but, for a moment, the wall screens themselves remain blank.

More sparingly used devices, include, on one occasion, the slowing and blurring of the interviewee; whilst Ago’s posing in the central column is subject to a number of jump cuts. Both these devices are correlated to moments of drama: the largest jump cut is when an interviewer relates how Ago was found not guilty of fraud. This mimics a stereotypical fusion of high emotion and style, like lovers running towards each other in slow motion. Here such moments function as points of crisis where modes and assumptions of representation break down in the face of experience. They also appear as accidents of the film making process, relating or not to the stories being told, fractures only revealing themselves to a sustained and careful viewing.

Ago’s life provides film-maker and audience with an intriguing and exotic story, and the installation plays with these expectations. I thought the interviewees would have exciting stories to tell about Ago, and I was initially somewhat disappointed to realise that what they had to say was very mundane. It is not the information they offer that is important, but the attitudes and assumptions they embody. All three interviewees conform to conventions of the TV interview, but presented so large and four fold in a gallery space, the interview metamorphoses. Their body language becomes a dance of their relationship to Ago, whilst the installation’s endless mirroring suggests their contribution is more to do with self-revelation than with telling us anything about Ago.

When Ago himself is interviewed on the wall screens, he is remarkably resistant to these conventions. His is the only interview in which we hear the interviewer, as if Ago only exists in this space at all through another’s terms and prompting. For many audience members he resists, too, through his accent (when I returned for a second visit the BFI was providing typewritten transcripts of the whole piece) and in his body language: he looks directly at the camera, as well as constantly moving, turning, plunging his face into shadow or out of frame, needing the camera to move to catch up, refusing or incapable of constructing a consistent space where interviewer and subject politely exchange information.

Alongside its critical engagement with the three interviewees, The Browning of Britannia uses still photography as its own contribution to the project of understanding Ago. One sequence on the wall screens documents a photo shoot. There are close ups of the camera’s iris opening and closing, whilst the images of Ago on the central columns appear as impersonations of still photographs. Ultimately, however, the long takes in which Ago's body twitches and adjusts, reveal the pretence of this form of representation. Similarly, the warmth and affectionate character of the production stills in the exhibition leaflet contrast with the illusive Ago revealed in a filmic portrait of the photo shoot. The true effect of photography is revealed more in those scenes that pin Ago and other interviewers against unflattering white backgrounds, suggesting prison mug shot or passport photo, ruthless in narrowing focus to an interrogation of the physical body that tells us nothing beyond a physical muteness.

Abdu’ Allah, much of whose previous work involves still photography, says in the show’s brochure that “Film was the only medium in which I felt I had the authority to tell the story without any layers of contempt or supposition.” I left The Browning of Britannia with the unsettling sense that the “authority to tell the story” comes from the fact that film knows and understands nothing, and it is in such ignorance that we must seek its particular revelation.
Posted by MORE MILK YVETTE at 16:29