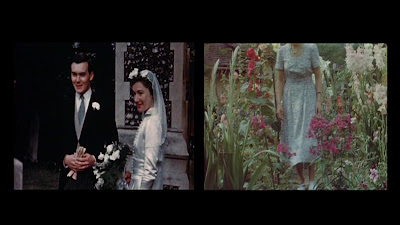 Home movies are volatile material. Wedded to everyday events of holidays, children playing, shots of landscapes, birthdays, it's a footage sure of itself and its role. But add time - or a transferral beyond the original group of people involved - and it easily becomes a mysterious, highly emotional set of images; its simple, everyday actions turned oddly abstract.

That's even before one figures in the format. Whether shot on Super 8 or early video, Mini-DV or HD, such domestic actions are freighted with the material properties of the medium in which they were recorded. So Super 8 - whose domestic use was long outstripped by its importance for artists - has, to a degree, become memory itself, as if all our past experiences have to pass through its chemical processes, get stuck in its special envelope and sent off for processing.

All of which is a way of starting to think around Kutlug Ataman's fff, currently showing at the Thomas Dane gallery. Ataman has lots of home movie footage - the fff title stands for 'found family footage' - and I'll leave aside, for the moment, the question of whose home movie footage and how he found it.

A more urgent question is how such movie footage can be responded to in a way commensurate with a contemporary artistic practice; how the emotion, memory and nostalgia of such source material can appear in the gallery with some modicum of relevance or criticality. 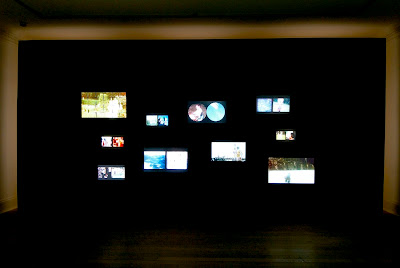 A large black wall almost crosses the gallery from side to side, top to bottom. It's placed in front of the window, so forming its own blind, light flaring around its edges. On the wall are ten screens of different sizes, each protruding from the wall wrapped in a thick black frame.

The home movie footage is translated into the gallery in various ways. There are single screen and double screen images; double-circular images, which seem to suggest some incomplete stroboscope, the 3D only coming from the viewer. There are other screens with images that are break up into squares. Sometimes the squares fit incompletely together, so the image is like six or seven playing cards. Other times, the next image forms, a square at a time, or an intervention occurs of another image into one square.

All of which highlights how Ataman is mediating this material, subjecting its filmic transience to his own digital processes. Which, amongst other things, is a way of muting the emotion of the photos, placing individual moments in broader constellations of both form  and content.  Ataman's is a gentle formalism, however. No hard edged critique of its emotional qualities, just a square screen and a round screen and a double screen. And Michael Nyman.

Playing throughout, Nyman's music loop, too, has this affection and doubleness: only a step away from a certain emotional-schmalz but always, critically and crucially, a step away, mainly via the dissonance swirling behind its simple, repeating, stabbed-out motif. Unintentionally, this doubleness is also echoed spatially: there's but a thin wall, literally, between meaningful contemporary art and the expensive tat filling many of the galleries outside on Duke Street St.James.

There are various ways of watching fff. Focus on individual screens and become aware of the actions: a child playing in the snow; rough sea filmed from a ferry; beauty pageant; wedding, and so on through a parade of family activities. I would imagine for many viewers the spectatorial default becomes a vague drifting between screens, away and back, away, back, again, for the duration of their stay. 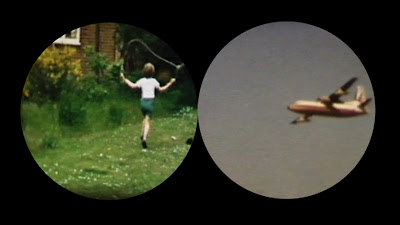 Then there's how one perceives the ten screen wall-totality. This reminded me of Isaac Julien's installation of Derek Jarman's Super 8 films at the Serpentine Gallery in 2007: a model case of how to make lots of individually fantastic films completely uninteresting as a collective. Regarding domestic footage - and Jarman's films were a special case of home movie - the very absorption of such imagery in the life depicted, makes it hard to translate into larger configurations and juxtapositions of itself.

What the ten screens of fff don't do is add up to an articulate portrait. Nor does it allow the particularities of a period to become evident, like the accumulating of details in an historians argument. Instead, it becomes almost abstract, a set of tones and moods; elemental flickering of green, blues and whites; sea and garden. Representation, certainly, but human activity becomes broad, sculptural essences of playing, dancing, standing and sitting: the artists' equivalent of rarely played Super 8 reels in a box in the attic.

Read the press release and you find out where Ataman got his footage, and, to a degree, the explanations for some of the images (lots of shots of planes = family in the RAF). The images need the text for this to become clear, and in some ways the installation is more powerful without such information. Left to itself, such imagery more reveals the specific codings of a place, time and medium poised between representation and abstraction, detail and void, in thrall and threat to both Kodak chemistry and the artists own digital manipulations.

Then, of course, there's the odd sensation that it's also you up there, round screen and split screen self, your own home movie, beauty pageant, the relatives you never knew about because they aren't your relatives, yet...