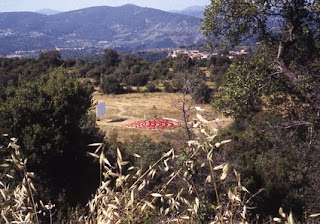 In 1967, after becoming a prominent figure of New American Cinema, Gregory J. Markopoulos took his films out of distribution and moved from New York to Europe. There he completed more than 100 individual films, editing them into the 80 hour silent film cycle Eniaios. Since the film-maker's death in 1992, his partner Robert Beavers, overseeing the printing of this longer work, has also been introducing selective screenings at galleries and cinemas, as preludes to outdoor screenings at The Temenos, an outdoor projection space they constructed in the Greek countryside. This month saw two programmes at Tate Modern. Beavers himself introduced and discussed the films, placing their reception in a rich context of friendship and relationship.

Friday's programme comprised eleven portrait films which either stood as individual films, were grouped together as numbered parts of the Eniaios project, or were extracted from a larger collection of Political Portraits. Most followed a shared formal pattern: silent, with each having a rhythm whereby images of the sitters were juxtaposed with black – and more occasionally white – screens. Beavers pointed out that some of these were edited in camera, by rolling back the film mechanically to create layers and superimpositions, but that Markopoulos had come to feel that superimposition was not enough and had edited other films on the editing table, where frames could be compared and less immediate combinations and superimpositions created. Indeed, the focus on frame – as opposed to the single frame lost in the 24fps flow – was central to these films. As Markopoulos wrote in The Intuition Space, an essay distributed at the screening:


What we are dealing with is the use of the image, a single frame, as a measured element in the construction of films. Just as we cannot imagine the meaning of the universe, so, too, in viewing on a table a single film frame or groups of film frames, we cannot imagine what they actually contain. We see the single frame. We hold it this way and that way; upside down, right side up, reversed. All sides seen and unseen. From these we begin to construct the life course, the filmic form of the work at hand…

Who can dare to imagine what a single frame might contain? What future process could activate a single frame? What action could void its singular flatness and cause the necessary Collision? Could cause that collusion which would animate the very contents of each, individual single frame?


Beavers highlighted each portrait as coming from out of a network of friendship, although with some – such as Gilbert and George – the relationship consisted largely of the meeting in Paris during which the film was made. Gilbert and George were the only sitters I was able to recoginise, thus the only ones where I found myself guessing how their identities informed the film’s rhythm. Markopoulos seemed to have responded to Gilbert and Georges constructed persona by focussing on parts of their famous suits, layering and building them up, moving gradually up the body, and tentatively revealing the whole. Space other than the body was provisional, with Gilbert and George’s posturing maniacally determined to define it thropugh its own gestures and poses.

In perhaps the most accessible of the films, Through A Lens Brightly: Mark Turbyfill (1967) Markopoulos was working in what, for him, was closer to a more conventional documentary: weaving the artists body over and above objects of art, and images of family and childhood. What differentiated Markopoulos’ film from traditional documentary was the bringing back of films linearity towards simultaneity. Again the film had a punctuation of black spaces. Beavers said he could not describe the black, but that for Markopoulos, amongst other elements, it stood for Chaos in Classical Greek thought. I sometimes felt the black frames to be gaps or intermissions, but when I could shift and see them as active elements, I found the whole film was dynamised. As for the images they interrupted: sometimes they had a duration in which the contents could be carefully observed. Often the shot was reduced to a flash, becoming akin as much to explosion and disappearance as to appearance. The films are measured not shot, said Beavers.

On the Saturday night there was a screening of The Illiac Passion (1967), a feature-length exploration of the myth of Prometheus, filmed using a cast of friends and acquaintances from the avant garde film scene, including Andy Warhol, Taylor Mead, Jack Smith, and Gerard Malanga, accompanied by a voice over comprising Thoreau's translation of Aeschylus' Prometheus Bound but which, subject to repetition and permutation, sounded like a mythically inclined John Giorno. The film adopted many of the stylistic preocuupations of the shorts: use of black screens, for example, and a focus on the body in space. But the balance was different, with little use of tiny fragments of image and a greater emphasis on images that could be perused in varying detail. There was also a variety of people within the scenes, and a greater interest in the sculptural and abstract possibilities of the specifically erotic body.

Beavers was again present to talk about the film: highlighting a sense of possibility that experimental film makers briefly felt in the period between a lifting of censorship laws – due to court cases over Jack Smith’s Flaming Creatures and Kenneth Anger’s Scorpio Rising - but before the erotic body had become an exploited staple of commercial cinema. He also returned to the balance of improvisation and measure in Markolpoulos’s films. In The Illiac Passion, Taylor Mead – whose idiosyncratic, funny but often highly irritating improvisations play out to the full extent of the reel in many Warhol films, were broken, by black screens and other performers, into tiny sections keeping his extrapolations at the level of the inconic gesture rather than his own personality and momentum. For Beavers in the Q&A this was related to how each participant in The Illiac Passion was an aspect of the myth, and one of the functions of the editing and the black screens was to allow a level of gesture and communication between and across bodies and landscapes.

Watching both these films I made no notes, and left it to the next day to see what I remembered and absorbed. Whilst images remain, there is a tendency for such films to be remembered as structures and concepts, which will always be unsatisfying to a sensual filmmaker like Markopoulos. For example, I remember a sense of friends bodies as attaining monolithic presence through simple gestures, rather than the gestures themselves. Which is why the Eniaios cycle and The Temenos screenings exist: attempts to include each viewer, too, in the process - identified by Markopoulos in his essay The Adamantine Bridge - of becoming “but the molecules of the nude protagonist, gyrating and struggling, all in love, bound and unbound, from situation to situation in the vast sea of emotion which becomes the film-maker’s proudest endeavour.”

The premiere screening of Orders III, IV, and V of Eniaios will take place at The Temenos site, near Lyssaria, Arcadia, in Greece, from June 27-29 2008 ( see image above). For further information contact mail@the-temenos.org
Posted by MORE MILK YVETTE at 09:34