IT JUST DOESN'T FEEL DONE WITH: DELEUZE, VINCENNES AND THE KENNINGTON OVAL GASWORKS 1975-2009 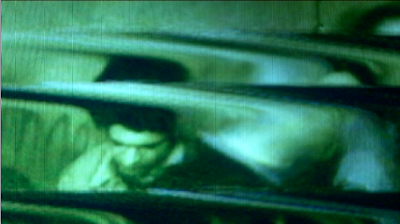 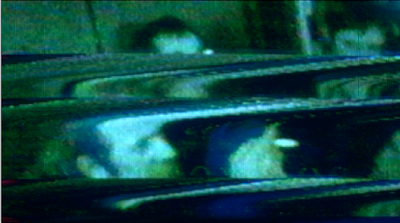 All images: Silvia Maglioni and Graeme Thomson, Facs of Life (2009, work in progress).

Silvia Maglioni and Graeme Thomson were at Gasworks on Sunday afternoon to present Facs of Life, their work-in-progress, one of whose beginnings was seeing a 17 hour marathon of Deleuze teaching on Italian television

The artists showed us some of the footage they had excitedly videoed. Filmed at University of Paris VIII in Vincennes (1975-6), it was part of a conscious attempt to "film philosophy."

The camera was passed between participiants, attempting to create a fluidity of point of view that matched the rhizomatic  and lines of flight of its subject.

The following text is both reconstruction and response, based on memory and my hand written notes during the event.

NOTE: The atrocious quality of the image made everyone almost unrecognisable. It had foiled attempts to place the footage in official archives, but fits well with contemporary concerns and Deleuze, too, cautioned against restoring it.

Thomson outlined some of the reasons for their attraction to the film, and their desire not to historicise it but to respond to the aspects that seemed still in need of response and completion.

(1)The films themselves still had the feel of rushes, remaining to a degree formless.

(2)The attraction to the material was one of desire not knowledge, as in: I want to be there and share this experience.

(3)The rhythm of the lessons themselves appeared as a musical composition of discourse.

(4)A sense of (political) urgency, but also a feeling of calm and dilation. There is all the time in the world for the ideas to come out.

intensive life... not molar but molecular... footage that exists in LIMBO:

EXAMPLE 1: When Marielle Burkhalter wanted to put them in an archive, the university said the quality was too poor and threw them away. Burkhalter was able to retrieve half of the original tapes from the trash.

EXAMPLE 2: Deleuze himself worked on a five hour edit, but was unable to clean up the image. Was this before he wrote the letter: restoring will destroy more than it will save. So the work ends up stranded

between a personal and an historical archive

in a zone of uncertainty not official

between immanence and transcendence

between Deleuze's lessons/ a university at war

an archive and it tries to destroy itself 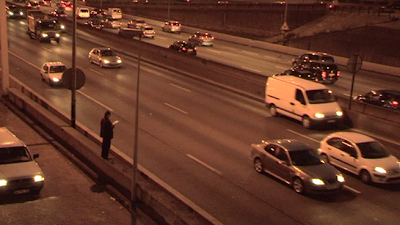 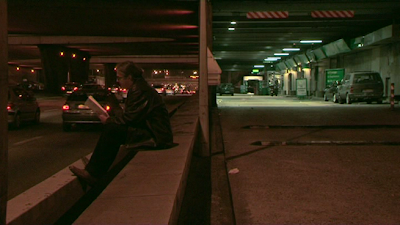 NOTE: A recognition of the authenticity of this situation is also a loss of communicating on the level of content, something which always gives a philosopher vertigo but makes certain kinds of filmmaker laugh helplessly.

Maglioni and Thomson showed some of the original footage, but their work and the Gasworks event was very much about the present, and most of the three hour seminar was a presentation of their work-with and out of this footage. 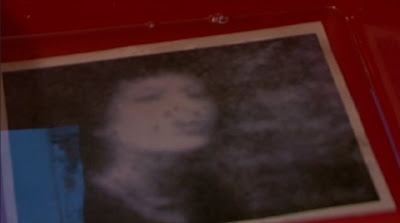 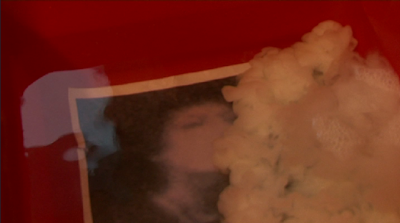 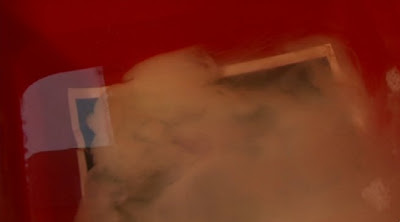 An extract from a 25 minute loop re-working images of the members of that Vincennes class. A beautiful film, almost a poetics for how the atrocious original image quality was feeding into contemporary concerns about presence, identity, pedagogy, and communication...

... in its flow and flood of presences both material and immaterial...

In the disintegrations of its imagery, it also highlighted education as the presence of physical bodies, but made it impossible to read those bodies through familiar codifications of gesture or posture, leaving

Work with the plastic matter of the archive. Multiple semiotic components. A soundtrack made of processed sounds of tape buzz, chairs squeaking, Deleuze's breath and respiratory problems, dragging between phrases

between statements, re-filming the footage in HD video, camera's green eye in the screen a quotation of Hitchcock's Rear Window, going through the screen, mirror/window/wall, transversing, Cocteau and Orphee, to see what is behind as though it's ahead of you

CONCLUSION: IMAGES HAVE MORE FUTURE OR PAST THAN THE PEOPLE WHO LOOK AT THEM IT IS WE ARE THE FRAGILE ELEMENT 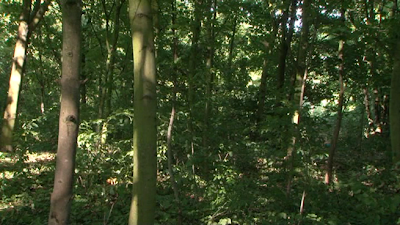 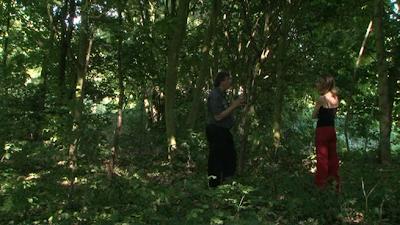 Intensive life of images in the future... it just doesn't feel done with...

The film makers decided they wanted to find some of the Vincennes students. These students, revealed in all the uncertainties of the original footage, had become fictional characters to the film-makers.

The original university had been demolished, and replaced by a woodland that revealed no traces of the previous architectural inhabitants. People who lived in the area, said Thomson, were no longer sure there had been a university...

Establish a relation with each subject, particular to meeting them. Because of the past but only inhabiting the present: A middle-aged man and Maglioni standing awkwardly in a forest amongst trees. A student stood at the side of a busy motorway at dusk, reading aloud.

The same student sat on the crash barriers in an underpass. The busy motorway in  front of him and the layby area behind. The physical landscape looks like a split screen. Then he is in a warehouse space playing the trombone...

As Maglioni and Thomson worked on their film their was unrest over educational reforms of Nicolas Sarkozy. So they filmed a group of current students at Paris 8. To respond to Deleuze lectures and mythical Vincennes. At the time of the videos, too, this was what they were asking. To be 2009 in 1972. To be 1972 in 2009.

MISREMEMBERED STATEMENT BY A STUDENT: Ideas are in corners and recesses and obscure corners. We want to be part of society. We want to articulate our immersion, not set up some sense of apartness. But there is the idea of obscure corners to be remembered amidst all this talk of education as service and normalization...

less a territory and more a trajectory... with every student an encounter... what was between us...

finding a situation for the polyvocality of a person... possible extensions of the body.. compressing then and now into a key word...

the power of an exhausted film form still retains... not between students and workers.. the university itself the factory... 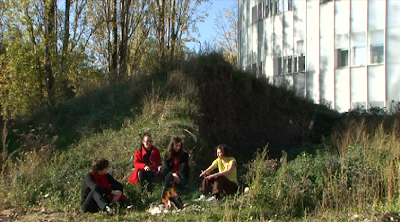 So to respond properly to Deleuze's lectures we have to attune ourselves to their qualities of IMPROPER TRANSMISSION, the qualities that do not fulfill Deleuze's edicts, where faithful becomes distance to faithfulness.

A RESPONSE: But how do you find a critical position in-through your engagement with all this material?

SOME ANSWERS: One of the students had become a philosopher and that was the only straight interview we did. It was very sad. We realized what interested us was more: how do you film a becoming of thought?

Deleuze prepared fully for the lectures, cultivated a stuttering, not knowing what he'd say at the moment of speaking, the film, too, approximating this...

The critical approach has to emerge in the films textures and in the dissonance between elements, in an IMPERSONAL CINEMA which expresses not our position but releases another body...

that gesture that way of smoking

creating a film that already existed 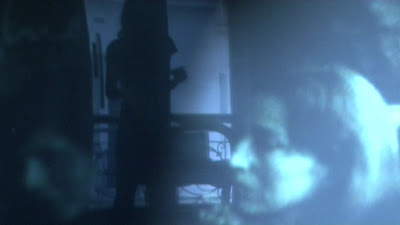 WE HAD AN ARGUMENT: How to film the student in the word-wood. The camera static like Straub filming Pavese. But we are not fixed like Straub. We do not have a fixed revolutionary position. So we make the floating version, the drift of our camera... without subjective direction...

RESPONSE: THE DE-PERSONALIZED CINEMA ALLOWS MULTIPLE VOICES NONE OF WHICH ARE LOCATED IN A BODY. IT IS A VENTRILOQUIAL AND POROUS CINEMA COMPOSED OF I SAY IT AGAIN MULTIPLE SOUNDS AND IMAGES NOT TIED TO VOICE OR BODY INTERVAL CONSTANTLY I SAY VARIES BETWEEN YOU AND SUBJECT VIOLENCE OF THOUGHT BECOMES IMAGE I

WE HAD TO VACATE THE BUILDING

Re-filming the archive and remembering the event as an image of the force of thought, not the representation of a speaker.

Think of Deleuze and the way that force of thought hits the voice. The theatre of his - our - mine - voice - there's been a crime but where is it and what are you insinuating... the storyteller has been seized

FACS OF LIFE was part of the events program accompanying A Long Time Between Suns, an exhibition by The Otolith Group (Anjalika Sagar and Kodwo Eshun) at Gasworks 15 Feb- 5 Apr 2009. The next event is Collaborative Filmmaking: A Discussion with John Akomfrah, founding member of the black audio Film Collective (1982-1998) on Wed 1 April 2009, 7-8.30.