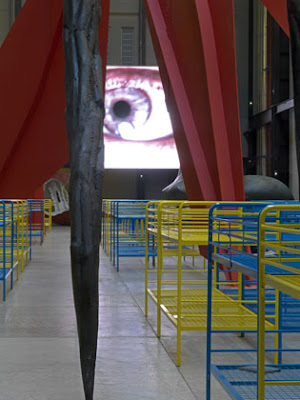 More Milk Yvette has been quiet lately, mainly because it has been off moonlighting for SPILL:OVERSPILL, a collective critical writing programme that has been taking place as part of the SPILL performance festival. The following piece first appeared on the SPILL:OVERSPILL site, and explored suggestive connections between Dominique Gonzalez-Foerster's recently closed Turbine Hall installation TH.2058 and Gob Squad's, Saving the World, Greenwich Dance Agency, 9-10 April 2009.

If Gob Squad had filmed their piece Saving the World a few months earlier, then, amongst the passers-by on the South Bank, they might have encountered Dominique Gonzalez-Foerster, off to Tate Modern to install her Turbine Hall installation. It would have been an intriguing encounter, for Saving the World and Dominique Gonzalez-Foerster's recently closed TH.2058 seem to be in conversation with one another, both through themes of archiving, saving, addressing and imagining the future, and in the boundaries they observe, re-draw and disregard between film, installation, and performance. 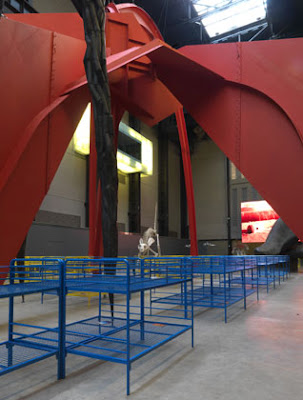 TH.2058 was an installation of beds, books, films, and other peoples sculptures, evoking a future when the Tate Modern turbine hall becomes a combined archive and air raid shelter. Saving the World sees Gob Squad spend a day on the South Bank, video recording passers by to create an archive of contemporary existence for some unspecified future date. Both pieces have at their core an accumulation and a saving. Both place themselves at the centre of London's diversity but are haunted by an experience, intuition, anticipation or memory of some ecological or other catastrophe. Both see the artist as a kind of fiction writer, scoring scenarios to be acted out: by sitting on the beds in the Turbine Hall and reading, or by asking passers-by for their thoughts on sex, nothingness, and the soul.

All this, no doubt, reflects different artists filtering the world around them with a somewhat shared sensibility, training and professionalism. As these processes manifest in the pieces themselves, Gob Squad foregrounds the newspapers and encounters of the world; Dominique Gonzalez-Foerster foregrounds a certain art history, an accumulation within her installation of certain art historical precursors (including several previous Turbine Hall installations). It's curious, then, that both end up in a similar place, suggesting art is the real news, and articulating this through a fluid sense of medium becoming theatrical.

For both Dominique Gonzalez-Foerster and Gob Squad this focusses on a sense of film. Film re-defined, partly as an event, partly as something not confined to the screen: in Saving the World people literally talk to the screen and, more theatrically, come out of and go into the screen. Entering the Greenwich Dance Agency to see the piece last week, film seemed to be becoming installation, but then revealed itself, somewhat cheekily, as theatre. One consequence of this is that the consciousness and materiality of the video itself becomes more a shared property of the whole experience than something just involving the projected image. 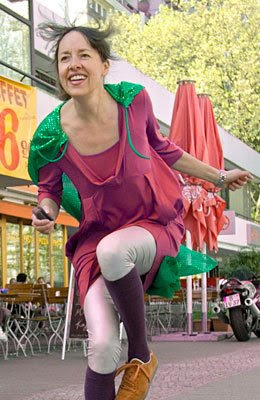 Aside from the different economies and professional networks of artists working in galleries (like Dominique Gonzalez-Foerster) or performance festivals (like Gob Squad), this is also a debate about live presence, moving beyond a sense of mediated and unmediated to a more variegated sense of liveness and place. Gob Squad's search for interviewees on the South Bank, for example, is  partly a search for those open to having part of their identity mediated (via the group's video cameras) in ways beyond their control and that they might never see. Viewing Gob Squad and Dominique Gonzalez-Foerster together foregrounds how, for all the ways this is a response to globalisation, media culture, non-place and instantaneous data transfer - it's also a working through of an artistic lineage with a particular sense of the possibility of the moving image.

A longer essay than this, for example, might use Dominique Gonzalez-Foerster's library of films screening in TH.2058 as a partial viewing companion for Saving the World. This wouldn't create a set of easy parallels. But, to pick only a few of the more famous examples, I think the suggestiveness of viewing Gob Squad in the light of Robert Smithson's Spiral Jetty, or Chris Marker's La Jetée, or Alain Resnais Last Year at Marienbad, are immediately apparent.

Actually, without checking I'm not sure TH.2058 did  include the Resnais film but it certainly enters into the dialogue, as does Warhol's Screen Tests, literally re-created in the Gob Squad's Kitchen and becoming a research methodology in Saving the World, where groups of passers-by stare silent and still into Gob Squad's cameras. Gonzalez-Foerster doesn't include Warhol in her loop of films but the aesthetics of the Screen Tests can certainly be related to TH.2058's ideal of audience participation: a figure sat on the beds, as absorbed in a book as Warhol's subjects were in the 16mm camera before them.

Relations of film and theatre is a vast topic that could be traced in essays by, amongst many others, André Bazin, and Susan Sontag. Here, I want to highlight such dialogues manifesting as uncertainty, but in different ways. TH.2058 seemed always there, its films on a loop, but then the installation closed and it vanished. Gob Squad's subjects are saved for DVD-posterity, but confined to the show's limited (and for now completed) performance times. For both artists, film promises capturing and archiving, then delivers a richer, more substantial offering of the intangible and disappearing.

Not that these pieces are at all grim or po-faced about the apocalyptic scenarios they propose, for either London or the possibilities of film. Gob Squad's attitude to such issues is summed up in the closing party-scenes of Saving the World where they cavort in bear-clown costumes made of multiple soft toys. It reminded me of Dominique Gonzalez-Foerster's artists' talk at Tate Modern in March which covered the Starr Auditorium lectern in gold tinsel and had a DJ play Latin Jazz records, before ending the evening with the lights suddenly out and a soundscape of tropical rain.

More Milk Yvette has also been writing on Pacitti Company's A Forest; Julia Bardsley's Aftermaths: A Tear in the Tear of Vision;Victoria, Tim Etchells and the Uncertain Pedagogies out of Performance in That Night Follows Day;  and Rajni Shah's Dinner with America.