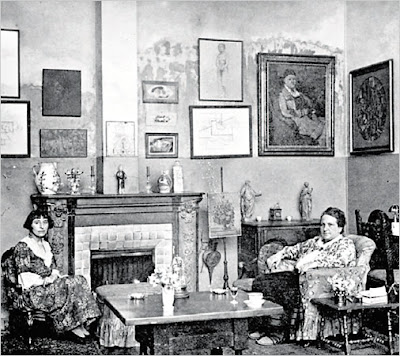 Gertrude Stein and Alice B.Toklas at home, in 1923, pre-twitter.

Gertrude Stein uses Twitter. She doesn't call it that.

Gertrude Stein lost the continuous present. Then she found it again. She called it twitter.

Alice B Toklas thinks the whole thing is ridiculous. She sends the occasional e-mail, but nothing more.

Gertrude Stein twitters in the park the park.

Gertrude Stein says a text is a text but twitter.

She is aware that it is easy to parody what one is parodying.

That it is not necessarily funny to be funny when one is being funny or not being.

And all those who twitter in 2009 are being Gertrude Stein.

And to say "I am eating my lunch" is to be Alice B Toklas.

But to say "I am eating my lunch and it is a brown cow" that is Gertrude Stein.

And it is Twitter if it is 140 characters or less.

Gertrude Stein is so into twitter that she has terminated her MySpace profile.

It is twitter that offers Gertrude Stein the chance to connect to her earliest work such as Tender Buttons.

Which is like a city or a global economy and Gertrude Stein knows it.

Gertrude Stein knows it is also the war.

She knows it is it when it is and Twitter is isn't it.

Gertrude Stein has many followers on Twitter although not Ernest Hemingway who is dead.

Some suspect that Gertrude Stein is Penelope Cruz.

Gertrude Stein knows that Twitter proves she was right all along.

Alice B Toklas thinks most of Gertrude Steins followers look like idiots.

Gertrude Stein is twittering now and has twittered and is.

Thanks to Mary Paterson, who commissioned this piece last week as part of the Critical Communities project, organised by New Work Network and Open Dialogues. Following on from a series of micro-presentations where each member had two minutes to showcase their work and interests, we have been responding to issues raised by commissioning small pieces of writing from one another.