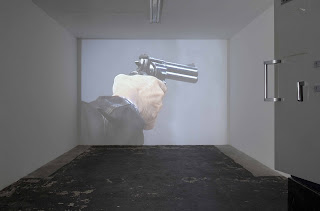 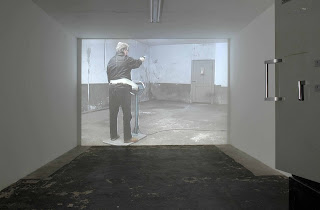 A model helicopter is balanced on a pine shelf floating down a river. As it approaches a small dam, the helicopter lifts into the air as the shelf plunges over the edge. The shelf repositions itself in the calm water beyond the dam whereupon the radio controlled helicopter carefully lands on the shelf.

Helikopter auf Brett (Helicopter on Shelf) (1998) is one of three videos on the balcony of the Hauser and Wirth gallery in Picadilly, where Roman Signer’s new London show is taking place. Having described this piece and others in the exhibition to various friends, it is Helikopter that most effectively exists as an oral story. In Wasser (Water) (2002) an air filled inflatable balloon is placed at the bottom of a small dam, the water causing it to rotate the opposite way to the plunging river. Schlauch (Hose) (2006), meanwhile, begins when water is set free to turn a mill, which, inside the mill house, slowly twists a rope to the point where a bucket is pulled over, spilling water onto the floor. For all three pieces the filming style is deliberately low-key, documenting, but Signer is watchful for moments where a shift can be made that maintains objectivity and exponentially increases impact. At the end of Wasser, for example, there is a sudden cut to inside the balloon.

These videos root the show in Signer’s on going practice of experiment and event. But the show is designed to have a more immediate impact. Entering the gallery from the bustle of Picadilly, the ground floor is littered with conventional black office chairs. A foot or so in from the edge of the wall is a thick line of red masking tape. Inside the tape, a small lawn mower powers its way around, crashing into chairs and changing direction, reaching the raised bump of the red tape and turning back. It’s a puzzling piece to encounter if you’re not expecting it, particularly given the inhibitions of gallery etiquette. The red tape, which turns back the lawnmower, also suggests it should not be crossed by spectators. Perhaps it is not safe or not allowed to enter the lawnmower’s territory? I took a middle path – crossing the line but not quite confident enough to stride across the centre of the room. Signer’s title – Stuhle (Chairs) (2007) – show his focus, prioritising consequence over agency.

Like many Signer pieces Stuhle’s effectiveness is in its combination of genuine relationships between objects, and its entropic absurdity. It reveals the impersonal to have a powerful psychological force. At times I feel such pieces can narrow to comments on the particular absurdities of artistic doing, but they also consistently open up to a broader frame of reference with their genuine sense of pleasure and exploration, their honesty about the human condition. The most insistent note is that anything emerging from a genuine relationship between two or more things is not just worthy of attention but to be prompted and encouraged. Indeed, the obsessive aspects of Signer’s practice suggest such prompting to be an ethical imperative.

Hauser and Wirth’s eccentric former bank of a building, wonderfully unlike a white cube, itself contributes to the works absurd tone as Signer’s pieces measure themselves against and out of a certain bourgeois decorum. A winding staircase leads into the basement, where Flasche (2007) comprises a half filled wine bottle propelled in a circle by a fan - a gesture that seems to offer a very human, improvisatory and low budget version of perpetual motion. Also in the basement – and one has to see more than one show here to realise the huge empty safe is not part of the installation – is Old Shatterhand (2007). A man in a shooting range attaches a motorised rubber belt around his waist which causes him to shake and vibrate as he fires and misses at a tin can on a shelf. Again Signer ends the film with a sudden cut in to the tin surrounded by bullet holes. The close up accentuates his interest in the activity, proffering the image as evidence and documentation of a process and its outcome, not of a failure to hit the target.

As an accompaniment to the exhibition Hauser and Wirth screened Signers Koffer (1995) in the BAFTA cinema next door. Peter Liechti’s film followed Signer as he carried out his experiments and performances on a journey through the Swiss Alps, Poland, Stromboli and Iceland. It showed the works in the exhibition as part of an ongoing practice. Curiously, not only were all the experiments linked by their attention to relationships between objects, but Signer often remained fascinated in the same objects and/or repeated an experiment in a different location. A piece that the first time around was funny often seemed embarrassing and disturbing when repeated. I sensed Signer felt this too, wanting to keep his work within the emotional demands and drains of such a vulnerable yet potent space; constantly using repetition to push a particular object or relationship beyond novelty.

Take the helicopter. The beginning of Signers Koffer has Signer working on a computer animation of a helicopter. The film cuts to show him in a room surrounded by numerous model helicopters, whilst the film soon shows us a “helicopter performance” where a radio controlled helicopter lingers fascinated and menacingly around the outside of a boarded up building, before flying into the wall and smashing itself to pieces with its curiosity. Perhaps, in Helikopter auf Brett, Signer finds, in the river and the shelf, a foil for the macabre energy of the radio controlled helicopter. It momentarily finds for itself and us a peculiar, poignant, and powerfully pointless peace on the way towards ideas for yet more model helicopter experiments.