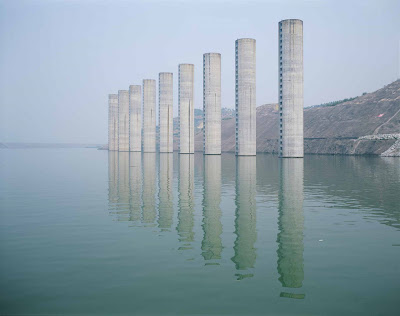 I've written two piece for the RSA's new Art and Ecology magazine, edited by William Shaw. The first was a short paragraph on Catherine Yass's Lock  as part of the site's Best of 2008. The second was an essay on fluxus scores, trying to unpack my intuition that such event-scores embody ecological attitudes and principles and, most importantly, can inform some contemporary, ecologically informed (art-) writing practice.

The essay focusses on Yoko Ono's current show at BALTIC, surveys a range of recent score-focussed exhibitions and publications, before highlighting Alison Knowles artist's  book/anthology A Bean Concordance (1983) as the most developed example I know of an artist using a score-based approach to research the natural world.

I conclude by proposing what a contemporary score-based practice might be, looking at Hans Ulrich Obrist's recent Formulas for Now project, and the pedagogical theory of Hannah Higgins, Charles Garoian and Yvonne M.Gaudelius.

The Best of 2008 piece, meanwhile, was a chance to review the year specifically focussing on work that seemed to make an effective intervention in debates about the environment. I have a broad, rough working-sense of much of the work I am interested in - and this blogzine - as "ecological' in the sense that it proposes a working system within which materials and ideas flow, generating feedback.

In the context of Art & Ecology magazine I was looking for some combination of this conceptual-ecology with particular environmental issues. Two shows seemed to possess this balance. Here is the short paragraphs I wrote about each:

High Wire, her recent Artangel commission, may have garnered more attention, but it was in her exhibition at the Anthony Jacques gallery (16 Jan-23 Feb) that Catherine Yass tackled current environmental and political issues most directly. Her film installation Lock was a response to the Three Gorges Dam in China's Yangtze River.

Whilst Jia Zhangke's Still Life - released at the same time - documented the turmoil and destruction of riverbank cities soon to be flooded by rising water levels, Lock confined itself to a journey through the dam's ship canal. Projected as two large, wall-filling images, Lock remained open and suggestive, but it also confined arguments about the dam's impact to its architectural form, highlighting loss of perspective and any sense of scale amongst its vast walls and gates.

Langjökull, Snæfellsjökull, Solheimajökull,  at the ROOM gallery in Shoreditch (25 Jan-17 Feb 2008), presented three videos of 12" records, each made from the waters of a different glacier. With needle and grooves these "glacier records" could be played like any other, sound and image changing as they gradually melted. The time this took, of course, far exceeded the average gallery visit, which meant the piece existed as a delicious idea or proposition as much as an experience in the gallery. 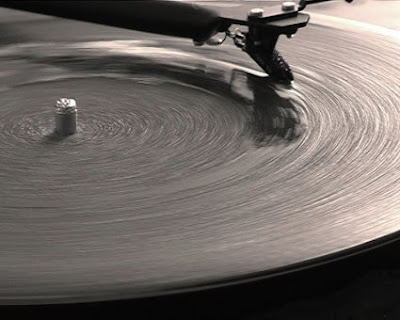 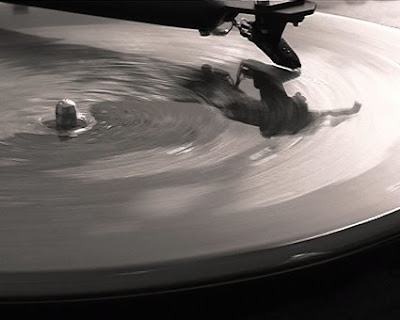 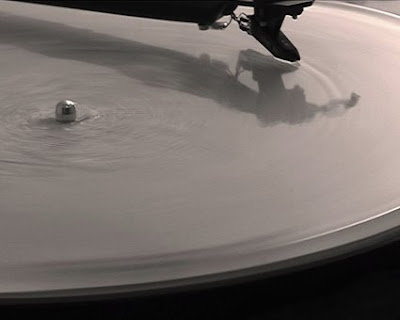 Like Paterson's other works - including a mobile phone embedded in a glacier that allowed callers to hear the glacier melting -  the ROOM show drew on a history of conceptual artists in the landscape, combining a pleasure in its own creativity and humour with a more unsettling sense of breakdown and collapse.

As for writing itself, the research for the fluxus essay, turned up two understandings of the score form that positioned it as part of a broader eco-system of writing practices. The first was by Emmett Williams - himself, of course, a fluxus writer and performer. Introducing the section he edited for  the 1973 anthology Open Poetry, Williams tells how he abandoned plans for two separate anthologies, one of concrete poetry and one focussed on the "Intermedialists", finding, in the process, a sharper focus in the concept of "Language Happenings":

They have belonged together all along. They have been separated from one another by definitions, manifestoes and self-imposed distances..."Language Happenings"  is a title, nothing more, under whose aegis a number of workers with words are allowed to coexist without labels.

All of them are involved in a new Poetics in which poetry is scurrying off the page in all directions at once - toward painting, film, theater, music, sculpture and concept art.

And artists, film-makers, composers and scientists are bringing their talent and technology to bear on the new poetry. A small part of all this activity - a part that can adequately take place in book format - is exhibited in "language happenings. (279)

A second source for this ecological score-based writing practice would be Scenarios: Scripts to Perform, a ground-breaking 1980 anthology of performance texts, which included scores by Brecht and Knowles alongside scripts in various formats by The Living Theatre, Richard Foreman, and Robert Wilson, amongst many others.

Kostelanetz observes: "It is my polemical purpose to suggest that all these possibilities belong to a single category, which I call Scenarios."(9) He explains the rationale for this all embracing category:

My editorial assumption is that innovations in theatrical art in part depend upon scripting so radically alternative it insures that a performance cannot be realized in conventional ways. If the standard theatrical script has dialogue interspersed with stage instructions and the standard work of music has notes and durational instructions written on staves in horizontal lines, an alternative script, by definition, offers other kinds of text, to induce radically different kinds of performance.