IS THAT A UTOPIA IN YOUR VALISE?: HANS ULRICH OBRIST'S A BRIEF HISTORY OF CURATING 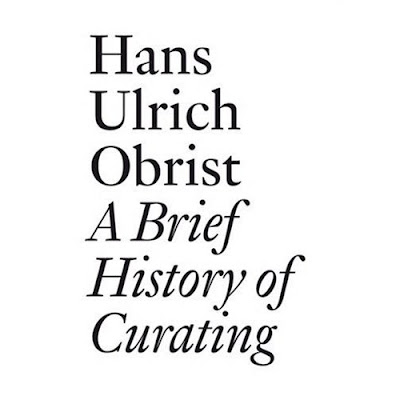 Hans Ulrich Obrist's interview project has the defeat of the book form in its sights. Spanning different generations of artists, curators, writers, architects, and scientists, its gathering together - such as Charta's 1,000 page volume in 2003- can seem unnecessarily monumental and static for a project that, by the time of publication, is already well into further real or projected volumes. Less than paper and a spine, it needs a canny database capable of endlessly arranging and rearranging its subjects according to particular themes, subjects, connections - with a LUCKY SEARCH function to enable the unexpected.

That said, I hope any self-respecting database, given the search field "curating, history of," would come up with something like the eleven cogent, perceptive interviews collected in A Brief History of Curating. If the Charta tome is a sprawling Documenta of a bookwork, and The Conversation Series a pleasing but sometimes too ephemeral show in a valise, A Brief History is about right. Although its subject area is more dispersed and fleeting, it fits alongside Amy Merchant's Challenging Art: Artforum 1962-74  as a model of oral history as an appropriate form for revealing the complexities (and vagaries) of how modern art, its practices and institutions came into being.

Gathering interviews conducted - and sometimes previously published - between 1996 and 2007, part of the pleasure of this book comes from its multiple functions. This is Obrist the curator thinking through his own practice in conversation with his elders. It is also a broader, more objective attempt to construct and document a history of exhibition making - working methods, practices, biographies, self-definitions - where it is lacking. It recognises and celebrates individuals, whilst using them as gateways to other curators, shows, geographies and ideas.

Curating emerges, then, as a profession of divergent, multi-located practices and practitioners, none of which would have used the word themselves. Thus, Harald Szeemann was originally involved in theatre, but turned to art because "it gives you the same rhythm as in theater, only you don't have to be on stage constantly." Lucy Lippard defines herself as a writer, but one for whom  putting on shows articulates issues that seem important. Such biographical variety poses a striking alternative to the latest professionalised crop of Curating MA graduates.

Obrist looks at these diverse practices and asks: what is curating? Talking with Anne d'Harnoncourt he lists the ideas that have emerged from or informed the making of this book: John Cage says curating should be a "utility"; Walter Hopps quotes Duchamp's notion that " a curator shouldn't stand in the way"; Felix Feneon says the curator should be a pedestrian bridge [une passerelle]. D'Harnoncourts own definition is one of the books most lucid:

I see curators as enablers, if you will, as people who are crazy about art, and they want to share their being crazy about art with other people. But I think they also have to be very careful not to impose their own reactions too much, their own prejudices, on other people. And that's hard because on the one hand you can only be yourself; you can only see the work that you see with the eyes that you have. I think of curators as opening people's eyes to the pleasure of art, to the strength of art, to the subversiveness of art, whatever it is. (179)

Clear and lucid this might be, but it is also, importantly, vague and amorphous. Whilst interviews like these can be used to build a history of names, dates, exhibition titles and layouts, there is a vaguer history of intention and experience filtered through memory that is consistent with the fleeting nature of the exhibition.  I found myself reading these interviews as examples of a curator's working language: a way of talking about their work that is poetic - in the sense of working through suggestion - as much as it is literal and descriptive. Is it, I wondered, in the poetic register of this working language that the legacy of curating has to be transmitted? 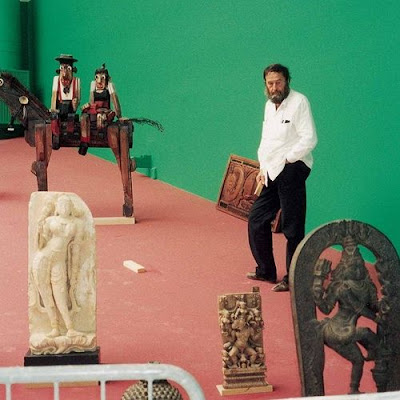 Harald Szeemann discovers that the history of curating is far stranger than he expected...

If this is the case, then D'Harnoncourt is at the more literal end of this spectrum: transmitting the curators legacy as a way of seeing - shortly after this definition she quotes Gilbert and George's phrase "to be with art is all we ask." At the other end, again, is Harald Szeemann, whose coinages for his various organisations - Agency of spiritual guestwork, Museum of Obsessions - seek consciously to convey energy like some Beuys fat piece on a chair. Such phrases have a certain continuity - perhaps we can inhabit them, take them as our own, and see what happens. They also emerge here as deeply personal coinages, articulations of private formative structures and assumptions.

If each interview proposes a private language then what of the activity that language arises to describe? Perhaps what the interview form reveals best - particularly when, as here, most subjects are remembering things from 30-40 years prior - is the curator as a particular way of thinking, responding, making connections and arguments in space and through history, geography and the contemporary. Often this involves the establishing of certain spatial coordinates. So whilst Pontus Hulten produces a trilogy of horizontally conceived exhibitions (Paris-New York, Paris-Berlin, and Paris-Moscow), Werner Hofmann observes:

I then became aware of the period of Goethe as a quarry, as an inexhaustible conglomeration of periods of artistic experiments. I worked with these coordinates for a long time. (134)

And this (conceptual) spatiality develops further as a method for the making of exhibitions:

I bored into the tunnel from two ends. On the one hand from the material that was on offer, and on the other from the theory. So both deductively and inductively. Twelve chapters arose from this about everything that can happen with art, or what it can be misused for, and what results from it. (145-6)

Hofmann's clear intellectual enthusiasm and ambition is actually a fairly understated example of one dominant tendency of many of the interviews: to see exhibition making as an attempt at utopia. All exhibitions are utopias, says D'Harnoncourt, and Obrist's oft-mentioned notion of exhibition as 'lab' seems entwined with the provisional, temporary and problematic freedom of the utopia.

However, if this book is usefully thought of as a nineteenth century novel, the key theme would be the entwining of this utopian impulse with the politics and workings of public and private institutions. So, to generalise from different interviews, we see a curators own tension between large scale, ambitious, slow to realise projects, and the need for quick, responsive, flash projects, mapped onto the various architectural and administrative possibilities/pressures of self-run projects, temporary museums, biennales, large institutions, and the creation of museums from scratch.

This, of course, is a fraught process and, for young curators, the book is a tool kit of different methods for working through such tensions. See, particularly, Seth Siegelaub and, er, blue period Lucy Lippard: dematerializing the exhibition into a box or a book or an envelope (and who both, in some sense, eventually remove themselves from curating completely). Or Pontus Hultén, whose work is invested in creating a new kind of museum, perhaps closest to the multi-focus and activities of, say, Tate Modern today. Or Szeemann, again, dependent on the resources of large institutions for his huge projects, then withdrawing from such organisations and making a show in his own home of his father's barbering tools.

For the more practically minded, this story can also be told through its details: changes to the number of shows per year and the speed of turn around, the presence or not of administration, insurance and security. Most interviews lament the passing of a more relaxed time, when a Mondrian could be casually transported to the gallery by a curator in a Taxi. Then, too, there is the articulate and moving discussions of the role of a permanent collection, its dialogue with the seemingly more exciting world of temporary exhibitions. Hultén hauntingly points out that without the permanent collection ones work can disappear overnight, leaving no trace.

Obrist himself, meanwhile, is much more a participant in these dialogues than many of The Conversation Series, where he takes the role of enabling his subjects to express themselves fully within an unquestioned aura of their own brilliance. Here he is more particular, trying to place his own research in juxtaposition with his subjects, fleshing out the name or isolated fact, always with the oft-declared aim of making - in Eric Hobsbawm's phrase - "a protest against forgetting."

As, too, the history he chronicles ends with his own pervasive curatorial presence. The dexterous shifting from small to large, near and far, lasting and fleeting, that Obrist presents, is very much what he himself has made a rule of the game. On the evidence of these interviews, I'm not sure it's a dance that those before him were ever able to sustain for very long. Instead what this generation seem to offer the present - or what is amenable to transmission through the interview format - is more a call for a bold method of thinking and acting, practical and utopian both, constructing a history that enables a dexterity of both location and movement.

Another interviewer would maybe have had other more challenging questions: about ambition, power, and career, and how the developing of curating went along with the development of the market. But such oral histories as these are perhaps only possible as a conversation amongst colleagues. A critical perspective would require another method and purpose entirely. This book, instead, is the recognition and the party.