THE PAINTINGS OF MARIE MENKEN 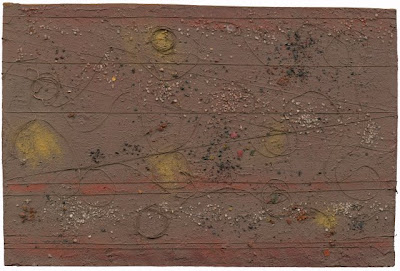 Following last November's articles on Marie Menken, I've had a very enjoyable e-mail conversation with Douglas Crase. Crase, a poet and essayist based in New York, came to Menken when researching Both: A Portrait in Two Parts, his 2004 biography of Dwight Ripley and Rupert Barneby.

It was Ripley and Barneby's Wappingers Falls garden that featured in Menken's film Glimpse of the Garden. Ripley also figured as patron and supporter of Menken and The Gryphon Group, founder of the Tibor de Nagy Gallery, small press publisher, and writer and artist in his own right. It is this last category that Crase has done much to promote, curating both Unlikely Angel: Dwight Ripley and the New York School (Poets House, New York, Feb 9-Mar 18 2005) and a recent portfolio of Ripley's botanical drawings in the excellent Esopus magazine.

As the Tate Modern gathering made clear, there is much that remains unexplored about Menken's work and life, not least her painting. Crase included If Earth in Earth Delight in the Poets House show, and I'm grateful to him for supplying both the JPEG above and images of five further paintings that were part of Dwight Ripley's collection upon his death.

How many other paintings exist? Crase knows of some with Menken's relatives and friends, whilst Menken was also commissioned by Lottie Rothbard to decorate a folding screen with one of her sand paintings. This was later donated to Anthology Film Archive.

Back at Tate Modern in October Melissa Ragona said in her presentation that she and P.Adams Sitney were in dispute over the relevance or not of Menken's paintings to her work. The art crit of the jpeg is a highly precarious foolishness, but, looking at IF EARTH IN EARTH DELIGHT, inparticular its application of string and sand, I couldn't but think of Menken's movements in front of Mondrian's Broadway Boogie Woogie in Mood Mondrian. 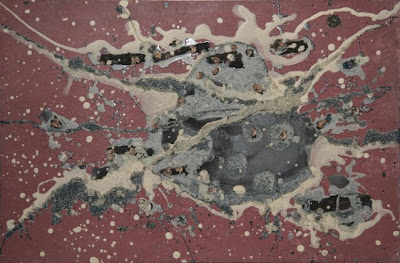 So what do we know of Menken the painter? As Crase summarises in Both: A Portrait in Two Parts:

In Menken, Dwight had spotted a companionable eccentric who shared his love of colour and expressed it, as did he, in unusual ways and with unorthodox media. Menken was known initially not for her films but for her paintings she made from sand and other nontraditional materials. Her first show opened at the Betty Parsons Gallery in November 1949 (the show that followed hers was Jackson Pollock's), and her paintings were described before the opening by F.Y.I, the employee newsletter of Time,Inc., where she worked as a night clerk on the overseas cable desk. According to F.Y.I., her paintings were made from "stone chips, stone powders, marble chips, marble dust, ground silicate, sand, cement dust, luminous paints, glass particles, glues and lacquers, occasionally string and fiber. " So Dwight was perhaps right to call these paintings desertipicti; the species epithet means "of the Painted Desert." Menken had a second show at Betty Parsons in February 1951, and her third, held at Tibor de Nagy the following month, featured Pollock-like swirls of phosphorescent paint that glowed in the dark. (182-3)

Crase notes Menken's show's received the usual, cursory mention in the New York art press (all shows received brief, paragraph long reviews in Art News or Art Digest), where it was deemed "decorative." Judging from last years Tate conference, the main value of the history Crase and the images here outline is to evidence something of the scope, presence and quantity of Menken's paintings.

From the reproductions, I begin to discern a frame of reference: to the scrawl, ideograph and writing (Klee), the use of materials like sand (Masson), the role of gesture as it configured in abstract expressionism. Her use of found materials, the flat surface of the picture frame, and bright phosphorescent colour further confirms a sense of Menken's work as being both inside of outside tendencies we might now identify with Pop and Minimalism.

Without the paintings themselves to examine, one key source is the titles - a full list of which, from the 1949 Betty Parsons show is reproduced here. Menken's titles for her paintings - often written on labels on the back - at the very least reveal something of her process, and examples of what grabbed her attention.

Doctor Coon's Ghar Hotu, for example, derives from the report of Dr. Carleton "Cannonball" Coon's discovery of prehistoric hominid remains in North Iranian cave of Ghar Hotu in "Diggers," which appeared in Time, May 7, 1951. The full text of this article is online here. 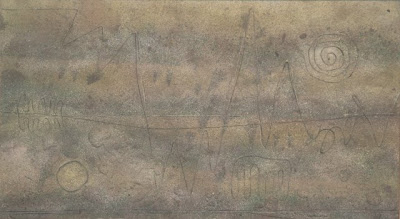 The meaning of IF EARTH IN EARTH DELIGHT is unpacked below. The following are an edited version of Douglas Crase's notes from our e-mail conversation Nov-Jan 2008-09:

Menken's paintings are . . . "idiosyncratic" is the word likely to be employed. She experimented with sand, string, glass--like a Julian Schnabel aforehand, though on a human scale.  The paintings are on masonite (board), not canvas.  Except for one, which is on brown paper that has been crumpled, rubbed with what appears to be colored pencil, and then stretched more-or-less flat again.  The masonite, at least in the case of IF EARTH, appears to have been trimmed by hand–which explains the irregular edges of the image I sent you. 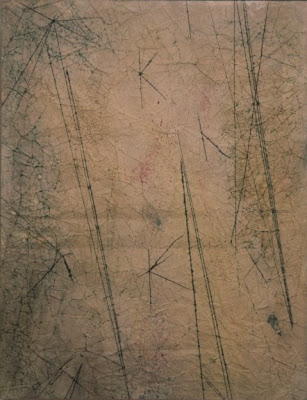 The paintings on masonite, including IF EARTH IN EARTH DELIGHT, are stuccoed with sand, strings, beads, glass, etc. They are not all so brown as IF EARTH.  One is mostly green, as I remember, another reddish.  Another has Pollock-like swirls of phosphorescent paint studded with tiny shells. I did not know it was phosphorescent until one night I went into the dark basement where all the Ripley stuff was being unpacked . . . and got quite a start.

It seems pretty clear Menken liked the play of light, just as she says somewhere. Because of the raised and encrusted surfaces of the paintings the light dances or changes patterns according to your angle of viewing–even in the work made from dull crumpled paper.

While Martina [Kudlacek] was making her documentary of Menken, she preserved for Anthology Film Archives footage Menken shot in Guadix Spain [Gravediggers of Guadix]  during the same 1958 trip with Kenneth Anger which resulted in her Arabesque for him at the Alhambra. The Guadix footage is unforgettable. Spooky monks, who look like they will retire to their cells to flog themselves or each other, are repetitively spading, spading, spading the red Spanish earth . . . and Menken's camera goes to that earth as if it can't help itself.

The effect, I remember, is exactly as you say about her camera: it's stop-start, momentum infused with the potential of interruption, lingering and delay. I even seem to remember that the earth hits the lens at some point....

The comparison to IF EARTH IN EARTH DELIGHT is dramatic. The painting was shown at Betty Parsons in 1951 and the film wasn't shot until 1958 but in each the texture, the color, the granularity–even in a way the non-translucent limits of the dull, unreflective medium of earth–are made to do a lot of esthetic work on our behalf. Put this similarity together with her George Herbert title (it's from the poem "The Priesthood") and one could work up a whole exegesis. Speculative, but then, she's the one that picked the title.

The stanzas in the middle, where the title comes from, are so much to the point that she could not have been innocent of them.  "Yet have I often seen, by cunning hand / And force of fire, what curious things are made / Of wretched earth." And next:

But since those great ones, be they ne'er so great,

Come from the earth, from whence those vessels come;

So that at once both feeder, dish, and meat,

Have one beginning and one final sum:

I do not greatly wonder at the sight,

If earth in earth delight.

Regarding Glimpse of the Garden, Crase observes:

The garden where Glimpse of the Garden was made was, of course, an "English" rock garden in style, even if the plants were largely from the North American west. Menken, having met Ripley and Barneby in 1943, would have known that garden from the day it was first spaded to its apotheosis as a sanctuary of rare species. So there could be history as well as momentary perception in her camera's attention. 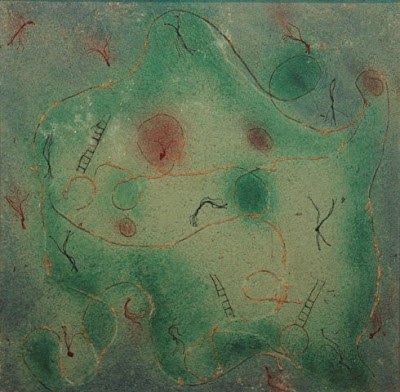 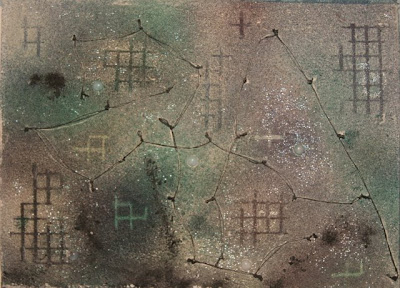 As for the the acknowledgment "with thanks to Dwight Ripley for the garden and romaine."  Ripley financed Menken's trip to Brussels (and perhaps he paid for the film and other supplies, as well).  If you think of "romaine" as "lettuce," which is slang for money, then suddenly the thanks are timely and not redundant.

Ripley and Barneby's library is full of books by and about English gardeners. Ripley's early influence, as you probably saw, was Reginald Farrer. Clearly, wherever Ripley went, he was trying to re-create the English country house of which present-day movie-makers can only dream. Menken's film is deeply indebted to the history and traditions of the English rock garden, was practically made in one, while the accents she heard at breakfast drinks and dinner in the house where she was staying were as posh English as they could be.