LINDSAY SEERS: IT HAS TO BE THIS WAY 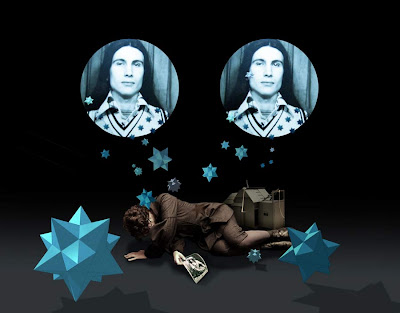 Lindsay Seers, It Has To Be This Way, invitation, image, Matt's Gallery, 2009.

There are various levels - literal, metaphorical, visual, textual, architectural, temporal - to Lindsay Seers It Has To Be This Way. One could start writing from the position of either, producing a set of quite different- even opposing - responses. Or maybe they would all end up much the same, I'm not sure. It's like reading a novel by randomly opening it at different places (an appropriate analogy for a show that comes with its own free novella).

Shown into the space by a gallery assistant, I encounter a large geometric construction - hexagon maybe, but I didn't count the sides. It's rough built, like a life-size maquette. Enter it and you find a looped thirty minute film projected. Enter at one particular moment and an animated version of the shape in which you sit is rotating on the screen.

Should that be screen or screens or neither? There are two round discs of identical projected image, like looking through binoculars or the two images of a  stereoscope. Although, of course, these images don't align to make a third - or, if they do, that trick 3D is the space in which we sit, the conceptual constellation of the whole piece - which includes the novella and a further video piece on the shapes exterior.

Not, as Seers work seems to emphasise, that is anything less of a trick. It's the trick of tricks, and her work has often sought to deepen, absorb, and internalise that trick, not lessen it. Take earlier work in which her own body can be camera or projector, or a narrative in which she was mute until encountering a photograph of herself, whereupon language arrived in a rush (both part of her contribution to the current Tate Triennial).

Don't, the suggestion seems to be, confine the activities of projection and recording to that thing-called-screen, its comfortable, deluded separation of subject and object, research and experience.

Key to the film inside the maquette is a voice over by S. Because the whole things on a loop, and you enter wherever, it might be more useful to list what I remember rather than trying to re-construct some narrative:

S is narrating his relationship with Christine. There is a motorcycle accident in which she suffers memory loss and ends up in hospital.

Christine is obsessed by the Swedish Queen Christina. S encounters her as a mix of lover, mother, and sister. After their relationship is over she comes to him in an astral dream and makes love to him as a man, which he finds strange but accepts because of their previous intimacy.

S is an actor, who is taught an intense version of The Method that acquaints it to trance. The intensity becomes too much during a performance of Stringberg's  A Dream Play, and he has a breakdown.

Which, as a change of life direction, must really make you feel the universe is trying to teach you something.  But such recollections of plot points always feel frustrating, as if I wasn't paying attention. In It Has To Be This Way this inevitable audience amnesia suits the piece. S's narration has an authoritative tone, which Seers undermines by manipulating the recording, creating slight hesitation, emphasising mispronouncing of words, punctuating with silence the white noise of the recording. 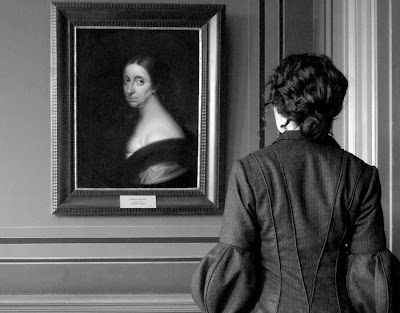 A similar mix is evident in the images. Too literal a connection of image and text is usually death for the moving image installation. Seers "trick" seems to be to respect that rule,  but also to produce something which approaches that quality of illustration, so that image and text become one. But what would that be? For all that it seems illustrative, take away the narrative and the likelihood of reproducing S's narration in images would be like monkey's typing the bible in one take.

The film inside the maquette is preoccupied with oneness, often through sexuality and gender: S's fantasy of lover, sister, mother in one; or Christina's hermaphroditism. A second video on the external wall of the maquette takes the form of an explanatory, contextualising documentary. Over animated images of the maquette itself, subtitles note the meeting of Seer's parents that brought Christine, the artists half-sister, into her life; confirms S as Christine's boyfriend; reiterates Christines motorcycle accident, memory loss, and disappearance. Extra layers make this a kind of art world meta-fiction: the film historian Rachel Moore recalls meeting Christine at Gasworks and discussing the Renaissance.

It's appropriate that such discourse is physically positioned on the margins of this piece. For Seers, the informational is working on an emotive, associative level. For the alchemically-clueless this is also where the maquette shape is revealed to be an alchemical crystal, an alternative end point to the turning into gold, representation of oneness. This crystal shape makes the piece like a Russian Doll: the shape itself, it also appears projected inside it and outside, being fact and memory, original and copy. 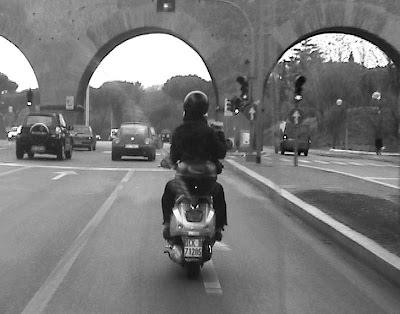 This second video also explores the role of Queen Christina, with scholars offering thoughts on her manuscripts, her interest in alchemy, spiritual practice and hermaphroditism. This culminated in the excavation of her tomb to retrieve her skeleton and see if there was something unusual about her anatomy. Christine - the half-sister - dresses up as Christina (as Seers did when making the piece in Rome). One C becomes a way of discussing the other C becomes the S that is Seers and the S that is Strindberg becomes all pretty much indistinguishable.

The physical presentation of all this information involves giving both family trauma and the promises of alchemy a rough, DIY materiality. It's present in the rough, plywood construction of the crystal-cinema, and how its benches are uncomfortable, slightly too wide to either sit or lay out on. As, too, it comes back to that binocular like projection: promising a close-up, but producing something far more enigmatic, highlighting the close-up as where the enigmatic works its molecular magic.

Don't worry what's true or false, this piece says, but accept the textures of fiction. This way of inhering in the world is encapsulated in the properties of the still photograph (Christine, according to S, becomes terrified not of the image but of the act of photographing). Projected and moving images in It Has To Be This Way seem to be partly refusing that status in order to hold to the disturbed, still, and erratic resonance of the punctuum. As, too, for all the extension into book, film, and installation, the pieces meaning is also forever condensing into some glyph-icon.

Photographs, for Seers, become the key example of that alchemical momentum towards oneness. A chemical fickleness ties them to any story that comes along, destroying history, place and time, and, like Christine/Christina herself, mesmerise us in(to) acts of getting lost.