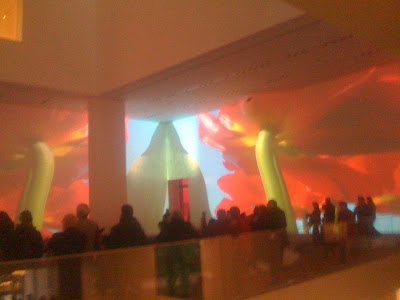 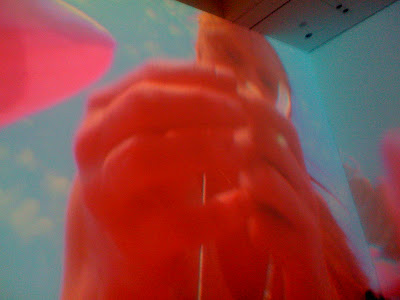 New Yorkers are loving this Pippilotti Rist installation in the new MoMA's atrium.  I'm sure they wish it would stay forever. Not necessarily for the video itself, which slathers the three walls overlooking the 54th St. lobby in brilliant blues, greens and pinks.  But because there has never been such a wonderful place to slip off your shoes and take a nap in the whole history of this noisy, cold, overwhelming city.

The work itself is environmental. It's like a big regressive fantasy, where the images are so much larger than we are. It has the scale of looking up at people when you're two years old and everyone and everything towers over you.  It's the perfect womb in an imperfect world.

The walls offer three separate but inter-related projections of images using grass, fruits, water, kids splashing, trees, rotting vegetables, other garbage, and, of all things, a warthog. But only on the lower third of the atrium, the remainder of which is inexplicably bare. 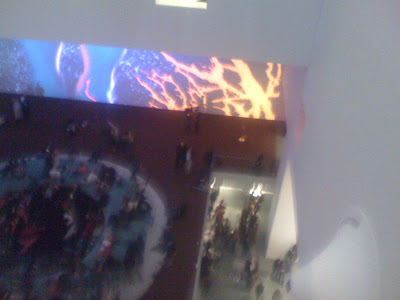 Rist uses photonegative color DV, which creates bright hot pink and lime greens, and slo-shutter speed - and underwater shimmery blues - with the camera hovering between under and just at the undulating water line. At one point, a nearly naked girl swims, looks down at her own body, her breasts bobbing just above the water's surface; when she stands, we can see she's got her period.

It wasn't until the third visit that I actually saw this, because virtually no one sits and watches all three screens as if it were, say, an Isaac Julien three-screen narrative piece. The three walls can only be fully seen at the same time by sitting against the glass partition thinly separating a viewer from the lobby below - by far the worst place to sit in a space otherwise designed for lolling about. 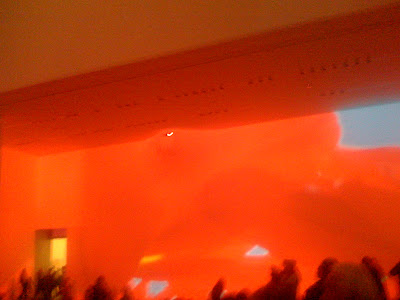 Hence the supposedly radical use of menstrual blood doesn't look radical at all. It merely suffuses everything with with an inexplicable pink. Of course, Rist has always had this little-girl's-bedroom palette, so that's fine - and I doubt whether very many of the thousands of people who've been going up to the space and getting drenched in this pink fog realize that's what it is: menstrual blood floating in water. You have to glance up at just the right moment in the 16-minute cycle to see the girl's lower body emerge from the water with her white underpants stained red and dripping between the legs.

Even then, it seems, perhaps, to be a trick of the eye, so quick is the shot and so deep is our taboo at the public showing of menstrual blood. When I finally saw it, I clenched in sympathy - the one thing every working Manhattan woman has had to do at some point in her life is frantically borrow a tampon from a total stranger in a bathroom, having miscalculated this ridiculous burden yet again. Somehow I felt like this girl on the wall was one of them. I bet a lot of women had this same reaction, without even realizing why.

So I do applaud Rist for getting menses on the wall of MoMA, albeit in the cutest possible way.

From a video POV, all of these techniques have been used forever  (I ran into Barbara Hammer at the last day of the MoMA Miro show - she'd just passed through Rist's atrium. In her sixties now, Barbara looked at me quizzically and said: didn't we do all of this already in the 70's?).

Blowing these images up to the scale of three film screens doesn't feel so much new as it does retro, downright comforting. It's a wonderfully intimate use of public space, because of the vast circular couch in the atrium that people lie down on and sit in the center of, shoes and boots off, computers out, weary tourists napping, bored children being read to by parents happy to have a place to sit, people splayed out like the workers in Brueghel's Harvesters - while pink video flutters around them. 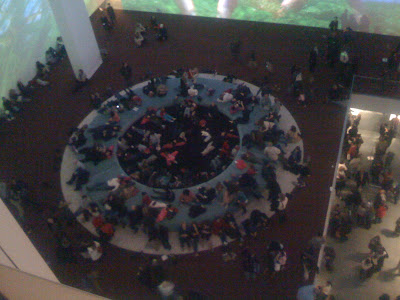 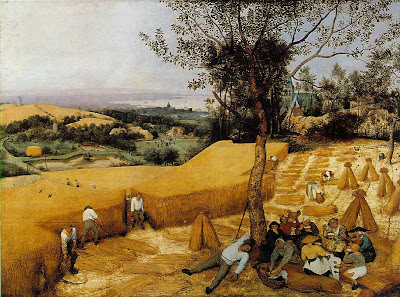 It's lovely, but somehow not a very innovative use of the language. It's the 'wall as screen' - a way to make people feel safe in the presence of a never-ending video bath. It's the idea that anything projected on a screen has to be more real and better than mere reality itself.  Also, strangely, there's no back on this huge circular couch, so it seems one is meant to lay flat and look up at the ceiling. But the minute one does, one is punished with an unadorned, remarkably ugly view of the actual ceiling, five stories above, with its  flat, dirty-white panels. 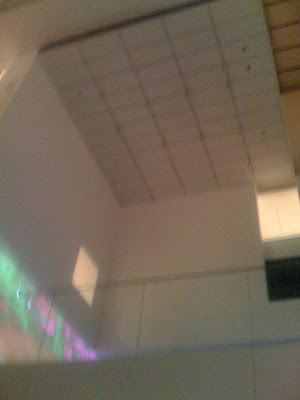 And two-thirds of the atrium is just ordinary white wall. I wonder why Rist didn't use more of the space, especially since this magnificent couch practically demands we look up - into nothing.

But most of the people on this couch aren't even looking at the video on the walls; they're bathed in its low light, the dimness itself - dark, heavy pink curtains block the daylight out on all five floors - creating this unacknowledged intimacy, like the color of a living room with only the Christmas tree lights on.

Meanwhile, an indecipherable, deep drone permeates the entire museum, so that entire atrium  serves as some kind of alpha-wave generator - or low-sensory soothing machine. Everyone sinks into it, and no one asks why.  Manhattan could certainly use more of these. Rist should patent it. 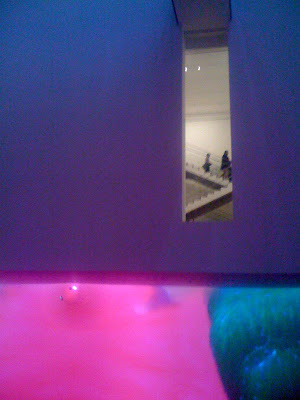 One thing I did like was that as one goes up the six levels of MoMA you can look down and see these weary visitors and New Yorkers getting tinier and tinier lying on this huge circular couch (which is supposed to be an eye, apparently; someone told me they read on the wall from Rist). The video becomes mere trimming to this wonderful Brueghelesque sea of humanity - literally, because the imagery is so often watery, and becomes so reduced as a percentage of what one sees as one moves up. By the time you reach the sixth floor and look down, it's as if you're watching the densely-populated ocean floor of an endless pink sea.

At the first balcony, the closest to the landing, there was a moment when the far side of the three walls was showing water and reflections and sky in it. All this on the very wall that first had the Monet water lilies on it when the museum opened- whenever it was, three years ago now.

Just for a moment, it looked like a video version of that Monet - I loved that. When I waited to re-see that image back on the atrium floor, I saw that it was only briefly that watery puddle. Then the camera moves along and starts taking in all kinds of smashed soda cans and other garbage... in slo-shutter speed. And a child skips through the water, sending splashes out to the screen. So I don't know if there's a meaning there or not.

Julie Talen is a filmmaker and writer based in New York. Her multi-channel film Pretend will be released on DVD by Re:Voir in 2009.