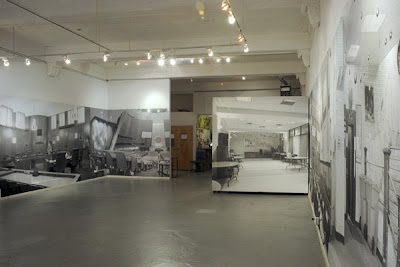 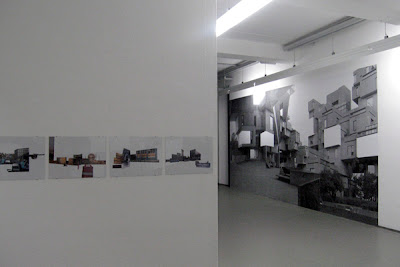 For their artists' project for More Milk Yvette, the Vancouver and Vienna based artists Sabine Bitter and Helmut Weber provided images and texts related to three recent projects, along with an invitation to create a blog post presenting the individual projects by drawing connections between them.

This is that project, and it is appropriate to the work of these artists that what is presented here both documents, continues, and transforms, becoming another layer of dialogue and exchange on top of both Bitter-Weber's original projects and the social situations they sought to articulate and contribute to. But dialogue and exchange of what kind?

The three projects were:

"WE DECLARE": SPACES OF HOUSING  (2008), based at Gallery Gachet in Vancouver. This engaged with the physical spaces where decisions about housing are made, on different scales from local communities to the United Nations. The project extended from images into debates and discussions under the auspices of The Flying University. If the images originate and resonate across diverse geographical situations, the project also had a local function, chronicling the impact on housing issues of the Vancouver 2010 Winter Olympics.

PLUGGED IN, FENCED OUT (Site specific installation at the Fotohof Gallery, 2008) also sought to create dialogues between different visions and actualities of urban space. It juxtaposed Moshe Safdie's Habitat 67 - a residential compound designed for Montreal's 1967 Expo - with collages of images where the utopian modernist vision is upturned, becoming container villages and compounds. Fotohof Gallery provided a context where the artists' research could be presented large-scale as black and white wallpaper. 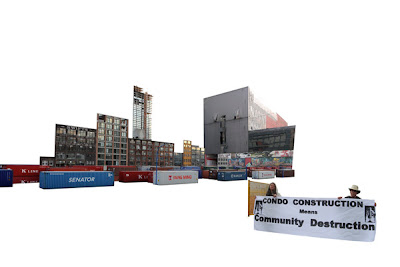 NEW, Novi Beograd 1948 - 1986 - 2006 and Where Neither The Public Nor The Intimate Find Their Place, were a video and ASCII-print respectively that formed the artists' contribution to Differentiated Neighbourhoods of New Belgrade (2007). Here issues about space, agency, development, local and global, and the artists' own contribution to such debates, became focussed around the notion of neighbourhood. The following is Bitter and Weber's own writing on this subject:

NOTES TOWARDS AN OPEN PROJECT

IN OUR CONTRIBUTIONS TO THE PROJECT Differentiated Neighbourhoods of New Belgrade we began with an understanding of "neighbourhood" not as a particular area or district of a city, but as a place where the local subjects are continually remaking their neighbourhood under and through a dynamic configuration of social relations. A neighbourhood is both a space and a process which must negotiate all of the pressures and possibilities coming from a range of scales (the local, the national, the global, etc.), but also a configuration that is ultimately mediated through the urban condition.

Affective connections to place make neighbourhoods a strong site of localized histories and textures of life, yet within the current global-urban nexus, neighbourhoods carry both a residual structure of a time when the nationstate had a very different hand in shaping daily life and an emergent structure that is brought on through neoliberalism as a globally migrating principle of commonsense and a regime of regulation. Neoliberalism pries open neighbourhoods in various ways, privatising common spaces, radically altering the rhythm of social reproduction, and emphasizing property rights of the very localized histories that have such a strong affective pull.

In particular, we are interested in the imperatives of a self-organisation and self-management that occur in neighbourhoods with the arrival of neoliberalism as apposed to the possibilities of forms of self-organisation that emerge "from below". Neoliberal policies, regulations, and pressures are pulled down, so to speak, by local and national institutions and governments, but they meet resistance and reshaping as they are applied or wedged into neighbourhoods and urban territories.

Within this, perhaps a new understanding and mobilization of "autogestion" (in Lefebvre's terms, a collectively organized mode of self-management) is driving the production of urban space as the neoliberal moment begins to weaken. In terms of former Yugoslavia and New Belgrade, self-management has existed at the state, urban, and neighbourhood scales. Today, the particular urban dynamics of New Belgrade carry this history into the present complex global-urban nexus.

This project is not about documentation. I am interested in what happens when these projects appear on the More Milk Yvette blogspot. How does this space continue each project? Is it a way of disseminating ideas and continuing conversations more widely? Or is it, instead, closing down such debates, removing them of the specificity and context they need to be politically effective?

I explored these issues working with the jpegs Bitter and Weber supplied. The images came in a single zip file, and it was easy to slideshow through them, ignoring what project they originally came from. I arranged the images into two small exhibitions of seven images each. 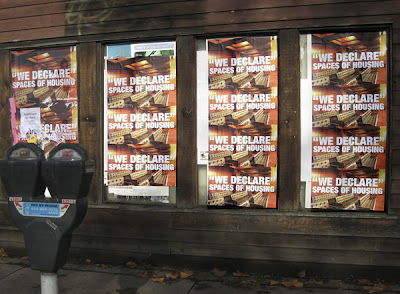 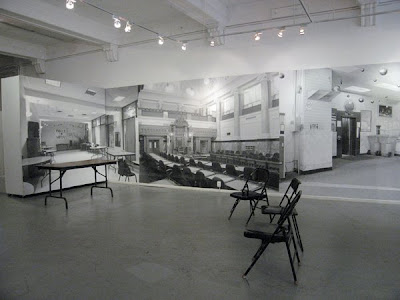 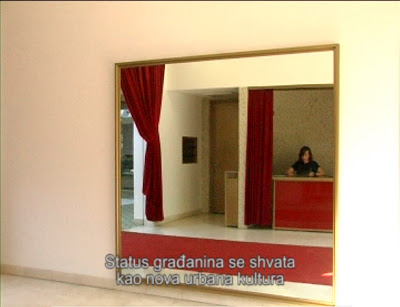 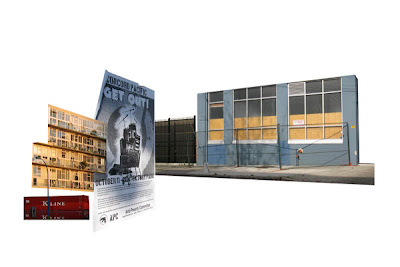 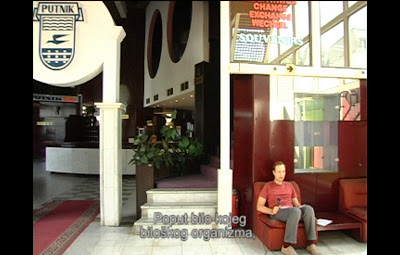 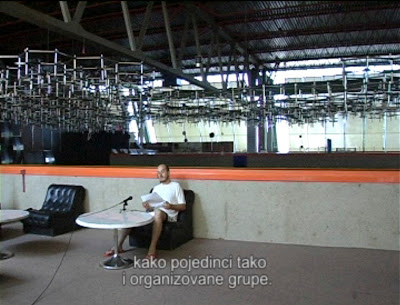 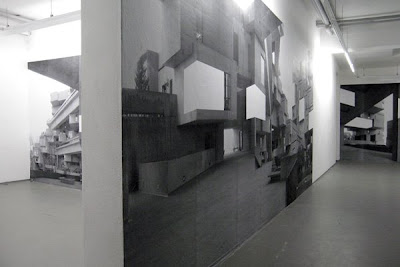 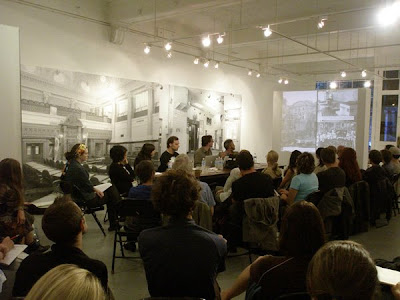 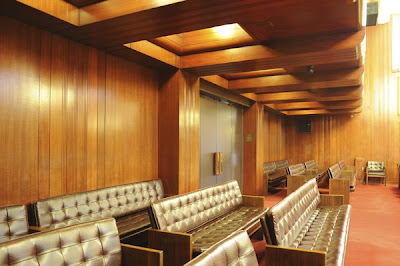 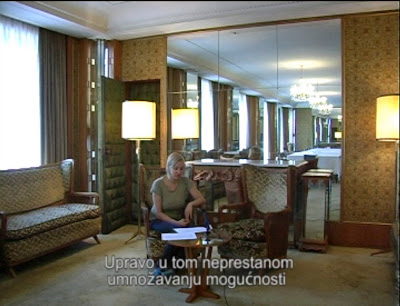 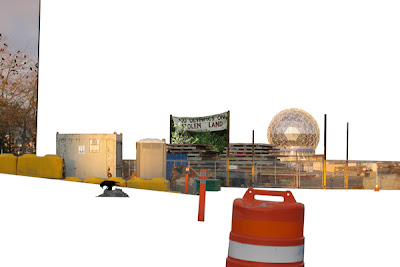 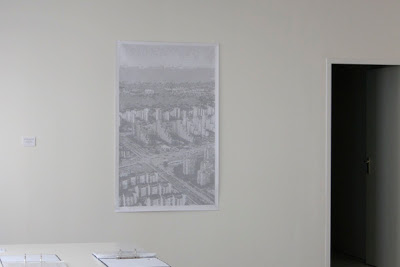 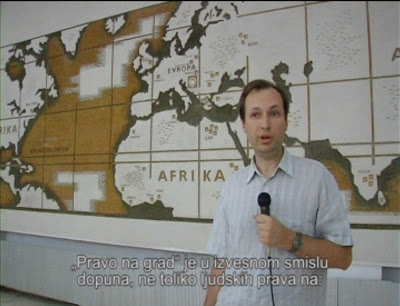 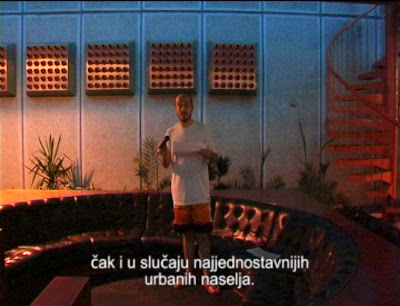 Putting these sequences together, I worked quickly and intuitively, initially knowing little about these projects other than their jpeg incarnation. Initially, I thought my choreography would be principally aesthetic - making sequences with visually appealing through-lines in terms of shape patterns, eye lines, colour and light.

But actually, rather than referring to specific projects, the images referenced certain categories of space: models, exhibitions, television; the spaces of governments, local community and activist politics; gallery discussions. It is the combination of these spaces in interaction with certain formal qualities that I felt I was choreographing. Sometimes vaguely, sometimes more definitively. It was the movement between these jpeg spaces that was the blogspot continuation of Bitter and Weber's original work.

The end of each sequence felt particularly potent. How to forge a discussion, but leave open? How to be specific enough to let concrete ideas form, but how also to open up a broader space of discursive possibility?

In their own writing about "We Declare": Spaces of Housing, Bitter and Weber observe:

The exhibition is a platform, a mixing machine, and a declaration that begins with the notion of art practices as an imperfect yet necessary form of public research in a time when the spaces and ideas of what and where the public might be are under pressure.

STILL TO DO: Trace these sequences, each image, back into their original projects, highlighting what emerges, vanishes, transforms, deletes, dialogues, translates. Go back to the artists and original participants, see how their experiences feed into this new score, punctuate it,  create a further landscape that will once again need text, physical space, talks and discussions, other websites, blogs, too.

These sequences have no answers.

There are many other sequences.

This project is about a blog.

This project is not about a blog.