FREE PRESS WORKSHOP: THE VISUAL ESSAY OF CLAIRVOYANT CRITICISM or READING AS CRITICISM or TIPPEX AS RADICAL GESTURE 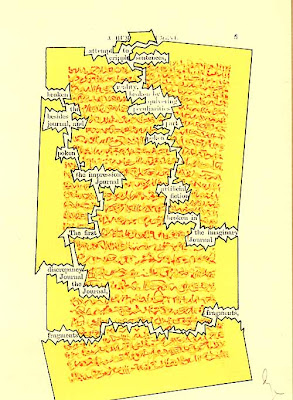 For a workshop as part of the Free Press project at Plan 9 in Bristol (7 Mar 2009), I wanted to present some models of essays where the visual form of the page was crucial both to the method of composing, the essays subject(s), and the distribution of ideas and experiences.

The phrase I began with was Clairvoyant Criticism.  This derived from Hannah Weiner, both her theories of word visioning, and also the way that became mediated through  the typewriter and also variations in font size, page layout, and structure that characterize many of her books. I read the following sentence from a recent anthology of her work, and it was only in reading it aloud - stumbling on its unexpected rhythms - that I realized the emotional intensity and danger of such a way of working:

When the words first began to appear in August 1972, they appeared singly. The first word, WRONG, appeared about an inch long, neatly printed at a 45 degree angle to my pant leg. Later words appeared in two word phrases some of which, as NO-ALONG, I did not understand...

In my naive (or natural form) desire for completion I would cry "where is my T - is it the phrase 'not alone' that is meant" and why cannot I or it or the spirits that I then sometimes thought it was, speak English.  The phrase developed but remained a phrase right up through the Clairvoyant Journal (1974, Angel Hair 1978). In April sometime I think I got down on my knees and begged or prayed, please let me see a complete sentence. On April 15th I did see one, printed in small letters along the edge of my kitchen table that had come to me from Lenny Neufield via Jerry Rothenberg. It said, "YOU WON'T BE ANY HAPPIER."

Having achieved this wonderful goal (my mind could spak English, after all, I could) I then proceeded to discontinue the sentence. The words appeared too fast and interrupted themselves. The (my) natural desire for closure was defeated by the more important mind - or poetic - form. I was happy though, complete thought.  (Hannah Weiner's Open House, 122-3) 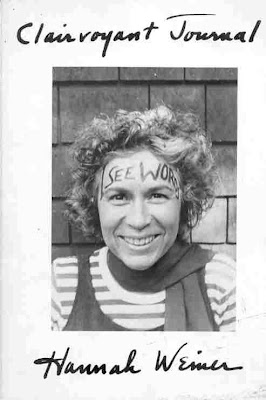 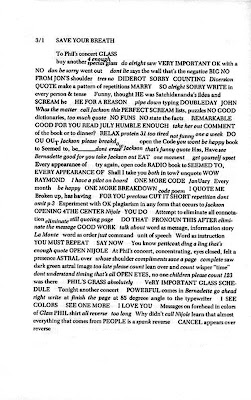 After this I wanted to consider some acts of writing that were also acts of reading. I contrasted the painted ornamentations of Tom Philips A Hummument with Ronald Johnson's removal of large amounts of Paradise Lost to create the minimal word count and ample white space of Rad I Os.

I also drew on Darkness (Chapter 1), a 2008 e-book by Yedda Morrison, which sat between Phillips and Johnson: altering the pages through the application of tipex, so the acts of erasure/ accretion had a definite gestural, physical quality. Morrison's text has neither the elaborate ornamenting of Philips nor the faith in white space of Johnson. Johnson's prefacing of her text as "re-animating the pre-colonial wilderness: a biocentric reading of Joseph Conrad's Heart of Darkness" also made such reading-writing appear a more consciously intentioned critical act.

Free Press was itself about considering the range of possibilities for a publication and how it could be distributed. This immediately suggested the Mel Bochner and Robert Smithson collaboration The Domain of the Great Bear (1966) - an art work inserted into an art magazine - and which, although reproduced in a diversity of publications since, remains inseparable from its original layout and design.

A show-and-tell through Bochner's Solar System & Rest Rooms: Writings and Interviews 1965-2007 offered a number of other examples: his use of grids as organising principle in Alfaville, Godard's Apocalypse (in Art Magazine, May 1968); agglomerations of found quotation in A Compilation for Robert Mangold; and works using notecards - Misunderstandings (A Theory of Photography) - rough, handwritten notes (Notes on Theory) and ring folders (Working Drawings and Other Visible Things on Paper Not Necessarily Mean to Be Viewed as Art, 1966). 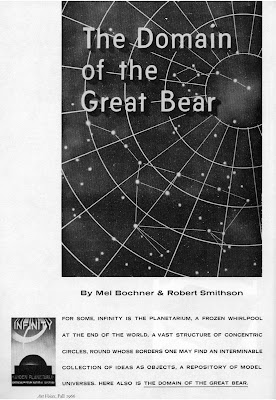 Viewing these different examples alongside one another also raises the question of the different contexts and status of each as an object - with the last three examples circulating as objects in exhibitions and collections. Solar Systems & Rest Rooms also highlights how Bochner's practice abandoned such experimental magazine-essay forms in the 1970's, with the rest of the book comprising more conventional interviews and talk transcripts.

Bochner's abandonment of this kind of visual-essay highlights the precariousness of this as a practice. This is evident, too, in how the principal source text of this  work is Richard Kostelanetz's near unavailable anthology Essaying Essays: Alternative Forms of Exposition (Out of London Press, 1975). This draws without discrimination on poetics, graphic art, diagrams, musical notation, notebooks, reading lists, and more familiar expository forms. As Kostelanetz summarises in his introduction:

Genuinely innovative essays are those that move decidedly beyond earlier kinds of essays - beyond not only the classical traditions of linear and/or aphoristic exposition but also beyond modernist essays with their emphasis upon personality and disjunctive structure. Innovative essays are those that confront not just dimensions of extrinsic reality but also the intrinsic, literary problem of how else essays might be written.

Since they tend to be based upon radically different structural and stylistic assumptions, they expose twice over not only their particular subjects but also the readers possible perception of printed communication. As essays depend upon organization, rather than fabrication, formal changes instill a re-essaying of a chosen subject; precisely because a different form reveals connections and perspectives that were not previously available, structural invention can change the essayist's thoughtful perception. (6)

In Bristol, the book was placed amongst the workshops resource area/ library. In the workshop itself there was only time to pick out a few of the more familiar examples of indications of broader tendencies: the diagrams of George Macunais; Ad Reinhardt's art trees; the poetics of Charles Olson; the notebooks becoming performance notations of Richard Foreman. 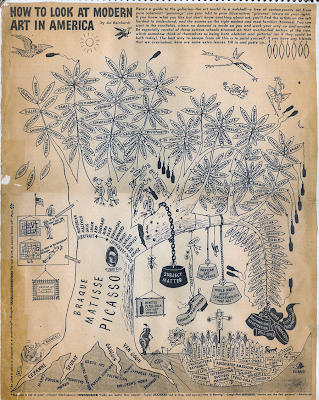 Ad Reinhardt, How To Look At Modern Art in America, 1946.

All of which may appear to have moved the workshop away from its original focus on clairvoyance, and of processes whereby text derived from sources beyond the artists conscious control. Nonetheless, in trying to consider forms of visual essay, and its resultant reconsideration of boundaries, a certain automatism seems helpful. These areas seem connected  in  the poetics with which Susan Hiller opens her own essay on Pollock and a surrealist- derived history of automatism:

Hidden: not always deliberately covered up but layered, occluded, obscured or shadowed - so this talk will be like a tangle of lines, like a drawing, circling round and round looking for its subject... An undercover meditation on loose connections, on uncovering and covering up, with myself as detective, tracking trajectories hidden in modernism, finding - and losing - traces of starting points and sources considered unacceptable and maybe unseemly... Returning again and again to certain personal obsessions. Writing over and over and over again. Doodling on a large scale. (The Provisional Texture of Reality, 71) 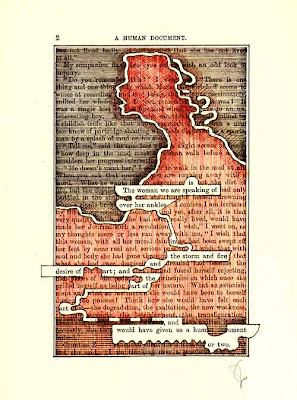 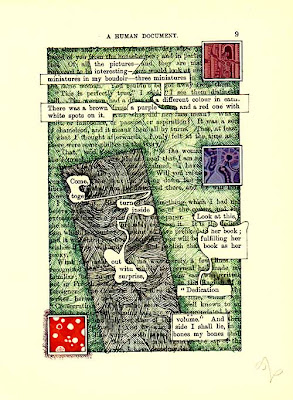 All of this material posed questions. What is at stake in writing, arranging, editing and discussing in a visual way? What is 'writing' in that situation? What is challenged and changed by the rearrangement of grammar?What happens to the reader and to the broader transmission of any ideas through such a shift? In an art writing still connected to other art works/ process and artists, how does this change the relationship? Are there boundaries of "common" or "public" language and what happens when meaning and grammar become more personalised or more non-personalised? Maybe that notion of language as "common" or "public" is what such essaying strategies explore.

For the workshop part of Clairvoyant Criticism we each responded to a single A4 page, informed by the sense of Weiner mediating her visions and ideas through the single sheet in her typewriter. Earlier we had brainstormed intentions and ideas about the Free Press project as a whole, writing lists on A3 paper and pinning them to the wall. Now each person had twenty minutes to create a visual field, elaborating on one of these phrases.

Responses included text, writing, and diagrams, as well as a paper shoe for imprinting the word "Free Press" on the ground through walking. For extra critical urgency and utility, one drawing was folded up into a paper airoplane.