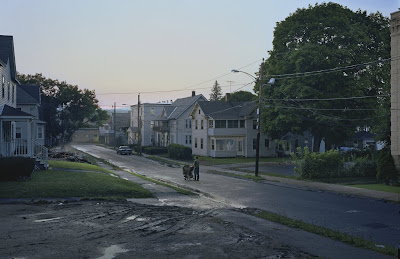 There is a moment when the arrangement of objects within a street form a narrative. But who, or what, in the street, a part of it, sees or knows? What position do we have to reach to make seeing or knowing possible?

Or maybe there are a hundred narratives, one for each of the multitude of sight lines. The camera, person or bird, suddenly assumes a position aligned with the particular stories they are susceptible to.

But I don't think so. Everything is staged. I saw the photo's that show this place being built, whole towns as if they were illusions.

Story? I'm equating story with suggestiveness, as if a combination of elements equates to character and motivation. By suggestiveness I mean something I recognise as meaningful. Or, perhaps, meaningless. The enigmatic that comes from an absence. But, again, I don't think so. It's suggestiveness is very constructed.

Why do I recognise such events as meaningful? Having noted a single detail, why does the whole street acquire form and composition, whilst the detail itself becomes excessive, unreal, and monstrous.

Could I explain this, even if you were listening, or here? There is a level of familiarity to such places connected to art history. This is like Edward Hopper, Walker Evans or David Lynch. It is this familiarity, this deep echoing, love, that enables the image to be seen, an emotional relationship to begin on the part of the viewer who is as far away from what is depicted in the image as you are from me now.

In my mind the ground for this image-street has been prepared by other images. This makes recognition possible as it threatens to kill it. It is the responsibility of the details - and, beyond their control, of the composition they make - to erase the references that bring them into being. Or, at least, having made them seeable to ensure them sublimated to experience.

And in the space that is left, examine your body, lay turf, suddenly a shaft of light, staring upwards. All of which induces a crisis of the skin. Both the skin of the person who appears in the street and the way that skin is the surface of the photograph

Normally there is a quality, close up, to the grain of the photograph that is reassuring as to the reality of what is seen. To come close to this surface, however, is to plunge into fiction. It is to approach a person and to experience the certain, nightmarish vertigo that actually they are painted. This is a space as the details form into narratives as the references are subsumed as the surface nightmares

the skin in crisis the space about which it is only possible to say: EMOTIONS ESCAPE WORDS and ENVIRONMENT ESCAPES EMOTION. That's what happens when you build everything for yourself. Nobody rests here. No one stands thoughtfully in a doorway. That river is not blue but you could swim in it 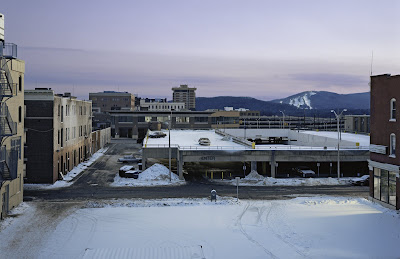 in Ameria and anonymity both. Never trading in monuments, in symbols of itself, in iconography. Not unless such things are trading on the level of the smallest phenomenological impulses a place prior to definition that nonetheless has a convenient catch all name.

Instead of the news there is a way of sitting naked in a chair where there is a suspension between your own self-awareness and that of the chair, through which at that moment your identity must be constructed.

The people in these photographs are without breath, mostly still, and they have learned to express their needs through the whole, however that is conceived, secret even to themselves

Because needs are the stuff of narratives and unperceivable wholes, streets, and lots of small jobs to do around the house but of which the house disaproves. This a film set, remember. Through each door and window - that's where those old, killed off representations are hiding.

Not hiding, telling what they saw.