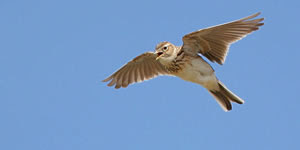 His first work made for cinema exhibition rather than the gallery space, Mark Wallinger's The Lark Ascending (2004) was the concluding event of this weekends Sonic Illuminations event at BFI Southbank. A grey screen was accompanied by deep, murky, reverberating tones. Over the films 34 minutes the screen lightens to white, and the sounds gradually rise in pitch, both prompting a changing mass of associations and projections. Only in the last few minutes does the sound shift from electroacoustic composition to become identifiable as skylark song. Then the song stops, leaving the white screen in silence.

The Lark Ascending has many art historical resonances, from the black squares and white paintings of Malevich and Rauschenberg, to the experiments in duration of Warhol and Michael Snow. Although the change from grey to white is a gradual trajectory, programmed to be indiscernible from moment to moment, the swirl and shifting of the video field also evoked the flicker films of, for example, Tony Conrad. What links all of these references is an attention to the instability and variation of visual fields, and their perception. In this instance, the movement from black to white changes the degree to which the screen appears to be moving out or in, whilst the mere act of looking at the screen prompts a range of visual effects. As Wallinger himself observed in the post-screening discussion, the act of making the piece for cinema rather than the gallery positions the audience in a darkness and frontality where these attributes are most fully experienced in a state of intimate yet collective privacy.

If the screen evokes an experimental film history ever attentive to the materiality of its own medium, then sound is able to intervene in that formality in a way that is much more playful. Sometimes, given the pieces title, I thought I was listening to a re-working of Vaughan Williams orchestral romance, a mutating and warping of a piece long become a Classic FM staple, an attempt through manipulation to redeem it from the added nostalgia in which it has become swathed. More comically, Wallinger confirmed an audience perception that early on it also sounds like The Clangers. If the film seems to be exploring a materiality and distortion, a world mediated by electrionics and the media, then the end is counter to this, where the manipulated sound gives way to an ecstacy of bird song experienced both as a rupture into and an evolution out of the sounds and images that have preceded it.

One of the curiosities of the sound track is precisely what leads the listener to categorise a sound in a particular way. Wallinger's complex intertwining of natural and artificial emerged beautifully in the discussion when the artist was asked how he had managed to get such a pure recording of a skylark free of aircraft noise, and replied he had bought it from HMV.

The discussion also revealed how formal plays of black and white, image and sound, resonated with aspects of the films content: the pastoral as evidenced in the music of Vaughan Williams and the poetry of George Meredith; in the contrasting styles and associations of folk and classical music; between progressive and regressive notions of “Englishness”; and, most poignantly, in the bloodshed, war and social change between Williams’ completion of the piece in 1914 and its 1920 premiere. Such concerns are both absent and present in the piece through its emotional shifts, tones and textures, further informants of a space in which Wallinger combines emotion, narrative, and humour alongside and through a more austere focus on idea and concept.

For Wallinger, such a mix of concerns seems to depend for its transmission on the tighter controls of the cinema when contrasted to the gallery: the emphasis on darkness, on start and finishing times, and what Wallinger termed the “peer pressure” to stay for the duration. Expanding his sense of cinema, Wallinger talked of it as a “found object” where one could be more “self-conscious” than in a gallery, “transported… taken away” in front of the enormous presence of the screen which is “not quite a window… not quite a screen… can’t see through it…can’t look at it...”
Posted by MORE MILK YVETTE at 11:58