MANUFACTURED LANDSCAPES: ON BURTYNSKY AND HUTTON 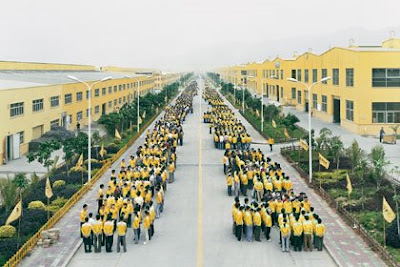 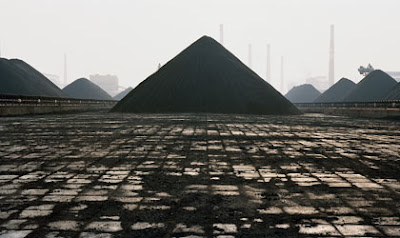 I was sad to the miss the Q&A with Edward Burtynsky that accompanied the May screening of Manufactured Landscapes at the BFI Southbank. Actually, after seeing the film I was less sad because one of the film's structural devices is to keep returning to a Burtynsky lecture, as if the whole film is an advanced power point presentation: showing his still photographs and then animating them, before going behind the scenes to show Burtynsky and his assistant at work.

That simplifies the film a bit, but not much. The other structure comes from that of Burtynsky's career - his spectacular images of polluted landscapes preceding a series of visits to China. There's a strong thread between these two bodies of work, although China is not presented as the origin of this pollution, rather as the place where it ends up - Burtynsky shows whole towns dedicated to separating the heavy metals out of old computors, for example. China is also what Burtynsky's work demands: the place of greatest drama in which the processes of production, the processing of raw materials, is enacted on the largest possible scale.

Actually, now I've written this, I'm wondering if i didn't learn something from this film after all. Something, say, about China and e-waste. Maybe I should ditch the churlish comments I've planned about eco-porn; about the films total uncritical absorption into Burntsky's way of seeing; about the whole unproblematised image of the artist as a kind of neo-coloniser, with his huge camera, his intrusive presence, his assistants, and his demeaning way of placating the natives wth sweets, drugs, money and polaroids of themselves (I wasn't sure what was going on, but Burtynsky's assistant was handing out something) . 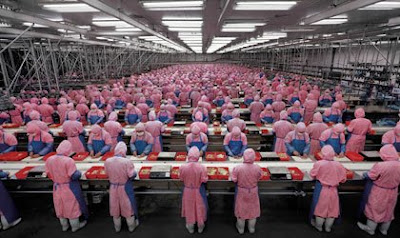 Maybe I could quote Burtynsky's lecture here in his self-defence, but the only thing I can remember him saying is that he doesn't have text in his exhibitions, or frame them as specifically political exhibitions, because he wants to leave the interpretation open. It's a familiar argument and I'm wondering exactly what sort of interpretations are possible. Actually, I think Burtynsky makes it remarkably simple. Without context, this is aesthetic, glossy "ooh" and "aah" art, as if Andy Goldsworthy had given up using his spit to stick icicles together and was set on making another of those big, glossy books by trashing the planet, or by changing from leaves to Chinese factory workers (see the first picture above).

Perhaps my disquiet can be expressed through Burtynsky's statement Exploring the Residual Landscape:

Nature transformed through industry is a predominant theme in my work. I set course to intersect with a contemporary view of the great ages of man; from stone, to minerals, oil, transportation, silicon, and so on. To make these ideas visible I search for subjects that are rich in detail and scale yet open in their meaning. Recycling yards, mine tailings, quarries and refineries are all places that are outside of our normal experience, yet we partake of their output on a daily basis.


These images are meant as metaphors to the dilemma of our modern existence; they search for a dialogue between attraction and repulsion, seduction and fear. We are drawn by desire - a chance at good living, yet we are consciously or unconsciously aware that the world is suffering for our success. Our dependence on nature to provide the materials for our consumption and our concern for the health of our planet sets us into an uneasy contradiction. For me, these images function as reflecting pools of our times. 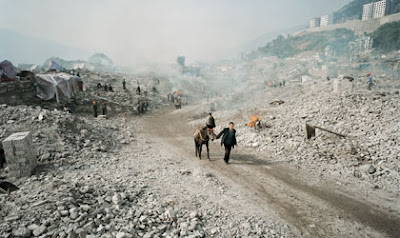 I certainly felt like I was suffering for his success. It's with the movement, evident in this statement, towards the mythical, that I think my disquiet begins. At a very early point in the film, each image just made me worry more and more about beauty. I like beauty, so I'm puzzled why it so irritates me here. One clue is in the images of tanker ships being dismantled in Bangladesh. This reminds me of a simialr scene as it appears in Peter Hutton's film At Sea. Hutton's films, too, are beautiful, but not at all troubling, and I'm wondering what the difference is. It's not time: both Hutton's film and Burtynskys photographs have slow, contemplative rhythms.

P.Adams Sitney has a thoughtful, perceptive article on Hutton in the May 2008 Artforum, tying in with a retrospective at MOMA. Sitney writes:


For nearly four decades Peter Hutton has been taking the meaure of the cinematic image to delimit its powers of fascination and absorption. Over those years he transformed a diaristic mode of the filmic lyric into one in which subtle fluctuations in the visible field - of light, or figures and objects in motion, or slight camera movements - configure the ecstatic concentration of the filmmaker's attention. He marshalls silence and the immanent rhythms of nearly still scenes, or slow vehicular movements, to evoke the pleasures of isolation, even of loneliness. If that sounds paradoxical, it is consistent with the oxymoron or catachresis in the title he gave his third film: Images of Asian Music (A Diary from Life 1973-74). Within individual shots music, or vibratory energy, becomes soundlessly pictorial: A centripetal force repeatedly concentrates the intensity of scrutiny in prolonged, suspended moments that nearly efface the subjectivity of the observer opnly to have it resurface in the paratactic assembly of apparently isolated shots. The persona of the filmmaker looming within Hutton's work seems to go looking for loneliness, all over the world, in fact, as iof convinced that beauty reveals itself most poignantly within the modalities of attention. This would put him at the opposite pole of Jonas Mekas, the great film diarist who can never shake off the painful fissions of isolation despite the hectic whirl of social and familial life he records. In opposition to Hutton, he continually goes questing with his camera for what he calls "the ecstasy of old and new friends." (361-62)


Thinking about how this differs from Burtynsky: it's a more allusive quality: something about whether the image tries to condense everything about its subject within its frame, or whether its composition is forever opening out, assuming however implicitly an off-screen space that is the complexity, wonder, stupidity and barbarity of the world alike. Buyrtynsky's images are forever reaching for the iconographic which is also closure, and that was how his working method seemed too. Hutton's largely silent, peopleless At Sea ends with an eruption of people on the beaches where the tanker ships are dismantled, and where his own camera is surrounded, joked with, absorbed into the remarkable scene, as if the films formal clarity was a fleeting, tentative affirmation or proposition. Hutton's interest in something may have an aesthetic basis, but his method is mobile and patient enough to allow the scene its own growth and development. 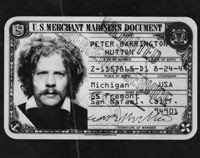 Sadly, At Sea - which I saw at last year's London Film Festival - is unlikely to get a cinema release to enable this hunch to be checked further. I was walking home, wondering if I had any books with articles or interviews with Hutton, when someone gave me a copy of The London Paper, the free newspaper given out on the street here. Opening it I read:

Supermodel Petra Nemcova seemed determined to cause a stir at the weekend. Not content to simply dazzle in a fabulous outfit, the Czech beuaty turned heads at her Creative Coalition fundraiser by cosying up with ex Sean Penn and wearing a Montblanc diamond ring on her finger.

I wondered if my argument with Burtynsky was about reverence, and that what I objected to was his double move: landscape as celebrity on the one hand, image as classroom on the other. It wasn't particularly about his images, which get a curious frision from turning devastated landscapes into luxury commodity, but I did have a sudden desire to shout out: "Images don't need text to be closed and determining, pompous and self-important. They can do it all on their own!"
Posted by MORE MILK YVETTE at 15:37