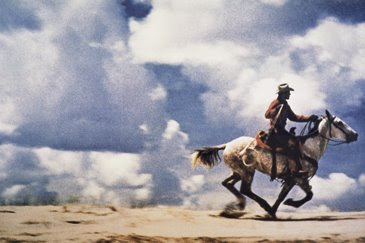 
Pulp novels and B films, bike culture, the open road, the Marlborough cowboy, the fast talking Jewish comedian. They're all in there together, in the small, linked spaces of the Serpentine Gallery. What did I expect from this new Richard Prince show? I thought it might be fast and sharp, trickster like with its arrays of appropriated images. I wondered if it would seem affirmative of the culture it figured, or whether its manipulation would emphasise a hollowness. Maybe both. I was sure it would be very American. Or, rather, it would be about the culture through which we can all be American, even Americans.

Actually, the show's dominant mood is one of quiet intensity. It is a peaceful, contented show. Maybe this is because there is a certain retrospective feel - not just in terms of being a mini-retrospective of the artist's career, but also because the images themselves, the sense of culture and the method of approach they embody, all seem to have formed their sense of themselves around 1982. When a series of images mimic the style of William De Kooning's Woman, by mixing his abstract expressionist brush work with torn pieces of pornographic photographs, it's as much about a certain dialogue and challenge between generations of New York artists as it is a critique or dialogue with De Kooning's - and the media's - representation of women.

This isn't a show about globalisation, or the image glut of the internet. This isn't the new cities of China, or even the modern day post-9/11 New York. This is a show that has a different focus, showing an earlier age of media imagery in its aftermath, the point where it has settled, sunk into a psyche, forming a sediment where it has certain habitual quality. It's just the way things are, in the same way as the jokes in Richard Prince's joke paintings - they're the way jokes used to be, when a joke was a joke that began " A man walks into a pub...." 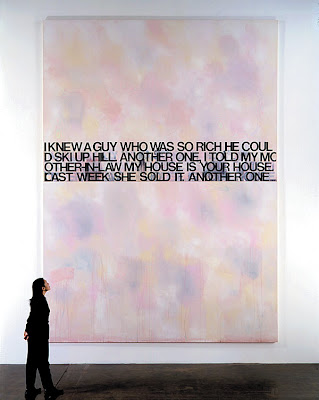 This exhibition even seems - and I'm not sure what this means - rural. Maybe I'm swayed by the gallery text which talks of Prince at home in upstate New York, arranging his art works in his collection of houses. Actually, I'm mainly swayed by his Upstate series itself, which indulges a fantasy of rurality and ease and community and landscape, even as it highlights its economic and spiritual redundancy - a basketball hoop in a grown over field, tired marks on a deserted country road speaking of a kind of hopelessness. Prince as Walker Evans? Thankfully the Marlborough Cowboy is always just a short gallop away. You can probably see him, right now, on the horizon... 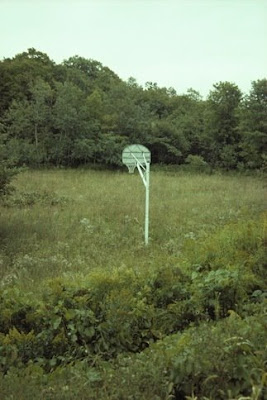 If the notion of his ouevre as rural is puzzling, what does it mean to think of Prince's output as principally domestic? Maybe collage art has a homely side if one thinks of Cornell, or the importance of "household" in the work of Jess and his poet partner Robert Duncan, or even Richard Hamilton's Just What Is It That Makes Today's Homes So Different, So Appealing (1956). Somehow, though, when that becomes appropriation in artists like Prince, it seems far more about the home being replaced by a public, mediatized culture. But that was then. Now we're invited to see Prince almost as a kind of part-time, upper New York state car mechanic, tinkering rather than art making, albeit one who is a millionaire and hires a private jet to fly his hobby over to Hyde Park.

I liked this show. I liked the way its mood seemed against what its materials made it seem that it should be. It meant that the artist was elusive, rumours and lies. And there was shock too when I said to myself "This isn't retrospective. This is contemporary." Then I saw the consequence of what this show chronicled: pop become psyche. There were looping bad jokes as political structures, bare breasted biker girls reading the news, and men forever stuck in the mindset of a fifteen year old, but getting ever fatter. All of them were trying to make sense of a world they never expected, brought to them through images they didn't recognise from their dreams.
Posted by MORE MILK YVETTE at 16:08