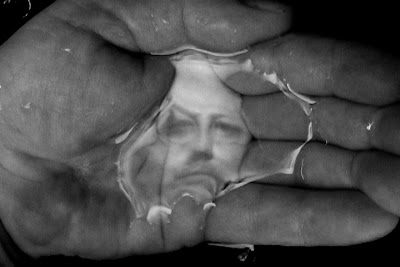 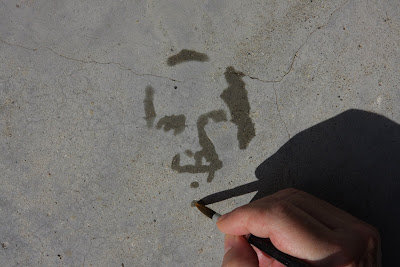 A piece in the recent show at the Photographer’s Gallery was my introduction to the work of Oscar Munoz. Over twenty eight minutes the video Re/trato documented Munoz painting a self portrait in water on a hot pavement In Cali, Columbia. As one part of the face was worked on, so another vanished through evaporation. The piece was a powerful dialogue about presence and non-presence, between mark making and recognition. Furthermore, confronted by the image without any explanation, what was happening was both more mysterious and more inevitable. Abstracted by the video from its context the screen shows a hand holding a brush, a grey ground, a bowl of water, and a portrait that magically appears and fades.

The piece takes a different form in Mirror Image, Munoz’s first solo UK show. This time it involves five screens, a shift away from self-portraiture into a range of male and female faces, the act of painting confined to one screen as images evaporate on another. Having seen the single screen work, this seemed less concentrated. The rhythm between the screens was also awkward and stilted – the image freezing on a screen worked towards a full portrait, the hand commencing work on a screen where previous marks had evaporated away completely. The piece was now entitled Proyecto para un memorial (Project for a Memorial) (2005), and suggested memorial as an ongoing commitement to a process of appearance and disappearance in a very literal sense.

Other works in the show compensated for this necessary lack of focussed intensity. Munoz has blocked out the windows of INIVA, making seven small holes, each the lens for a camera obscura. Upside down images of Rivington Place were projected onto circular concave mirrors attached to the gallery wall. Mirrors are arranged at varying angles so that, creating patterns of dark and light, the seven appear like the stages of a lunar eclipse. As it evokes this cosmic scale, so, too, the work, makes physical demands on the viewer who must move close in to and peer around the screens to make out any detail from the projected images. The scale and positioning of this work means that a normal, gallery viewing distance is not acceptable. Similarly, the pieces disrupt normal relations out on the street where the normal window display is replaced by boards and a series of small holes which promise much but reward curiosity only with the realisation that you must come inside the gallery to satisfy your curiosity. 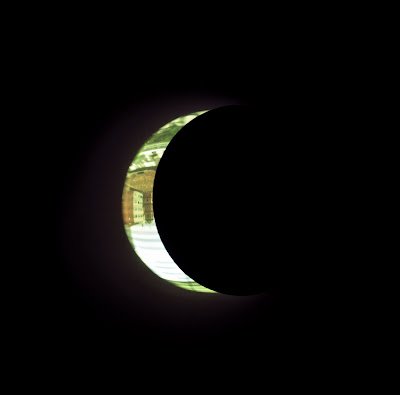 During an artist's talk at INIVA, a Colombian artist in the audience praised Munoz for the openness of his works, and how they had enabled work by younger generations of Colombian artists. Certainly one of the pleasures of this exhibition was how in each piece Munoz found an image and a process which both functioned as an expression of a particular place and society, and was also open to being read as attempts to articulate a ground zero of perception and experience. Munoz own comments at the talk had similarly stressed creating work that in its openness could appear in contexts both local - the artist runs an arts centre in the Colombian city of Cali - and more global. Talking through a translator, Munoz described the nature of images as being something like this:


There is a continual flow of images or events one after the other.

The question becomes how to memorise or maintain such images when there is always the threat of new images taking their place and obliterating them.

This produces a concern with the fragility of mind and memory


Linea del destino (Line of Destiny) (2006) documents a hand full of water in which Munoz’s own image appears. The water slowly trickles away between his fingers, again instigating a process whereby the always uncertain image is rendered invisible by the loss of a surface on which its projection can be read: a water that evokes the chemicals of the photographic darkroom. Curiously, this piece also seemed crafted to highlight the surreal aspects of Munoz’s work. Black shadows between the fingers and on the hand seemed to evoke the ants that crawl out of another closely examined hand, that of Bunuel and Dali’s Un Chien Andalou. The end of the video, too, lingers on a hand made strange and suggestive, sexual and fetishistic, and which, in its status as failed water vessel, slowly fades to purple. Here Munoz hovers on the edge of psycholanalysis and, particularly, the symptoms of trauma that presence can constitute.

Two other works complete a show invigorating in its mix of rigour, deftness, substance and imagination. In Narcisso (Narcissus) (2001-02) an image has been drawn on the water surface, its clear black image also producing a shadow on the white porcelain of the sink. For a moment, as the water slowly drains away, the fainter portrait appears to be aligning with its bolder twin, but, as the process continues, the features of the drawing begin to twist and, in a rapid denouement, are reduced to ink stains on the empty sink as the last of the water disappears down the plughole. The process is again complicated by the uncertainty, when looking at the image without accompanying explanations, of what is going on. The draining away of the water is only really visible via the effect it has on the drawn faces. This takes further the emphasis on medium because here the image is not a projection but an actual part of the medium or screen. Again, video is employed to document but also to set up a particular level of distancing possessed of new perceptual conditions. 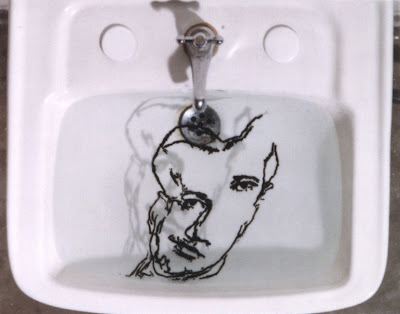 I read the works upstairs as a kind of meta-commentary on this sequence of videos. In Pastiemp (2007) samples of pages from the El Pais and El Tempo newspapers are laid out on tables. These are prints of newspapers revealing the dots of which newsprint is comprised, which Munoz then pierced with a hot needle, so that the heavy pixellation of which newsprint is comprised also becomes a series of holes and burns. The needle went through the paper creating different effects and intensities and Munoz has arranged these sheets to highlight the range of effects, as well as exploring and deconstructing the newspaper form. In his display, a double fold inside a broad sheet for example, can comprise two reproductions of a title page, one heavily altered and needled, the other much lighter in tone, as if, like photographs, pages of newspapers exist in positive and negative prints.

At busy times, examining these sheets was interrupted by the sounds of heavy breathing. Aliento (Breath) (1996-2002) comprises seven small circular mirrors attached to the wall. Breathing onto them reveals a photographic image of a person taken from the newspapers. The image appeared briefly, fading alongside and amidst the pattern of one’s own breath on the screen. It was a powerful process, again making physical demands on the viewer and one that, deliberately or not, was awkward and incomplete – one had to breath hard into the centre to make the image appear and it was never an easily consumable image. Rumour abounded amongst the visitors and the gallery attendent that these were photo’s of "the disappeared" from newspapers, but, like many of the works here, such cultural and political specificity seemed comfortable to take its place amongst a broader range of aesthetic and physical possibilities.