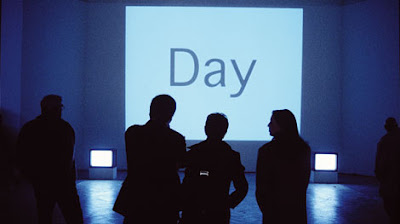 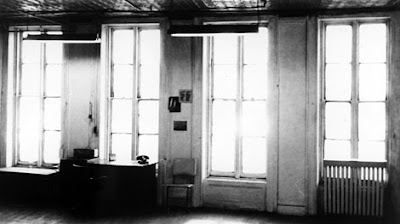 
These notes and drawings were made after attending several screenings and conversations with Michael Snow at the BFI Southbank, inparticular the screening of Snow's La Region Central (1971) on Fri 5th December and its subsequent discussion.  The events coincided with the opening of Yes Snow Show, until Feb 9th  in the BFI Gallery.

The drawings were made quickly and in one-take, although certain aspects preoccupied me: a desire to draw a score for Wavelength (1967), the presence of the single frame, and (in La Region Central again) the machine holding the camera, designed never to be seen but whose mysterious moving shadow appears several times in the film's 180 minutes.

Drawings and notes were left-overs from these sessions, what lingered in the mind, hopefully to be unfolded by further screenings and discussions in January. In what follows Snow's comments look like this and mine are in italics.

Duration in La Region Central is the equivalent of mass in sculpture.

[The image of an X that prefaces each section of LRC] is as much a statement of fixity as possible, in contrast to the film's motion. It is a kind of title.

What materials do I have... To have a strength that is not just a documentary strength.

In 1971 with Brakhage and Mekas the emphasis was on the autobiographical. I was more of a sculptor than a storyteller... avoiding depicting myself... a camera is a machine...

No one had made a landscape film before....

...with Cezanne there is a perception of what he has reported on in the painting but what he reports is the painting... 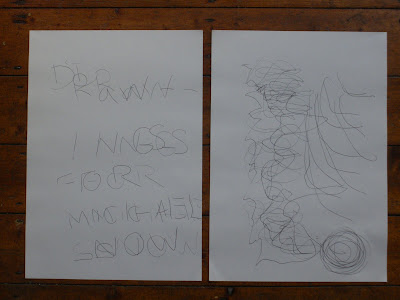 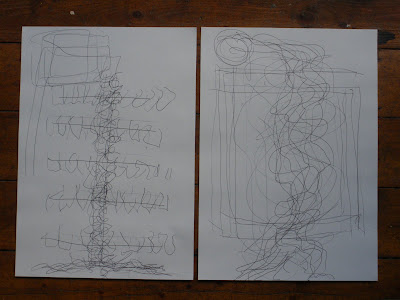 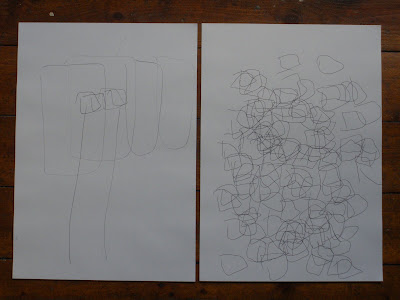 Have I remembered this quote quite right? I'm not sure. Maybe it was confused as Snow said it, testifying to the unclear boundary between "reported on" and "what he reports."

Snow made a similar point about La Region Central - that it was about a landscape but ultimately it was a film. This distinction explained a lot of his methods. For example, the distance of the camera to the shelf in  A Casing Shelved (1970),  being the exact point where distance prioritises the event as a film.

Maybe a series of drawings could delineate the exact moment of this shift into as film. What is the smallest gesture one can make and make this shift.... by what means could it be enacted. It's a very precise zone, dependent on proximity as well as distance: move too far away from the shelf and you also leave it behind.

with music and painting I had a "wow" reaction and wanted to do things like that myself... I never had that reaction with film.... what it is as a technology...

In Side Seat Paintings Slides Sound Film  you can't judgmentally see the paintings, so you have to see the film. The paintings are used to make a movie.

The diversity of Snow's productivity across a time span of five decades and a genre-span of film, sculpture, writing,  painting, and music. Snow explained how sometimes he felt he should concentrate on one medium but then accepted that diversity was what he did.

Actually, several questions asked Snow to see the threads between his work, over the genres and over the years, for example in the terms of Rosalind Krauss' thoughts on medium-specificity. Was there some other-than-medium residue that linked Snow's output?

Snow didn't know what to say, and said "me."

In Wavelength I wanted to make a shape in the spectators mind - of the zoom or the projection beam. I thought I would always be present when it was shown, and would play the soundtrack live each time, on quarter inch tape...

I will not accept their work as residing within the particular frame they offer or refuse to offer. 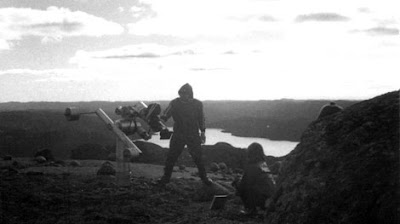 His career as a jazz musician, from improvisation based around themes to a free jazz abandonment of any set pattern. Maybe Wavelength or La Region Central would be usefully thought of as acts of intuition and spontaneity with and without pre-arranged themes.

Or maybe it's best to keep different areas separate, or not in the kind of conversation where each conveniently explains or refuses the others. For example:

The machine of La Region Central exists as a sculpture. 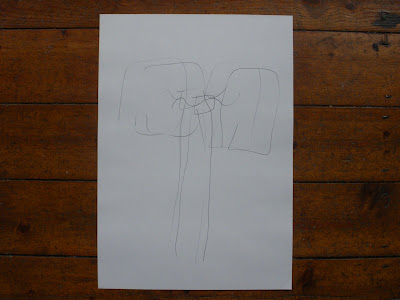 I became interested [in A Casing Shelved] in something in the studio that is next to art... a found thing.. .relates to art... more of a static thing... voice suggesting you look here and look here... wanted to make a pattern for eyes through the voice but it became more random...

Q:So the voice is a camera?

Snow talked of how early on he had made lots of works involving a five foot tall, cut out walking woman. He was interested in how it was a stencil so it was repeatable, anything could be painted on it, and the cut out could be placed anywhere.

What films have you enjoyed watching in the last ten years?

This is embarrassing. I don't really watch anything... apart from my own stuff.

Writing up my notes, thinking through these issues, drawing with my other hand, I read Dick Higgins essay On Doing Too Much - a short think-piece about his own work across theatre, music, painting, poetry and other forms. Higgins talks of a kind of artist "whose joy seems to include the making of an environment for himself." (105) Higgins isn't talking literally about some 1960's Jorge Pardo. He goes on to talk in metaphors of houses and rooms constructed by different media.

Together with  Snow's exclusion of all work but his own (at least recently), it suggests his multi-media activity as a way of constructing his own cultural house or environment. As Higgins concludes:

... for me to do work that had powerful affinities with Natura naturans, I had to accept that I needed many kinds of space to move in in order to function as a whole, and that it turned out not to be such a bad thing. My right hand affirms my left: remove either, and I might bleed to death. (A Dialectic of Centuries, 109).