WORD EVENT: BEING A TRIBUTE TO GEORGE BRECHT WITH THANKS AND SUGGESTIONS AS TO HIS UNLEGACY 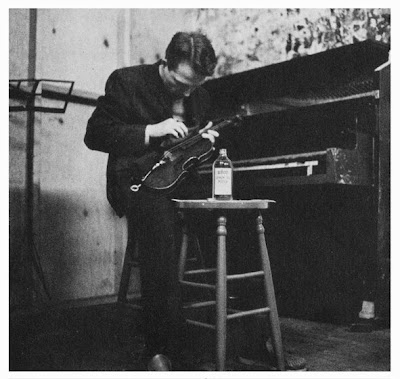 Through Ron Silliman's blog I learned today that George Brecht has died. Brecht  probably remains best known for his event scores, such as Motor Vehicle Sundown (Event) (1960), Three Chair Events (1961) and Drip Music (Drip Event) (1059-62), along with the mesmerising photo's (see above) of his own performances of these scores.  I'd long been fascinated by his work, the little I could see of it, and relished the full view given by the catalogue for his 2006 MACBA "Heterospective."
Below is a reproduction of a double sided sheet, 32.2 x 24.8cm, edited by Brecht in 1963, with contributions from Brecht himself, Dieter Rot, Robert Morris, Claes Oldenburg, Ruth Krauss, Heinz Gappmayr, Angus MacLise and Jackson MacLow: 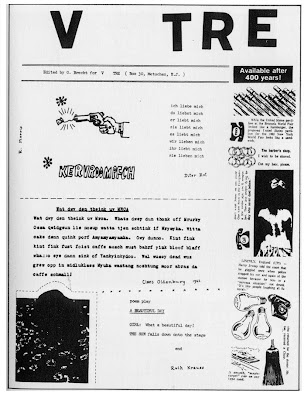 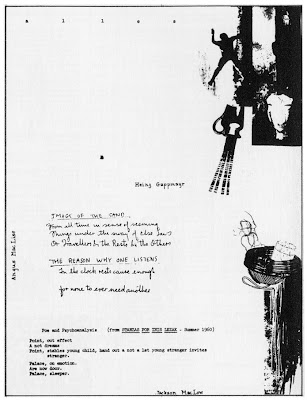 I include it here in homage to Brecht, and also as a way to begin to articulate about how his work might feed into a project like More Milk Yvette, or any other genre- restless (art) writing project. His work was one of those I have come to realise feeds through many of the ways  I think about writing, art, criticism, furniture, drips, and musical instruments. Why is this?
Two-ish reasons to start:
The economy and dexterous thought embodied in his scores; the attitude and philosophy that underlies them AND how this is so powerfully conveyed by the black and white photographs that document them.
Also, the subtle negotiation the scores enact and instigate between everyday life and all sorts of avant-garde movements in painting, film, performance, and writing.
I thought of compiling a whole gallery of images of Brecht's scores, performances and other works, but many are readily available on the web and I'd like this space to be one for Brecht's legacy, to be one small gathering of ideas that wouldn't exist without his example.
At the BFI Southbank this weekend, Bruce Jenkins was screening films from the Flux Film anthology and talking about the remarkable legacy of fluxus events - such as the 1965 screening of Nam June Paik's Zen for Film - which have somehow developed from poorly attended screenings in lofts, bars and basements in 1965 to have a continued, troubling, and exciting cultural presence today.
I'm currently writing an essay about fluxus scores generally, and about what they mean for any sort of expanded writing practice. Brecht's work is one of the key sources for this thinking: both for the language itself, and the distinctive physical forms it obtained: 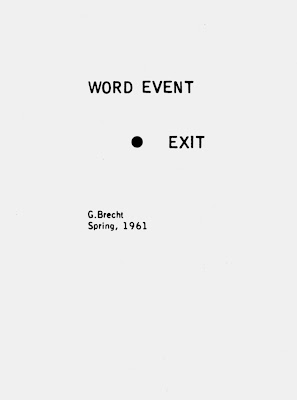 Perhaps reproducing here some of the questions I've been asking is one way of noting the presence Brecht continues to have:
Is their a rough taxonomy of the written in Fluxus? What would its categories be? Handwritten? Typed? Collage? Compare Brecht's Scores and his notebooks. If there was a diagram of Fluxus writing like Macunias' Expanded Arts Diagram, what would it emerge out of and link to?
How important is the visual layout, font, and type size  to meaning, reading and performance? How does the score relate to, say, the history of the scrawl - including work by Artaud, Twombly, Spero, Michaux, Roth - as contrasted with the more rigorous design and geometry of much concrete poetry? Some fluxus scores, for example, exist both as handwritten scrawl, and as carefully designed flux-cards, pamphlets, and/or mail art.
In a world view like that of Fluxus which is so connected to the experiential, how does writing fit more broadly? Does it bring a freedom or a discipline? Where is the boundary between suggestiveness and constraint?
What changes - for each stage of writing, reading, performing - between the short scores like Brecht's and the longer lists of instructions in, say, Benjamin Patterson's Variations for Double Bass? Is the positioning of scores as music part of an anti-writing/literature perspective? Is the anti- in that sentence to do with writing itself or writing as certain institutions and definitions of 'writer'?
Are there examples of written interpretations/ performances as a response to scores? What is the written response to Alison Knowles Proposition (1962), with its invocation to "Make A Salad." ? Is writing itself (and reading) to be considered a performance?
How do the scores as writing relate to existent literary forms? Is it useful to think of the score as a novel, a short story, play, poem, an exquisite corpse? Is the fluxus engagement with language best understood - literally and metaphorically - on the level of book, word, syllable, letter, glyph?
Compare Brecht's Scores, his notebooks, Dick Higgins' diagram of Intermedia, George Macunias' Learning Diagrams, and the sprawling family tree of Ad Reinhardt's How to Look at Modern Art in America.
Did a score ever become self-satisfied with itself, and no more? Would this be a rejection of performance or a somewhat cannibalistic incorporation into itself of any potential performance?
And to write scores now? 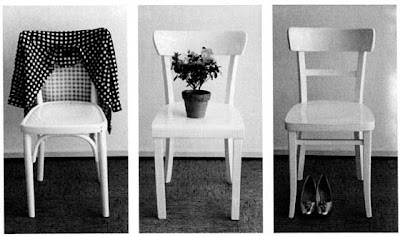 George Brecht, Chair Event, 1966.
Thinking about this role of fluxus writing, moving beyond Brecht, Lette Lou Eisenhauer suggests in the recent catalogue Fluxus Scores and Instructions that:
Artists who were chaotic in their work (Hansen, Kaprow, Higgins, Vostell) and/or whose lives were not acceptable did not last long as part of Fluxus... Filliou and Emmett Williams were exceptions to the rule and that may have been because their work was primarily written only, or done in small private spaces such as the inside of Filliou's hat, or Emmett's tiny Rue Mouffetard hotel room in Paris.  (34)
Remembering Brecht's work I'm fascinated by the contradictions and diverse mental positions that come from responding to the world in  a score-informed way, its mix at all times of  (not-) writing, (not-)reading, and (not-)performing.
Perhaps the best starting point for articulating some characteristics of this stance is Brecht's own remarks at the conclusion of his short 1964 essay Something About Fluxus:
Whether you think that concert halls, theaters, and art galleries are the natural places to present music, performances, and objects, or find these places mummifying, preferring streets, homes, and railways stations, or do not find it useful to distinguish between these two aspects of the world theater, there is someone associated with fluxus who agrees with you. Artist, anti-artists, non-artists, anartists, the politically committed and the apolitical, poets of non-poetry, non-dancers dancing, doers, undoers, and non-doers, Fluxus encompasses opposites. Consider opposing it, supporting it, ignoring it, changing your mind.
Posted by MORE MILK YVETTE at 05:58