THE BOAT UNIVERSITY: WHERE THE FUTURE IS AN ARTISTS' NEWSPAPER 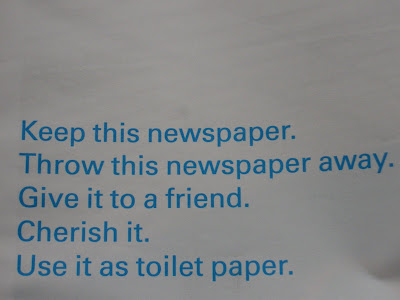 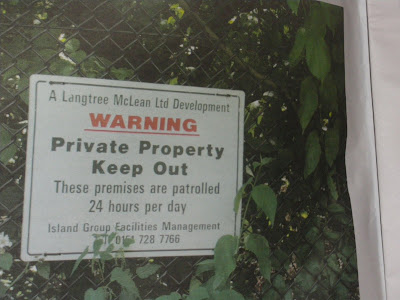 The following text was first published as my contribution to Future Visions of History, an artists' newspaper curated by Penny Whitehead and Daniel Simpkins, commissioned by Open Eye Projects, and selected by Rebecca Lennon. As Daniel Simpkins explains:

On the Long Night of the Liverpool Biennial a group of artists and art students assisted me in gate-crashing the Capital of Culture party, disseminating alternative view points to the hegemonic art and literature so profuse on the streets of the city throughout Liverpool08. This one-off, free publication explores some of the issues, themes and locations that do not feature in the official 2008 programme. The hidden, the neglected, the absurd, the contentious.

In 1984 Liverpool was host to the UK's first International Garden Festival, a pioneering and aspirational investment into leisure, internationalism, culture and tourism for the purpose of social and economic regeneration. Despite attracting more than 3 million visitors, the festival has had little sustained impact on the deprivation of its locality. The festival site, which was intended to endure as a functioning public space was sold to private developers and over the past twenty years has declined into dereliction, generating on-going debate about its future.

In 2008, as the hopes for the future of Liverpool, like many cities internationally, rest once again on culturally driven regeneration, the overgrown and forgotten Festival Gardens - privatised, derelict and fiercely guarded by 24 hour security - provide an alternative perspective from which to explore elements of the current discourse surrounding culture, capitalism and regeneration. 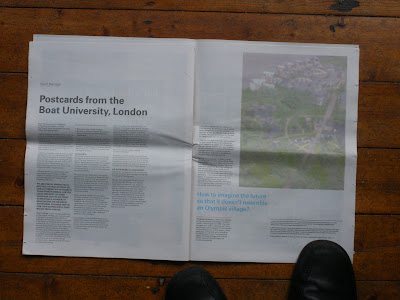 from FIRST LECTURE ON LIVERPOOL, OF THE BOAT UNIVERSITY, LONDON.

... With the Mclean's photo in hand, welcome to the Boat University, convening as usual in a rowing boat in the Round Pond, Kensington Gardens, London, to discuss the issue of the International Garden Festival site in Liverpool. Notice the shoals of property developers swimming alongside the boat, eager to hear every word of our imaginatively rich and theory-laden discussion... 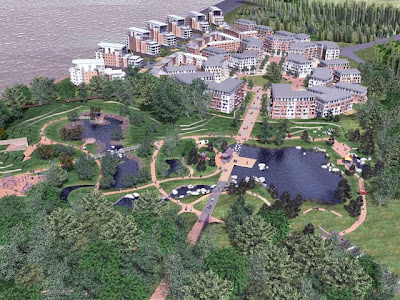 ... and how this photo reminds us of our own key question: how to imagine the future so that it doesn't resemble an Olympic village? We have much to talk of concerning the start of the football season, but now is the time to focus our minds. Symbolically apt or not, there is a burning hot sun and we are adrift without sun lotion or bottled water...

... To avoid some misunderstandings that have recently arisen in regard to other projects of the Boat University we have provided everyone with copies of the following statement:

WE ARE DEEPLY IMPRACTICAL BUT FULL OF IMAGINATION, SO OUR CONTRIBUTION IS UNLIKELY TO PROVIDE MATERIAL FOR THE LEGAL SPECIFICS OF YOUR SITUATION. BUT WE DO WANT TO PROPOSE A NUMBER OF IMAGINATIVE OR STRATEGIC MANEUVERS, POSSIBLY OUT OF OUR OWN DESPERATION, THAT MIGHT PROVE USEFUL.

Okay? Let's go. Firstly, we are excited that, as this project indicates, you have returned to the level of proposal. Because for an institution like The Boat University, immersed in the history of twentieth century art and architecture, this is where many of the most exciting developments occur. Even when such projects are realized, like Kurt Schwitters' Merzbau, their cultural currency comes from the way they return to or retain the state of proposition and model. We think of you like Archigram or Ant Farm. We reflect that many such visions are now realized, though developments in technology and awareness of sustainability issues.

So, to summarize the discussion so far:

1.Become model, made of paper.

... We are less concerned with the shift from imaginative proposal to reality. This is partly because we are interested in the degree to which proposals and models are themselves realities. It is also because we have few financial resources and our minds move quickly from one topic to another...

CONCERN: Is this insensitive to the specifics of capital, ridiculed by the 24-hour security? Let's talk about The Boat University's own situation. Here on the round pond, we have cut ourselves adrift, in full view of the Serpentine Gallery, the Royal College of Art, and the former home of Princess Diana, to none of which we have any formal affiliation.

We come here for respite from the intense gentrification taking place in Shoreditch and Whitechapel, eager for the relative peace a Conservative safe seat brings. We never set sail without checking the boat is fully stocked with at least six copies of Robert Smithson: The Collected Writings, a book of startling relevance to every subject we discuss, including this one. 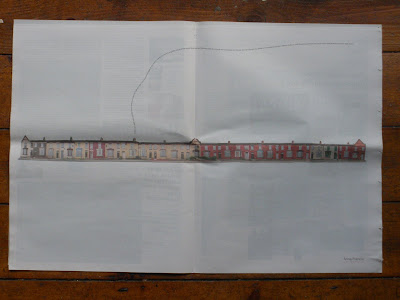 Anna Francis, contribution to Future Visions of History, 2008.  The thin line of text reads: When you walk through the storm hold your head up high and don't be afraid of the dark at the end of the storm there's a golden sky and the sweet silver song of the lark walk on, through the rain though your dreams be tossed and blown walk on, walk on, with hope in your heart and you'll never walk alone, you'll never walk alone.

When we need a break from discussion, we often rehearse a choral setting of selected passages from Smithson's 1973 essay Frederick Law Olmsted and the Dialectical Landscape. As half the group sing this, the others break into a cat-call of other names and books that might be useful, whilst someone usually seizes the microphone and mock-drunkenly reads Gregory Bateson's definition of the metalogue:

A metalogue is a conversation about some problematic subject. This conversation should be such that not only do the participants discuss the problem but the structure of the conversation as a whole is also relevant to the same subject.

It's so hot today. After fine-tuning this, we stopped thinking about your specific situation at all and engaged in an enjoyable discussion about Garden Cities, Plotlands, the design competition for Central Park, and the outbreak of artist designed Pavilions which have been appearing in the parks of London this summer. We, too, are a kind of summer pavilion. All of these delineate a certain territory of the imagination: the hand made, the improvised, the utopian, the mediated, pleasure and leisure.

But how does this relate to larger economic realities?

Someone in a passing boat interrupted this reverie by asking us to consider the relationship of the occasional and the permanent, taking into account the accretions of history and the yearning for tabula rasa, and all of us here at The Boat University became quite gloomy.

AN APOCRYPHAL ANECDOTE: Sometimes, we steal one of the rowing boats on the Round Pond and row down the Thames to the site for the Olympics.

Perhaps this resembles the site for your Garden Festival? Perhaps your feelings resembled ours and you, too, walked in silence amongst so much potential. Here it seems unreal to have such clear space so near the centre of the city. Such a clear space for imagination and projection and, of course, it is also likely that what is built cannot equal these imaginative visions. So such spaces become forever a space of trauma, where the utopian was admitted again and then finally defeated, cruel how they are always allowing possibility, but also exciting.

... Our hour is up and they are calling us in from the shore. The developers have left the water, changed back from fish to human. I can see them of them on their Blackberry's, ordering Robert Smithson: The Collected Writings from Amazon UK, eager to see what the fuss is about...

... Friends of the Boat University, we've reached the beginning and the end simultaneously, which makes us all giggle. Are we a garden? Are we a garden festival? Are we a memory of one, confused in our minds with triumphant Olympic swimmers, cyclists and plants? Our discussion ends with a recreation of an earlier Boat University seminar:

As I row back to shore I'm going to recite passages from thinkers such as Paulo Freire and Ivan Illich. You will probably be unfamiliar with these revolutionary thinkers. They can seem a bit dated now. But they underpin all that we have talked about today, so I'm disappointed some of you have tucked your notebooks into your underwear and jumped overboard. I'll also tell you about my cousin who is 12, and goes swimming at 5 every morning, before school, dreaming of representing Britain at the 2012 Olympics. It's an inspiring story, I promise, and then we will talk of all this no more...

Langtree McLean have been backed by Liverpool City Council in their plans to redevelop the site of the International Garden Festival into a mixed-use, privately owned 'transformational redevelopment.' View images of the plans here. For a free copy of the newspaper e-mail danieljsimpkins@googlemail.com. THE BOAT UNIVERSITY is often found floating on the round pond in Kensington Gardens, London. Other contributors to the newspaper were Lawrence Bradby, The Caravan Gallery, Mike Carney, Reg Cox, Anna Francis, Nelson Guzman Avellaneda, Jim Hall, Derek Horton, The Institute for the Art and Practice of Dissent at Home, Esther MacGregor, Malcolm F Miles, Euphemia P Niblock, Daniel Simpkins, Stephen Sharp, Sarah Smizz, and Penny Whitehead.