KILL YOUR TIMID NOTION: KEN JACOBS WHAT DID YOU SEE 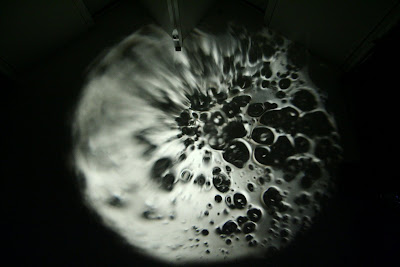 Some way into his Sunday lunchtime talk about his work, Ken Jacobs stopped and reminded the audience of his performance the previous night. So, he said. What was it like? What did you see? Although there were lots of thoughts and responses to Jacobs' work in the session as a whole, there was silence. Which felt kind of terrible, after all that effort. So this post is partly a delayed response to that question.

What did you see? This could a bit random, but that's okay. Perception and response to a work, like Jacobs' own dialogue of 2D and 3D, struggle to balance the ongoing flood of sight and thought with a particular event and an image or moment within that event. So here goes -

What did you see? On the screen Jacobs presented a series of images. Focussing on the image rather than the technical process involved, I would say I saw a still photo - in one case seemingly of paint - that began to flicker and palpitate. This caused inconsistent effects: parts of the image move, others don't, whilst across its surface there are similar shiftings in and out of focus, between planes of surface and illusions of depth.

What did you see? I saw below me the landscape of an undiscovered planet, and some strange molecular dance going on in paint and metal and hand. I saw something acquire qualities of conscious life. I saw some movements that were simple loops, shifting back and forth between two positions, but it didn't feel limited or mechanistic. Generating atmosphere, was one way I thought of it. 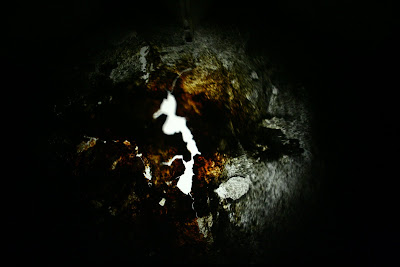 What did you see? Each new image starts again a slow, deliberate, obsessive, both mechanistic and organic, process of creating life, never totally sure of its likely success or failure. I know I'm writing more about process than about actual things seen. But I think the piece shifts perception to this level.

Such movements created a world that could be inhabited in a continuous present, but as soon as the projection stopped that world vanished and I have carried only a few traces away from the experience. Actually, just one: a memory of smoke. Or maybe it was clouds.

Instead, what I am left with is a seres of tactile ideas: principally of LANDSCAPE, ANIMATION, CINEMA and ILLUSION.

What did you see? This has become different questions: What is landscape? What is conscious life? What is cinema? What is it like to sit here now? I'd like to make big, bold instinctive propositions equal to the high IMAX screen and the generosity of this performance:

LANDSCAPE is how the formal depth and surface becomes dissipated into an aesthetic experience.

ANIMATION is not the illusion of movement but the point at which the image acquires consciousness.

ILLUSION is the conviction that I could never be conned or connected by an image so enormous.

LANDSCAPE is when the image becomes a place we can inhabit like a woodland or a chair or a latte. 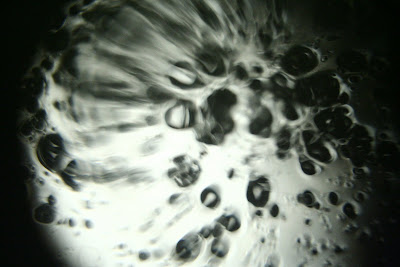 Actually, if the details of Saturday's performance are a bit slippery, that doesn't mean I can't immediately bring to mind a certain sense of the image, its movement and momentum, particularly as it is structured by the flicker.

The flicker is a mnemonic, that enables the piece to be reconstructed. I can see it now, in my imagination, functioning like a story structure that enables other details and images to gather around it. But of course what gathers is much more strange and  multifarious than Jacobs' images alone.

Such acts of memory, of course, being their own Nervous Magic Lantern event.

What did you see? Listening to Jacobs' talk on the Sunday morning, which included screenings of works including Capitalism: Child Labour (2006), I found myself trying to relate two repeating themes:

(1) Jacobs interest in art emerging from his life, "breaking away from self-contained art" and (2) long term preoccupations with the relation of 3D and the flat screen.

Like the IMAX performance, Jacobs' talk combined an exploration of film history with an assertion of the contemporaneity of what he talked about- he described Muybridge and Le Prince as "contemporaries in my madness... the guys I compete with." 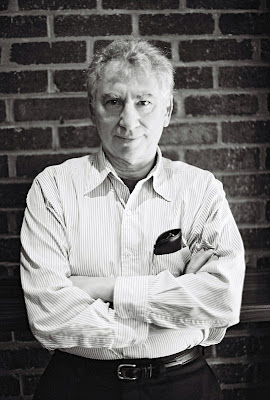 This is a summary of the talk from my notes:

Jacobs began with the Victorian stereograph, where viewers could look into an eyepiece to see two images transformed into a 3D landscape. He talked of a resulting capacity to "soar within the image," "investigating around" and the heightened state whereby objects took on importance in themselves rather than for what they implied.

What interested Jacobs was the transference of this intimate private experience onto the big, flat screen. He talked of the films of Le Prince as attempts to think visually in 3D, and of how, as cinema developed, the stenograph became a sequence of single images, with story and the charm of personalities the dominant tactics teaching audiences to read the strange flickerings before them.

Jacobs described his own focus as "immediate capturing of phenomena of the world as a 3D world." In the 1980's he investigated sequential frames on a single strip of film, before incorporating Alphonse Shilling's practice of interspersing black frames into the film strip - hence the origin of the flicker.

He was interested in the creation of qualities of depth, which he related to his earlier studies of painting with Hans Hoffman - Jacobs observed that noone could have made pop art after coming under Hoffman's influence.

As well as space, depth and 2D-3D effects, Jacobs was interested in the "non-life motion" or "eternalism" that resulted from this method, whereby  a "gesture keeps going in one direction as long as you wish it to happen."

It also fitted with Jacobs description of religions and other systems that seek to define and control as "neurotic." His film-making emerged out of a politics where "so much [is] beyond our grasp." He saw  himself "skimming the surface of things... lost in wonder." 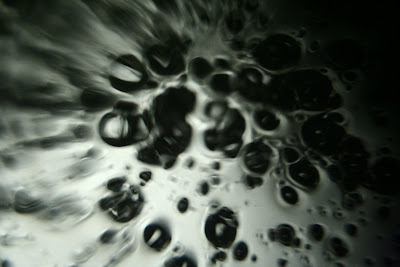 What did you see? Jacobs also talked eloquently of how physical film travels through time and space, having collisions resulting in the nicks, scratches and dust of its surface, describing such a process as "adventures in time... collision... something happened... met up with another force... it touches me... physical film has a life."

A final question about colour prompted Jacobs to observe he maybe wasn't a natural colourist and would need to "live two lifetimes to properly address colour."

There was one final doubt. In the 1950's devising and filming street theatre with Jack Smith was a way, as mentioned above,  of breaking away from  "self-enclosed art." Jacobs said how  with his recent work he was "worried about entering that phase [of self-enclosed art] again."

Watching the IMAX performance, as well as the recent Tank TV retrospective and the 7 hour Star Spangled Banner to Death, reveals this to have always been a highly productive tension.