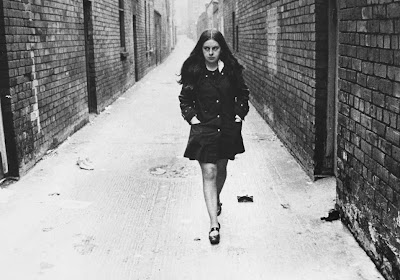 Thinking afterwards about Duncan Campbell's Bernadette, it seemed as if the film divided into two quite distinct sections. There was much that complicated this simple division, but, like the split communities of the 1970's Northern Ireland the film evokes, such a division remains, forever raw and insistent.

So the film's first section, if that's what it is, involves the careful presentation of a range of TV imagery of Bernadette Devlin, as she  takes part in street protests and press conferences, gets elected aged 21 as MP to Westminster for Mid-Ulster, and is imprisoned for her part in barricading and defending a Catholic area of Derry.

Campbell's film is almost a test case for how such footage can be used to set up a counter-version of its own news-bite priorities. He shows the bit just before and the bit just after the broadcast interview, the rehearsals, the second takes, the standing around when the lights fail, the TV reporters recording themselves "listening" to Devlin before conducting the actual interview.

Bernadette depends a lot on the sense that these moments - with their apologies, their facial expressions - are where the meaning really lies and we can step from the constructed image to something more meaningful. Such meaning is only an interruption, a shift of time frame, a technical failure away. Campbell also relies on the drama of the media moment itself, where Devlin's quick-witted, sharp, vulnerable toughness emerges all the clearer removed from the flow of the evening TV news and topicality.

Not that all this manipulation isn't contradicted from the very beginning: a sequence of close ups of Devlin's hands, eyes, feet, and a stony floor. In the second part of this 37 minute film, too, there is a white sky, which a crow crosses, or upon which flicker some animated blotches and lines. Now the soundtrack comprises Devlin - I asssumed it was Devlin. Maybe it wasn't - reading from her autobiography. But the text is not offering her own version of what we have previously seen.

Or, if it is, it is framing it very differently: a series of doubts on the nature of the self; the workings of memory and identity; bubbling up of childhood moments that counter the TV news Devlin. If the news footage highlighted Devlin's skill at producing catchy soundbites, now certain phrases obsess the narrator - when, she wonders, did she first start saying "christ" all the time. Aside from long shots of sky - also, of course, white noise of TV after close-down - the contested streets of the opening are now replaced by shots of fields and gardens.

Whilst watching I found the first half mesmerising in what it obtained through its extensions and manipulations, but was less convinced by the second section. It seemed to state a somewhat cliched position: behind this public persona there were doubts and psychological tensions. But as I thought about it I was less sure this was what was going on.

Given its subject matter, the film had to stay close to a simple, crude and obvious division - as Devlin's marxist socialist community politics was bold and clear. What comes after the Stormont government? a reporter asks her. The peoples government, she replies without hesitation.

Actually, what is going on involves the audience. I don't know what public knowledge amongst HOTEL gallery goers might be of Bernadette Devlin, but I suspect a lot of it might be quite close to mine, which is zero. Rather than seeking to add information to my ignorance, I sometimes felt the film was trying to make it less than zero. If the first half expands the media image then it also does this through erasures and deletions, of interviews without sound, or where the sound has become muffled and distorted. 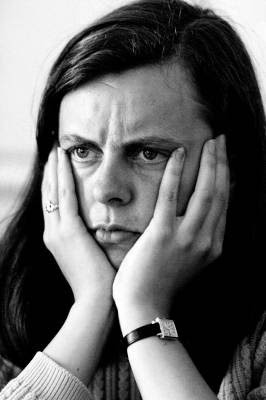 Devlin, too - and it is emphasised by the variety of film stocks and manipulations - has a very chameleon like image, ranging from a kind of archetypal black haired Irish beauty, to an awkward teenager with bad teeth, to a suddenly shrunken dwarfish figure behind the press microphones at the UN in New York. The more you see, the less surety about what you know.

The (thwarted) desire to know about the historical Devlin is, to a degree, replaced by a fascination with this figure presented by the film alone. This can produce a second desire which is to know what happened to her afterwards. Part two, as much as anything else, absorbs this curiosity into its white-out sky, refuses to tell, instead allowing only anxieties of self-hood to be voiced. Maybe these are Devlin's doubts, or ours, or British and/or Irish history, or the viewers sense of relationship to the film.

This is not about teleology. Campbell has no narrative towards the peace process, or towards more violence, or hunger strikes, or towards Devlin's "success" or "failure" in later life. There is only the sky and the countryside and a few digital doodles as a kind of limbo. I think everyone, Devlin, Campbell, us, ends the film rather puzzled about what it means, how it relates to now, what we know or don't know.  But Campbell's refusal to tell, show and reveal is a stubborn equivalent of Devlin's strength on the streets, if one made in rather more comfortable conditions.

Of course, after the film, there is Wikipedia, although I won't say what that tells. The film seeks to enter its subject into a certain historical record by uncompleting its story. This, of course, is one of the ways that the film differs from Steve McQueen's Hunger, and you'd be hard put to connect the films as part of the same struggle or situation. Hunger was criticised for its lack of context, but actually seeks to add a layer of physical experience to that historical record. A hint of this certainty would destroy the ambivalence on which Campbell's film depends.

What are the implications of this? Writing of Becketts Comedie (1964) in his Life in Film selection for October's Frieze, Campbell observes:

The thing I find most powerful about the film is the blackness... It is a constant presence, always ready to consume the characters as the spotlight shifts. It makes the protagonists and their farcical triangular relationship very precarious, only just able to register. (55)

Actually, several of Campbell's choices - such as John T.Davis' Dust on the Bible (1988) or Chris Marker's Sans Soleil (1982) - are films that attain this balance between abstraction and drama, of high intensity and only just being able to register.

That the demonstration and obtaining of such a contradiction might be how to understand Northern Ireland, or any other political reality, is one of the outcomes of this thought-provoking film.