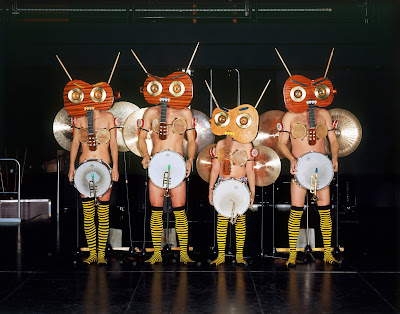 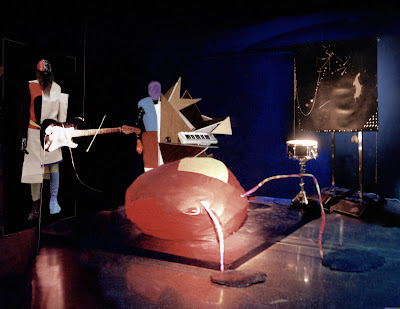 The following is a quotation-gathering through issues raised by two recent exhibitions: Jeremy Deller, From a revolution to another at the Palais de Tokyo, Paris (Sep 26- Jan 4 2009), and Experimenta Folklore, Frankfurter Kunstverein (Dec 12 - Mar 1 2009), neither of which I've seen.

As a method, such a gathering finds its most recent precursor in Zoe Leonard's A Continuous Signal: An Essay of Excerpts and Quotations, published as the conclusion to her monograph Analogue. Here, to open a territory, are two quoted quotes from Leonard's assemblage:

For more than twenty years, through my own labor and individual initiative, in all the venerable streets of Old Paris, I have been making photographic negatives measuring 18x24cm... This enormous artistic and documentary collection is today complete. I can truthfully say that I possess all of Old Paris. (173)

[An] Analog [is] a representation of an object that resembles the original. Analog devices monitor conditions, such as movement, temperature and sound, and convert them into analogous electronic or mechanical patterns. For example, an analog watch represents the planet's rotation with the rotating hands on the watch face... (176)

Photographs of shoe parts, whole shoes, heels and lifts were put through the xerox, often many times over to get a thoroughly decayed image. Tracings and silhouettes were projected over the xerox and filled in in pencil. Thanks to the many friends who have sent me shoe objects and supplied the imagery for these pages.

The written materials came to be the following: a 19th Century Glossary of shoe terminology; a letter from Tony Ramos containing a list form the Island of Sal in the Cape Verde Islands; a letter from Geoff Hendricks containing a dream of shoes; two accounts of my own concerning green sneakers; a list of "Findings" (the smaller things on finished shoes); a list of technical terms from Industry combined with proverbs.

These lists and the xerox prints became the ingredients of these complementary landscapes on facing pages in varying densities of gray. Getting this together was like sorting stones and putting them into dishes underwater.

Let's recoup forms perceived by the contemporary scene as degraded or obsolete, let's re-stage folk performance and lay theatre in the inappropriate context of centres of 'high art.' Let's embrace the much-maligned forms of Morris and Mumming. Let's make a collection of found motifs - from dances, songs and events - to synthesize a Folklore for an 'imagined village', founded through the performance of these becoming-traditions.

Our nostalgic longing for a non-existent past opens a space of possibility. Let's forget the Englightenment origins of Folklore, the romantic search for genuine folklife and an authentic anthropology at home. Let's imagine a new land, Englishness not enclosed by the violence of authentification or by the authoritative conclusions of Victorian and Edwardian folklorists. Let's open the purist enclosures to emergent traditions, whether invented by organic, rural communities or by boy and girl racers who come together to cruise. 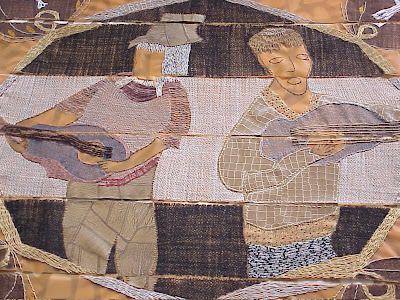 3.JOHN WYNNE AND CLICK LANGUAGES OF THE KALAHARI DESERT

The click-languages I recorded in the Kalahari Desert are an immensely rich source of sonically unusual vocal material for anyone not accustomed to them, and when I first played around with them on the computer, everything I tried sounded interesting. But the challenge is always to do more than just play with the words and the sounds.

I'm not altogether sure what attracts me to the political and ethical minefields that I repeatedly find myself working in; there is always a tension between, on the one hand, the need to respect and somehow convey the context of the recordings and the content of what is being said and, on the other, the desire to explore sound itself and to express myself and the ideas and issues that interest me through work which is not purely documentary.

4. BHANU KAPIL: PARAGRAPH FROM INCUBATION: A SPACE FOR MONSTERS

Here in the U.S., cyborgs reverse the basilar process; the occipital process, the process of change, which is pleating. A pleat is a fold. Unsticking her, my silver girl with her Pepsi eyelids, Laloo, I blessed her. I couldn't help it. Her skin was harsh and dry and so I took her to the doctor. There in the hospital, I let her check in individually, like a portion, while I went looking for something to eat, being a person from a town and thus reliant upon the almost daily intake of mountains of food. What follows is a beautiful story of the kind I'd relate to out-of-town guests on nights when the electricity failed and we had to eat dinner by candlelight and pee in the backyard. "Do you have health insurance? What is your social security number?" I'd been eating sauerkrat in the basement cafeteria and when I returned, she'd gone. "She left before we could sew her back up. She won't get far. Does she have health insurance, do you know? Do you know her social by any chance? Are you a blood relative? Do you need a clipboard? Here's a pen." I am writing this in  a fluorescent kitchen, I mean foyer. There are magazines, elevators, and ladies with healthy-looking teeth. It must be something inside them that's the problem. Pans beneath each chair to collect the grease. (24-5)

In the West, information about the Lebanese Civil War tends to be reductive and vague, if it exists at all... Raad's approach, however, isn't to provide missing information in the form of broad summations, simple answers, or anguished autobiography. Instead, he begins with more pervasive conditions of loss, with blank spaces in the historical and political records, and with repressions that the human psyche imposes upon itself as a shield against trauma. It's a place where the language of disappearance and the disappearance of language are blurred. 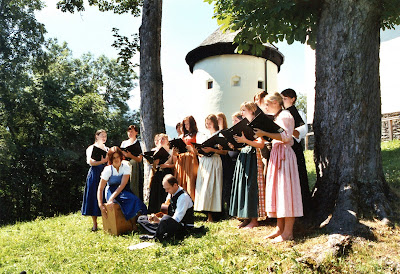 ... his project is a kind of conceptual documentary that engages issues of representation by focussing on documents - or the lack thereof- pertaining to the Lebanese Civil War. These documents may not always be completely accurate. But if, as Raad's work shows, beauty and terror can be found even amidst the most mundane circumstances accompanying war, then how can it be possible to construct an unequivocal depiction of their surrounding historical and political contexts, given the complicated issues underlying the conflict in Lebanon?

Yet his work is clearly dissatisfied with simply occupying a position of easy ambiguity. Rather, its obsessional and repetitious depiction of various aspects of the war - from car bombs to horse races to sunsets - results in a documentary method as palimpsest carefully recording the personal and collective accretion of memory and forgetting. (64-5)

... Unlike the archivist of early last century, Jeremy Deller and Alan Kane's project Folk Archive (2005) is unapologetically temporary, unauthorised and subjective. It sketches makeshift tableaux of schizophrenic and diversified national identity, and of their tastes. Here no distinction is apparent between Folklore and Fakelore; old traditions, the vernacular art and emergent youth-cultural forms are all archived and valued as Folk. Let's imagine these contemporary folkloric events being learnt in schools, like Cecil Sharp's and Mary Neal's collections of folk dances and songs, recorded, preserved and transmitted practically between generations, through teaching and repeating. A primary school class copying the winner of Egremont's gurning competition, mimetically from video...