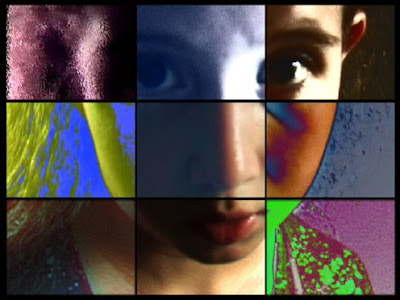 A long, uncut take is not at all the same as a long uncut motionless take, and, even there, the people who've used a long, tripod take with no camera movement at all, tend to rearrange things in the shot so that the visual elements are changing and the eye is being directed even when the camera doesn't move. I'm thinking of Ozu, who uses the screens in Japanese homes to cut off one space, direct the eye to a new place, and also the movements of people in those scenes - close to the camera, seated at a table, then walking off, far away - to direct the eye.

But, more to the point - the long takes in films like I Am Cuba and Children Of Men - or the long opening take in Touch of Evil, in The Player, or in Snake Eyes - are filled with activity, with people moving in and out of frame, or (in the latter two) a steadicam following characters through all kinds of visual changes, and the eye is every bit as busy keeping up with the movement and new visual information as if they were doing rapid cutting.

It's the fluidity of such shots that make their power and grab our attention; a kind of tour de force, where we hold our breath and see how much more they can show us while still not cutting.

And the real power is that -- when rapid cutting has become a cliche, particularly of action sequences-- the uncut take that has action and violence in it - as in Children of Men, which does this beautifully and very effectively - we aren't prepared, by a cut, for the violence which erupts in those long takes: a kidnapping on the street, an explosion while Theo surreptitiously pours whiskey into his morning coffee, the sudden outburst of street violence in the third act scenes in the refugee camp.

Because we're not prepared by cuts for these, their violence feels as random as it does in real life, when violence usually erupts out of the blue, confusing us - that sense at first of not knowing what's going on, what's even happened.

So in this way, the long take is not about letting the eye take things in, but about getting the same explosive, surprising rhythms that rapid cutting first gave us many years ago. Here's a  quote from a filmmaker, Anne Seigal, whose work I don't actually know, but I think she sums up it: "…ambiguity is something that has to be added to the image. One of the places where I thought I could add ambiguity was in shot length – you'd get to the point where the shot would naturally end and you wouldn't experience an ending. And therefore, because you don't experience an ending, the whole idea of when the tension is going to be resolved, in a classical sense, is totally up in the air."

This is a very different use of long takes than something like James Benning pointing a camera at a lake for twenty minutes.

Even though Atonement's long take in the battlefield tried to do this and failed (to my mind), that long take is full of twists and turns and the revelation of the British Army's defeat at Dunkirk. These things are intricately planned by the director, and the DP, and I know they plan very carefully for where the eye should go in such takes. There's very little time for the eye to meander over  on the screen: a cut is not the only way to direct the eye, not even the most powerful.

Camera movement, color, the rhythm of movement in the shot, light and sound are all used within long takes to tell the viewer what to watch. In fact, because they're not alerted by cuts, it could be argued that the long take actually controls the viewer more, not less. Makes the viewer play much closer attention, because he can't just sit back and assume he's going to get visual information in the order he's accustomed to.

A standard master wide/ medium shot/ close-up, reverse shot - can actually have the effect of much more stillness, since it's so predictable. Or in a film like, say, Days of Heaven, the shots, the cuts, are so carefully, so seamlessly, connected it makes one feel the camera is wandering over the landscape for us, albeit with cuts in place, because the cuts are not abrupt, but gentle.  A "cut" is not inherently more violent or jarring than the lack of one. It depends entirely - on both long uncut takes and cut ones - the nature of what's being shown.

Julie Talen is a film-maker and writer based in New York. Her multi-channel film Pretend will be released by Re-Voir in 2009. The above text was partly written in response to last week's article on the long take in Jean Rouch's Tourou et Bitti, which can be found here. The meaning of the long take, how it is experienced by the viewer, and its prevalence in contemporary artists' film, were subjects that dominated May's The Art of Andrei Tarkovsky symposium at Tate Modern - read about that here.