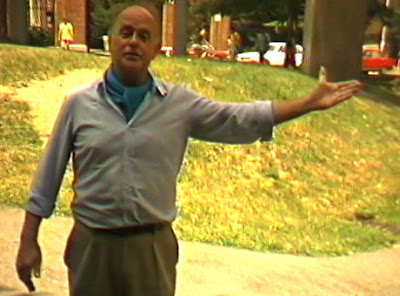 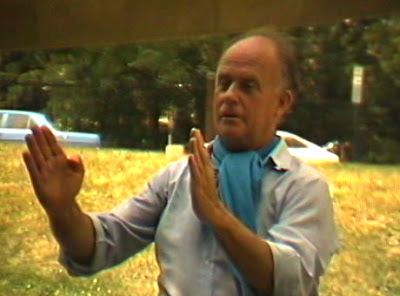 To film an event with a single roll of film. To begin outside the event, state your intention and enter. As the film ends to observe it is time to leave and to do so, withdrawing even if the event has not reached its conclusion.

It's a powerful act, and it structures Jean Rouch's  Tourou et Bitti (1967). I don't want to tell you the specifics of the event concerned. I'm focussing instead on the effects of stating the premises and framing the film in this way, how it shifts the film in the direction of an encounter, the indeterminate and incomplete. 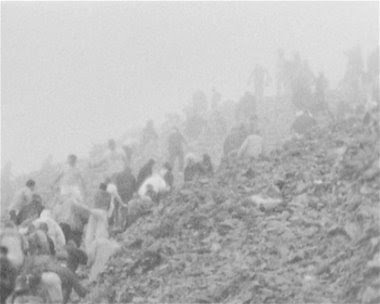 Of course, as the reaction to Rouch's films and ideas often proves, there are problems and questions. Is this structuring device known to those he films, or is it merely something for the film-maker? In Tourou et Bitti the film-makers search for meaningful footage is mirrored by his subjects searches for states of trance and spiritual possession. Do Rouch's framing devices constitute an act of respectful, critical distance or do they actually elevate the film-makers and his own methods above that of what he observes? 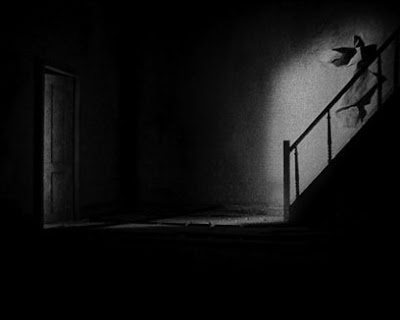 Rouch's little seen film opened Ben Rivers selection of artists' films as part of the ICA's Nought to Sixty season this week. In his introduction, Rivers stressed his own interest in ethnographic film, its history within academia where it was connected to a sense of capturing truth, and the artist's freedom to draw on this tradition with a greater freedom in how they responded . In fact, watching the films that followed, one could say that the artist probably has the opposite professional pressure: a need to produce something ambiguous, mysterious, playful or dismissive regarding notions such as truth and record.

This was a diverse and entertaining program in which films dialogued with each other. Rouch's film was strikingly paired with Steve Reinke's The Mendi (2006), where ethnographic film entwined and was transformed through Reinke's combination of monologue and image manipulation. Barry Kimm's Measurements of Oxford (1989) was a delightful fusion of conceptual project and participatory documentary, as Kimm invited various citizens of a small town to measure objects and buildings that were important to them. Underlying the film, of course, was less a desire for measurement than the use of such a premise to explore the rhythms and characters of small town life. This was also present in Rosalind Nashashbibi's more elliptical Midwest (2002), but it was noticeable that Kimm was the only artist who appeared, Rouch-like, to consciously engage and provoke the people he encountered.

Indeed, taken as a whole the films offered various pathways following on from a rejection of recording the truth. Like Kimm and Rouch one could move towards engagement with people, presenting audience and/or subjects with a stated premise. Or like Midwest or Karl Kels' marvellous Prince Hotel (1987/2003) - a study of the men clustered around a flophouse - one could become an observer of random movements and gestures. Perhaps these two positions are less distinct when actually making a film, but they definitely served as distinct categories for this viewer.

Rivers also included two of his own films, The Coming Race (2006) and We The People (2004). These seemed to have distanced themselves even further from the ethnographic film than those he chose. Or rather they seemed to have taken its components and distilled them into some essence that was as conceptual as it was lyrical. In We The People, there were only the sounds of people as the camera roamed a deserted and - I think - model town. In The Coming Race crowds of people scramble and climb over a rocky mountainside, disappear amongst clouds at its top, the inspecificity of their actions and gestures raising questions not just about this particular scene but about human nature, representation and perception more broadly.

The evening concluded with Ben Russell's Trypps Number Three (2007), a film which appeared to adapt Rouch's technique to filming the audience at a gig. It offered a useful example of one way Rouch's technique functions differently forty years later. Here there was no statement of intentions and methods by the film-maker. Rouch's technique of stating, participating, and withdrawing, was replaced by a shift from a recording of an event to a space where - through a change of sound and a sustained focus of attention - the image itself became a tangle of objective and subjective, interior and exterior.

This meant there was no need for the film-maker to neatly leave prior to the conclusion of his roll of film. When the film reaches such a space there is almost no difference whether the camera leaves or stays.