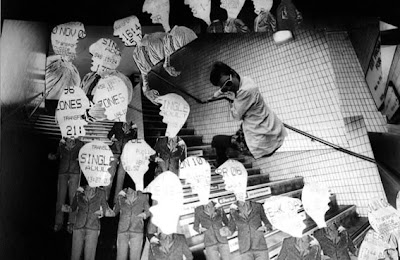 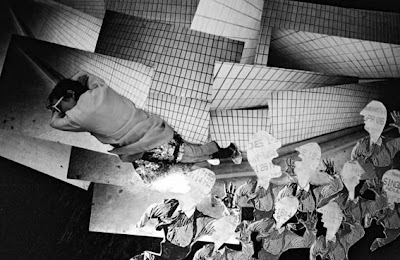 
Normally I remember each and every detail about everything but for some reason my recollections of the phenomenon of the subterranean cinema run by the group known as La Mexicaine de la Perforation remains hazy at best. Perhaps there was something in the liquor they served: a mind-bending memory-erasing elixir mixed in with the Pernod.

I think it was Laurent Viel who first told me about it.  He said something about a subterranean cinema in Paris near the Cinematheque Francaise at Palais Chaillot. It was 2004. I guess by then we knew the old Cinematheque was soon going to be lost forever.  My producer and friend Humbert Balsan who was the acting President of the Cinematheque was behind that to some degree and we argued about it quite a lot.

The activities of LMDP were something I knew about. I had attended a concert and an exhibition underground several years before which I found quite honestly to be dreadfully boring.  This is why I never joined a fraternity, I remember saying to a friend.  There were perks of course to make up for the dreadful music and stale underground air for instance the pretty youth of both sexes wearing Dior Homme as if they were Levis.

It would be fair to say I was turned off as I am by most events that involve milling about with no purpose where the band is drunker than the audience and the art on the walls looks like something you might find in a bad hair salon in Ibiza. Still for me the idea of an underground cinema that met in secret was very much a draw.  Cinema in a new setting.

My first instinct was to invite Humbert to join me. He was always game for an adventure if you could find him. I ran this by one of the organizers of and a kingpin member of LMDP who freaked out.  He seemed to think the jig would be up if the President of Cinematheque found out about their "cell." But he didn't know Humbert like I did and I reassured him.

Humbert's reaction was as I expected.  He said it sounded like fun and he was game.  "What films are they screening?" he asked and I told him I didn't know because nobody was able to answer that question for me.  I said, "I think the films are beside the point." "Then what is the point?" he asked laughing out loud. I said, "I think the point is to take a stand for cinema and against the multiplex and that we ought to go to show support. He agreed though added it would probably be boring. 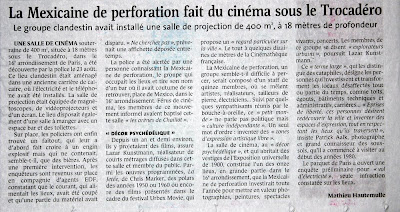 On the night in usual fashion Humbert didn't actually show up but I didn't let that get in the way. I went on my own.  The first time I went they were screening a David Lynch film and I had watched the film many times in better circumstances.  By the time I arrived the film had already started anyway as no one could answer in advance what time the screening would begin.  As I predicted it wasn't going to be about cinema. Nobody really watched the film though people discussed cinema.

Then again in Paris most things are only ever about socializing. Cinema and just about everything else is only a means to an end -  that end being getting together with like-minded partisans to destroy the reputations of others. In this way the subterranean cinema did not disappoint. I ran in to many artists and writers who I know and spotted lots of others I knew only by reputation or from watching them on television's culture circuit.

There were many young actors there who I was more or less avoiding over ground or vice versa and more model/musicians than you could shake a stick at.  I left early certainly before the film ended and I'm pretty sure I thought I would never go back down there.  It seemed silly.

The next morning I phoned Humbert and as was his way he asked why I hadn't called him the night before. I pretended that the seven or eight phone messages I left him were an hallucination and he asked about the cinema. I said something like he was lucky to have missed it and he came back with "There are limits." which was Humbert's elegant way of ending any argument or conversation that had passed its sell by date.

But funny enough each time I heard about another LMDP screening I found myself answering the call and making my way down those steps and braving the crowds to be part of what was going on there.  I must have gone about seven times whenever I was in Paris and I heard about it. 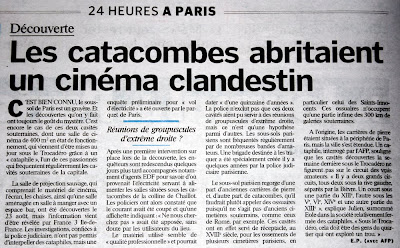 I mostly went there on my own and stayed sometimes for only twenty minutes and on occasion until the wee hours of the morning.  There was something exciting about celebrating cinema in close proximity to the spot on which Henri Langlois raised hell saving the history of cinema for future generations of cineastes to at first cherish and eventually trample over.

The riots of May 1968 started within a stone's throw of the subterranean cinema and that in itself added a subtext that made the showings of often screened familiar films using bad prints and noisy age-old projectors and shown in the most dreadful conditions something of an act of defiance.

Had I known then that only four years later the very act of projecting films would be subversive I suspect I would have gone more often.

I'm not going to try to cover the history of the subterranean cinema or the actions of the LMDP here because I don't think I could. I only know what I experienced there.  Among the films I remember watching/experiencing there are APOCALYPSE NOW, SONATINE, LA HAINE, and experimental films by Maya Deren. At least I think that's what I watched.

The history of cinema will always be tied up with myth.  The scenes from films I believe I've watched but don't exist make up the most exciting pocket of my cinematic memory.  No matter how many times I watch ALL ABOUT EVE I still wait for the flashback scene of Eve working in that factory that doesn't exist but is described so vividly it exists for me.

In the same way the things I remember about that subterranean cinema in Paris seem to exist most vividly when I try to recall details that don't come easily to mind.  What I am quite certain of is that it always seemed to rain on the nights I went there. But I never knew until the end of the night when I walked up the steps to go home because the sound of dripping water was so much of a part of those nights spent underground.