MARGARET SALMON: THE MOON IS DOWN 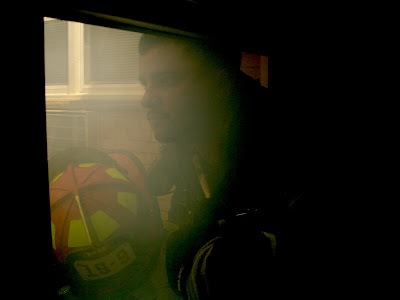 Last time I saw a Margaret Salmon film it involved three large screens, arranged horizontally in the main space of the Whitechapel Gallery. It was Ninna Nanna (2007) and each screen presented a mother at home with their child,  as the soundtrack wove together three renditions of the nursery rhyme. Guns Trilogy (2008), part of two works comprising the show The Moon is Down, also had three screens, smaller and arranged vertically. This time it was three war veterans and, although the lullaby had been replaced with the narration of each of the men, the sound still lapped and overlapped, sometimes explicit in its subject matter, sometimes becoming a musical texture of sounds and rhythms.

The similarities didn't end there. Like the earlier films, Guns Trilogy was black and white 16mm transferred to DVD for projection, showing an attention both to the formal quality of film and to the conditions of screening (a loud projector would be too intrusive). A shared visual style, too, mixing casualness and formal beauty, evoking Italian neo-realism and the Maysles brothers Grey Gardens - and with whom Salmon also shares an ability to locate rich, distinctive personalities. This isn't to say I found the new films overly-repetitive. Instead, a shifting tapestry of similarity and difference seems key both to Guns Trilogy and to Salmon's unfolding body of work as a whole. 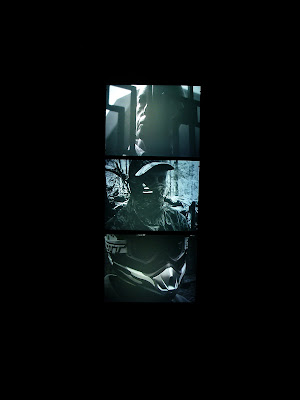 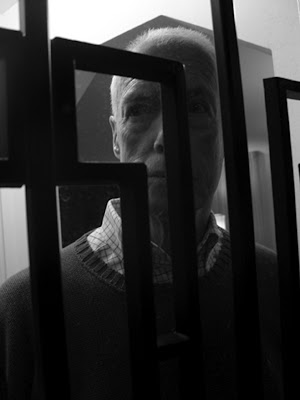 On three screens, then, the stories of three veterans unfold, whilst on the soundtrack their separately recorded stories are interwoven. One set of images, largely on the middle screen, follow a man hunting deer in woods in the snow, mostly sat still, in camouflage geer, gun posed, amid a makeshift hide of bare branches. Another veteran is filmed entirely in a domestic setting - he reads the paper, dances with his wife, sits in a chair, watches television, lies on his bed. A third man works as a policeman and his images are more varied - shots of him on a shooting range, at work as a policeman, lifting weights in his garage.

On occasion the shots are themselves manipulated - as when the man's movements at home are speeded up. But Salmon's most obvious manipulations are to do with the contrapuntal rhythms between the images and sound, and between the three screens. Sometimes the screens converge as if, despite their differences in setting, all three show the same psychological forces of being haunted and trapped by their (military) past. Or one or more screens goes black, or one story fills more than one screen. The result is a mix of intimacy and distance. The men don't know each other, but they become the ground against which each others stories are measured, each variously appearing, sharing, being overwhelmed by, becoming indistinguishable from, the others.

Whilst editing, presentation, and use of sound, moves the film beyond a conventional documentary structure, Salmon is definitely telling stories, and there are important acts of testimony which emerge from Guns Trilogy. The lone deer stalker's story follows a trajectory that asserts the beauty of aloneness and how nature is attracted to his stillness in the woods, before concluding the film with his decision to not go hunting anymore. Others, within the domestic context, tell Vietnam stories of shooting young girls who came towards them with grenades. No one is ever shown speaking, so the attribution of voice to image is to a degree the viewers choice, floating somewhat freely between the three men.

At the conclusion of Guns Trilogy the three screens fade to black, and there is an extended sequence of gunshot sounds. There's a clunk and a ring to the noise, which I took as highlighting the guns own machinations, mute chatter and laughter which frames the sound as part of the men's social and domestic rather than military lives. When the film loops back to its beginning sounds of windchimes, this, too, appears precariously close to becoming gunshot, testimony to a tentative screen between  present and past. Indeed, one way of reading this film is as an exploration of how history becomes manifest in the present, if we study the rhythms of bodies and lives closely enough.

The exhibition also includes Fireman (2008), this time in colour, shot on 16mm Ektachrome, transferred to DVD and shown on a TV monitor. This offered another chronicle of maleness, this time of a fireman, shown arriving for work, going off to a fire, and emerging safely at the end. In the context of this exhibition, the film was a useful coda to the more in-depth explorations of Guns Trilogy. 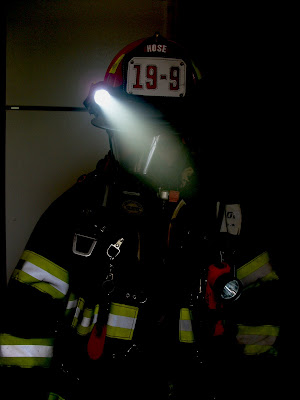 Often disappearing behind accoutrements of fire engine or uniform - or behind his own projector beam of a headlight -  I found myself noting the moments when a face, a gesture emerges. Indeed, post 9/11 the film seemed to be watching for the moments when an individual emerges from the archetype of the fireman. Intentionally or not, the image was often hard to make out as the viewers own reflection filled the monitor in the brightly lit gallery, aptly highlighting how both these films focus on particular lives and histories in a way that throws up both a question and a mirror.

Salmon's title for the exhibition is taken  from a novel by John Steinbeck, published in 1942, which recounts the relationship of an unnamed European community and its Nazi occupiers,  in part exploring the tension between the Nazi occupiers as individuals and as atrocity committing war criminals.  As well as its obvious connections to Guns Trilogy, this seems to speak to Salmon's own curious sense - as an American born artist now living in Whitstable - of America and Europe and the relationship beween them.

To make (and show) such work in the UK perhaps highlights its engagement with a certain myth of America, foregrounding a quiet use of such contemporary methods as re-enactment and fictional documentary.  For an artist born in 1975, such explorations of Vietnam and its consequences are also attempts to comprehend the near fit of an historical event and the span of her own life.