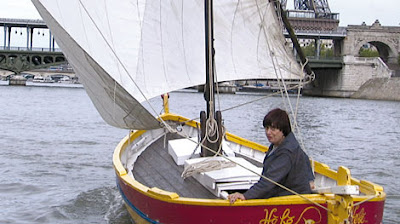 If there was one film at this years London Film Festival festival that had me leaving the cinema newly empowered about the possibilities of cinema it was also the film by the festival's oldest director, and may, the rumour goes, have been her final film.

Not that the film revealed anything but a vital, active creativity, theoretical sophistication  and a delicious wit. I so relished Agnes Varda's Les Plages d'Agnes for several reasons. It was a case study in how the most complex ideas about form and cinema can be explored through wit, humour, personal confession and eccentricity. Secondly, related to this, because it could engage with a whole range of experience and imagery: from feminist marches to a giant cartoon cat version of Chris Marker, from domestic life to celebrity portraits to studies of those living off rubbish gleaned in the street. Thirdly, it was an essay about the meaning of a life pervaded in cinema. Future historians could do no worse than show Les Plages d'Agnes alongside Godard's Histoire du Cinema when trying to fathom the meaning of a society based around representations of itself in film.

The beginning of the film involved Varda creating a stage set of mirrors on a beach. 'If you opened people up, you would find landscapes" Varda observes, "if you opened me up, you would find beaches." Mirrors, of course, evoke whole chains of cinematic references, not least Cocteau, but it could also be a cliche was it not that the resulting shots of complex frames within frames are executed so well. Indeed, later in the film Varda creates similar scenes of images within images through her digital editing programme. The scene works because the film sincerely believes representing your life is akin the interplay of images amongst a beach full of mirrors - and because it's fantastically executed.

The beaches got created again later in Paris, where Varda's office and staff are installed and working on sand piled up in the street. By that point Varda has set up the tone of her film: a loose, weaving autobiography of her life and film career, meetings with friends, and a more general presentation of her activities and personality. According to the people in the row behind me, this is Varda's  last film not because of any diminishing of her creative appetites, but because she no longer wishes to travel. The film did have a certain sense of summation and life reckoning about it. 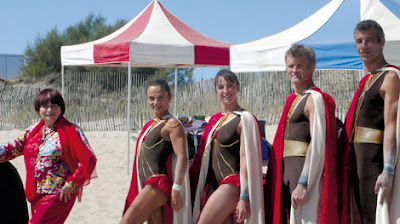 Inparticular Varda went to America, where she and Jacques Demy lived and made films in the late 1960's. Principally, she visits old haunts and friends - who are lovingly catalogued and named in a screen become a grid of head shots. Varda also ropes friends and people she meets into recreating scenes from her past. The enormous Chris Marker cat reappears and says in its funny computerised voice: "1968? Ring any bells?" to which Varda can only shrug and say she was busy doing something else. For Varda's sense of politics and history is not one relying on anyone else's marker stones. In her own time she documents her involvement with feminism, particularly protests about the right to choose. The film offers a model of political engagement very different from Marker's.

But what is that? In one scene, Varda shows herself wiping her mouth and face with a napkin and observes that she thought the camera was not on and that she is cleaning herself with "less grace than a cat." Together with every other scene in the film it presents a model of engaged, forthright politics that isn't afraid of personal eccentricity, pleasure, and considerable irreverence. A stone monument in the street is replaced with Varda's own cat, and to promote an installation at the Venice Biennale she dresses up like a potato and wanders around the pavilion. As, too, she can show us bundles of love letters that she wrote, decorating each envelope, and which were returned unopened; the house she rennovated, the rotten roof left unfixed because it is beautiful, and the room that was several times rented out for illegal abortions.

As a model of autobiography Les Plages d'Agnes is one where the details of her own life constantly open onto a more general curiosity with the world. When Varda returns to her childhood home in Brussels the current resident is a huge fan of model railways, which Varda, somewhat deadpan but also respectfully and with genuine interest, documents. When she leaves she notes it was the encounter with this man and his wife, not any personal memories, that were important. It's a sense of openness to what appears in the present that makes her enthusiastically searching the tables at flea markets into an apt image for her film making process and her sense of autobiography.

In a recent interview with Andrea Meyer in indieWIRE, Varda herself explains this approach through her concept of cine-writing. Asked what she thinks her films mean to people today she suggests:

I would say energy. I would say love for filming, intuition. I mean, a woman working with her intuition and trying to be intelligent. It's like a stream of feelings, intuition, and joy of discovering things. Finding beauty where it's maybe not. Seeing. And, on the other hand, trying to be structural, organized; trying to be clever. And doing what I believe is cinécriture, what I always call cine-writing.

You know, it's a handmade work of filmmaking -- that I really believe. And I call that cine-writing. 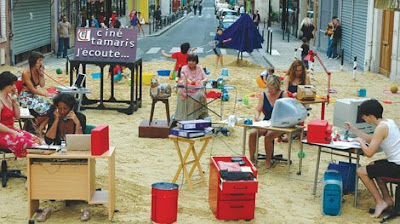 I'm listing lots of examples of incidents from this marvelous film to try and get at the mix of naivety and sophistication, and also the relaxed, anecdotal way in which its own theoretical sophistication manifests. I noted after the film:  the details accumulate into a history that is also a sense of charm.

Varda also documents some of her recent art installations, thanking those who have commissioned them for making her "feel like a young artist." Her work speaks so vitally of contemporary concerns, combining interests in, say, reconstruction, participation, and experimental ethnography, but all with an enviable, lived lightness. In Varda's life of film, life always escapes the limits of film, but her film making is dexterous enough to always be adapting and responding. Filming intuitively, in the more structured work of editing she can then find equivalents for this complexity through a shifting and layering of images and themes.

There's a huge optimism in Les Plages d'Agnes about cinema as a magical place for overcoming death and sadness, at the same time as it is the place where those can be explored most fully. For all its joy, this is also a film suffused in melancholy and sadness. Varda concludes her interview with Meyer, by outlining an attitude to life that also sums up some of the feel of this film:

Finding fun where sometimes it's just a bore; finding fun when it's a burden. You can always make something look different. Which is a way of saying that I'm, in a way, protected from being unhappy. There is a big unhappiness in my life and big pain. And I'm protected, in a way. You know, I feel that even the dead people around me protect me. So I'm not too much entitled to complain.