ON MAGAZINES: THE HAPPY HYPOCRITE 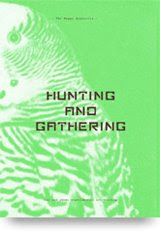 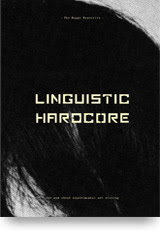 Along with F.R.David, the Happy Hypocrite is the foremost example of how the current interest in art writing is organizing and developing, at least within its more official art school and arts council funded contexts. Like F.R.David, HH has a thematic approach, but there the editorial strategies diverge. Each issue of F.R.David is a novel-sized assemblage of historical, re-printed and new texts. The two issues of HH have been slimmer affairs - a dozen or so pieces of new writing and image-pieces alongside a re-print resurrection of a long disappeared magazine.

Both HH and F.R.David don't have themes in a particularly prescriptive sense - it would be impossible to guess the theme from the majority of contributions on their own. HH is explicit about theme functioning as method, describing its latest issue as "work that digs into methodology using the  head (as Thoreau might have it) as 'an organ for burrowing.'" Each issue kicks off with two artists discussing the theme.

Here Marie Darrieussecq and Brian Dillon talk about such issues as working with found texts, whether or not they plan their books in advance, and the sexual connotations of writers hunting and gathering for material. A certain informality characterizes HH and perhaps this dialogue is deliberately pitched as a kind of intellectual pub-talk rather than anything more studious or researched. I never completely lost the sense that the theme could have been anything and they would have had a similar conversation about their working methods.

There follows a number of non-fiction pieces which can be seen to outline some of the formal characteristics of art writing according to HH. Start with what these examples don't do: Nothing overtly focusses on particular, identifiable art works or events. Nothing operates as expository, critical prose. A short story by Lynne Tillman and a poem by Andrew Shelley occupy recognisable literary categories - but the most common style of the others is a hybrid of fiction, theory and essay. The tone, similarly, is rarely lyrical but it does seem to favour a certain musical or associative logic that also holds to some useful balance of image and theory, where each constrains the possible excesses of the other.

Many pieces have a structural device that the piece enacts out, or re-write some existent structure in a series of numbered sections, takes or variations. Andrew Dodds "Deep in the Uncanny Valley" takes nursery rhymes and limericks as its starting point, Steve Beard offers a series of variations on the "Letter to a Young Artist" template. The same approach applies to Thomas Hirschhorn's Collages, which juxtapose shots of fashion models with photo's of dead and mutilated corpses. Hirschhorn offers something of a manifesto for the issue as a whole when he writes: 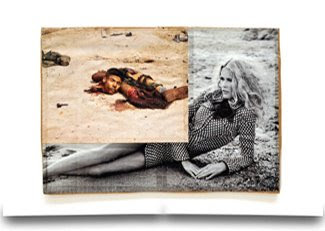 I'm motivated to analyse HH like this because the circumstances of its production - published  by Book Works and Arts Council funded - as well as the emergence of art writing as a distinct literary practice complete with its own MA course, do seem to require some clarity about how HH is different to a literary journal. The relationship to experimental poetics would also seem  a crucial one for how the journal and art writing more broadly develops. Andrew Shelley and Lisa Robertson are the only contributers to the two issues so far who will be familiar to readers of experimental small press poetry - and Robertson appears here as a translator, although both her poetry and her work under the guise of the Office for Soft Architecture would be on any art writing bibliography.

The question arises: will later issues draw more on contributers that  have long operated between art and writing - say, Alan Halsey, Robert Grenier, and Maggie O'Sullivan - whose work has behind it a genealogy reaching in many directions through LANGUAGE poets to objectivism -  or will its artwriters have different influences and different ideas of how to produce and distribute their work? Compare the stalls and work at the recent Small Publishers Fair with Publish and Be Damned if you think this isn't a real distinction of style, legacy and career.

HH has a very real engagement with legacies of art writing, in terms of the historical re-print each issue hosts within its own covers. Issue 1 reprinted a 1975 issue of Emma Tennant's Bananas, largely focussed around a J.G.Ballard short story and a Tom Nairn piece on Northern Ireland. Curiously, given the point here about poetics, it also includes a short personal reminiscence of a visit to a near-death Charles Olson. The piece has no information or examples of his writing - surely not that familiar to Bananas readers -  but we do learn that, when staying with a friend in Regent's Park, he rose at 8AM and had a breakfast of "six or seven eggs."

And this is the curious thing about these re-printed magazines: it isn't actually something I particularly want to read. It functions more as a gesture, opening up awareness of a particular space, or subject range, or a sense of recent magazine history. But there's no article that I would read with a burning sense of stylistic relevancy, or that seems to particularly inform the style elsewhere in HH. But maybe legacy is always somewhat illusive.

Perhaps this is why Issue 2 doesn't reprint a magazine at all, but a series of letters and other documents from the archives of self-described "Art Critic, Writer, Editor, Landlady, Art Historian and Collector" Barbara Riese in which, through 1975-6, she plans her periodical ArtstraA. Several documents feature various correspondents offering conflicting views on the associations of numerous potential titles. It's amusing and it highlights the processes of deliberation behind any magazine, but I hope Issue 3 can find a magazine worth re-printing for the continued relevancy and brilliance of its contents. 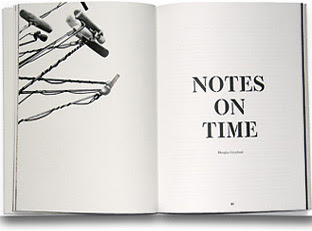 I'm circling here, trying to articulate something about different styles of writing and traditions. I'm feeling this is a moment where the distinctions of art writing and experimental poetics are dissolving, and that practitioners in both fields sense this.

But I've never heard much (or any) poetics mentioned in any art writing event, or found any such texts in gallery bookshops in London. I'm worried that the abundant fiction-essay-theory texts of art writing - and the claims for such texts - are being done with no awareness of the critical and creative work of, say, Lyn Hejinian, Nicole Brossard, Theresa Hak Kyung Cha, Ron Silliman, Leslie Scalapino or a younger generation including Juliana Spahr, Kristin Prevallet, Jill Magi, Thalia Field amongst many many others (the EPC at SUNY Buffalo is a good starting point for names and works).

Actually, though, a consideration of historical examples prompts the further thought that poets and art writers might not be on the same side after all. Most art-writing would look to Robert Smithson and Mel Bochner's 1960's magazine writings - notably The Domain of the Great Bear (1966) - as one precurser, but their work, and that of all the critics involved by Artforum, was partly inspired by a strong contempt for the - for them - overly subjective criticism that many New York School poets were writing for Art News. Perhaps LANGUAGE poetry and its successors took this formal, theoretical approach into poetry and poetics, but maybe on some level the contention remains.

Kristin Prevallet's statement of method in her brilliant [I,Afterlife][Essay in  Mourning Time] (Essay Press, 2007) suggests the abundant benefits of overcoming such distinctions:

I'm filled with holes. I used to seek spackle in my relationships with people. And I still have a hard time holding on. But really, there is nothing to be filled in. Knowing this gives me some comfort because it means that I have to live with my losses as one would live without an arm: being constantly aware of the phantom limb sensation that wants so desperately to connect, to be filled in, with flesh. But ultimately, I have to survive by rewriting the script that assumes spaces have to be filled in. They don't - like the universe, my holes are filled with their own energies, forces fields, and pulls. The challenge is to recognize this anti-matter as some kind of sustenance; to find holes in a certain kind of completion. (60)