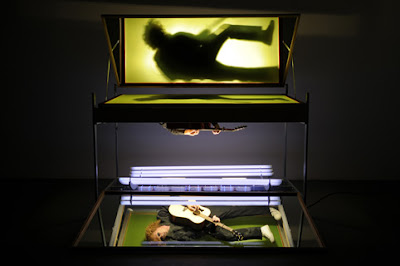 Let me explain. As I sat through large numbers of mediocre films at the recent London Film Festival, I realised how critically unconsidered this kind of cinema is. It's not bad, it's definitely not great, and it's hard to note exactly where that shortfall of distinction arises.

Sometimes it's an implausible rupture in a carefully constructed web of character and plot, sometimes its the very lack of rupture that afflicts. At the risk of prompting a boom period in mediocre film production, I shall try and dilineate some of the distinctions - if that's the right word - of this neglected area of study.

So, to state again: the mediocre film is clearly distinctive from the bad or the offensive film, which will have to wait for other blog posts. Nor does a mediocre-focussed reading require detailed textural analysis, for in the indifference it prompts there is rarely enough energy to absorb particular stylistic or scenic flourishes.

Indeed, both X, B, J and F - which were all screening at this years festival - could be identified with some or all of the following scribbled note:

What quickly becomes apparent is that indifferent cinema has nothing to do with narrative or non-narrative, conventional or experimental structures and devices. Indeed, indifference often occurs in the interzone between these categories - films which begin to open themselves to new senses of time and duration, mixes of fact and fiction, but ultimately only confirm a conventional cinematic experience, a conventional model of cultural production, acting, and a conservative set of values. Their flirtation would be infuriating, if it wasn't so uninteresting - here's the bus.

Indifferent cinema no longer believes in its own capacity for self-destruction and is over-calculated.  It believes it can be betrayed by the profligacy of hint, which, as everyone knows, IS IMPOSSIBLE! Even if it wasn't over-calculated at the time, click, it has somehow come to possess a sloven lethargy that it perniciously - if always sickeningly politely - tries to off load on the audience.

So to avoid this unpleasant characteristic virally effecting its theorisation I will use two ideas in my book-bag: a review in the Sep/Oct/Nov issue of Bookforum and the October 27th copy of the New Yorker. Both, it turns out, have much to offer this argument. 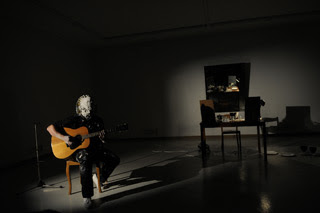 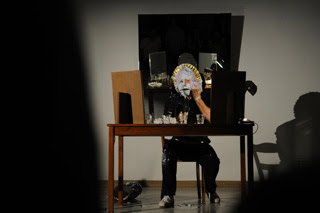 William Hunt, I Forgot Myself, While Looking At You (2008). Performance Still, 2008. Courtesy the artist.

In particular, Bookforum has a review of a new anthology American Earth: Environmental Writing since Thoreau, edited by Bill McKibben. Review Verlyn Klinkenborg unwittingly identifies the key issue of Indifferent Mediocre Cinema when she concludes:

For the feeling this anthology  [for "anthology" read "mediocre screen"] leaves in me - the great emotion - is that it has been entirely superseded by events. It describes a distant and middle and recent past that has been engulfed in spiraling environmental crises. We will never have the terrible opportunity to watch the extinction of the passenger pigeon [for "passenger pigeon" read "plot implosion in Le Parc"] ...

We have a much more grievous opportunity: to watch multiple, successive extinctions as the sky overheats and the oceans go pale and habitat vanishes [or, in this case, films with unnecessarily violent ends]...

I have every faith in nature's recuperative powers... What I doubt is our ability, as a species, to see and, having seen, to continue to pay attention [read: "the long take as liberating the viewer"]. (16)

Putting Bookforum and the ever relevant history of nature writing aside for a moment, I was reading Peter Schjeldahl's review in The New Yorker of several new biographies of the Flemish art forger Hans Van Meegeren, when the key insight of the mediocre screen occured to me. It is this:

All of these films would have been far better if they were actually forgeries of themselves.

I don't pretend this would have been simple to achieve but the result of that little bit of extra effort would have been much more enjoyable London Film Festival. There would, for starters, have been a much more provocative attention to the relationship of the film and its audience. As Schjedahl perceptively comments, unaware of the full relevancy of his comments:

... superior forgeries typically secrete subliminally up-to-the-minute associations which pass, at first blush, as signs of "timeless" genius. The art historian Max Friedlander, who said, "Forgeries must be served hot," promulgated a forty year rule - four decades or so being how long it takes for the modern nuances of a forgery to date themselves as cliches of the period in which they were painted.(85) 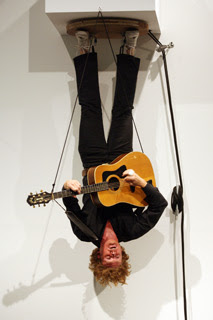 William Hunt, The Impotence Of Radicalism In The Face Of All These Extreme Positions (2005). Performance Still, 2007. Courtesy the artist.

Say it again: what all these films need is a heavy dose of self-forgery. As Schjedahl continues:

The spectre of forgery chills the receptiveness - the will to believe - without which the experience of art cannot occur. (86)

Not just cannot, I add, flicking through the tatered remnants of my festival programme, but must.

So there it is. A plea for more forged films and some notes towards a truly mediocre screen. I don't know how you feel - in itself something Mediocre Cinema never admits  - but with these critical tools I can face the cinematic mediocrities of the coming year both enthusiastic and emboldened, seeing through their fog to films - like Q, W and R - which are genuinely worthy of critical or any other kind of attention and response.

Images accompanying this post are not examples of a mediocre screen or of what more forged films would look like. They are, instead, performance stills from William Hunts recent exhibition at Witte de With in Rotterdam (13 Sep- 26 Oct 2008). They are included here both to document this event and, more specifically, because they seem to suggest what a research process would look like that sought to delineate mediocre film without become an example of it.