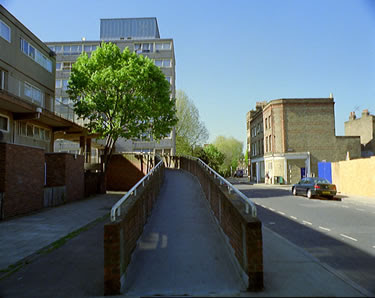 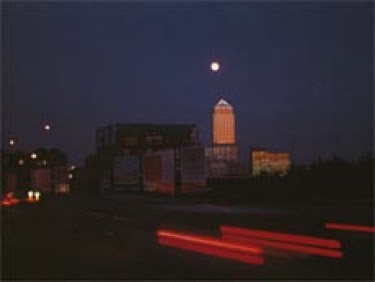 Transcentric is a thoughtful show filling two rooms of the Lethaby Gallery at Central St.Martin's. I caught it, unexpectedly, in a rain storm, and as this blog is supposed to be about responding to artists' film in various contexts - before you've seen it, afterwards, during, whilst both sleeping and awake - I thought I'd try and suss out some of what I gleaned from my impromptu visit.

Inparticular I wanted to focus on the film and video work that fills the second room. More specifically, the experience that comes from standing at the entrance. Because from the doorway one can see a range of work. On a tilted ramp on the floor there is Steven Ball's Land Gauge (2006), an aerial view moving over a landscape of urban scrub: grasses, trees, and paths that both express, replace, and comment upon the city they border.

Whilst Land Gauge is shot on video, it reminded me of Chris Welsby's Anemometer (1974), in which the wind propels the motor of a 16mm camera hanging from a tree, up the road from here  in Euston Square. If there wasn't such a direct process at work here, there still seemed to be a sense of hitch and delay in the image, as if powered by what it filmed or relying on some fragile, slightly delayed satellite connection.

Aerial views, too, can shift a physical landscape towards  becoming a map of itself, something borne out here by the method of display. Scrub, I thought, a little randomly, moving on, is nature at its most human.

Projected on the wall was Mark Lewis' Children's Games, Heygate Estate (2002), in which a camera moves along the walkways of a housing estate (the piece is also available online here). If there is a faltering quality to Ball's camera, Lewis is possessed of a smooth, ever-onward steadicam momentum that is a little disturbing, seeming somewhat to devour the urban landscape it moves through with its uncanny persistence.

It's appropriate that whilst not totally absent there are very few people in Lewis' film. The non-human rhythm begins to align the cameras rhythm more with the long lines of the Heygate estate buildings themselves, or the curving ramps along which it glides and turns without tiring or faltering. I even began to suspect there must be a sign somewhere in the film-makers head saying "No Games Allowed", the real architecture becoming some architects simulacrum of pleasure, a once lost vision of imagined games, without any of their rough, irregular physicality.

Two other pieces complete the rooms panoply of movements. On the ceiling is Anne Tallentire's Telling It (2006). Looped and nineteen minutes long, it contains large segments when the sky is entirely blue, which, if you start watching during a particularly long all-blue bit can make you wonder if there is anything being projected at all, or whether this is some digitally generated colour screen.

But then the top of a lamp post or some tree branches and leaves reveal this to be an upward glance, from a moving vehicle vehicle, at the sky. It's wonderful that such a straightforward device should also generate something that seems for long stretches the most extreme formalist investigation. Paul Sharits had nothing on the sky, was my conclusion here. 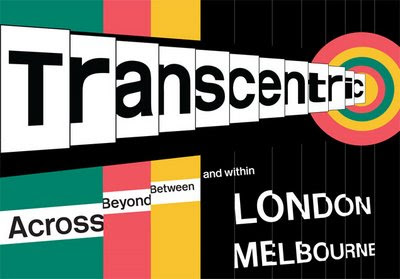 By this point I was enjoying each piece for its role in the room's whole as much as its individuality. As, too, the works feed into a larger project. Along with a first room of sound installations, light boxes, C Type prints, and silicone text - and some further projections in the window gallery in Charing Cross Road - TRANSCENTRIC is a collection of works by artists associated either with RMIT University in Melbourne, Australia or with London's University of the Arts. In the words of its own press release:

The works in the exhibition move across, beyond, between, and within city centres... concerned with phenomena that we might think of as 'urban', however this is interpreted not only in terms of spatial relationship, but also considers how the urban centre resonates with overlapping themes arising from social, environmental, geographical, political and other forces.

The room's final component was a wooden container, like an upturned skip open at one end and forming a small cinema looping six further works. Some offered variations of the movement on the surrounding walls, floors and ceiling, notably Tina Keane's A Train of Thought (2007). This wove a wide array of imagery, evoking evolutionary time spans, around a rectangular, train shaped strip of imagery, that sometimes was a train and other times became a shimmering field of different coloured moving light strips.

On a related theme, too, was William Raban's A13. Made in 1994, this was the oldest piece on display, its certain degree of canonicity emphasising how central its own concerns and techniques had become to projects such as TRANSCENTRIC. That said, other films on the loop were in no way constrained to Raban's own aesthetic territory, which combined elements of documentary with a range of post-production effects to more accurately depict and express its East London landscape. 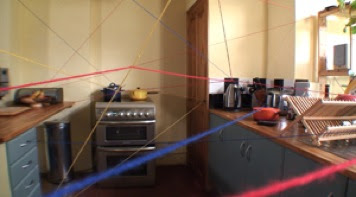 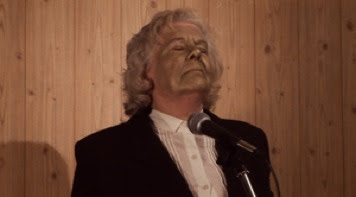 Most delightfully varying was Jennet Thomas' Return of the Black Tower (2007,) a bizarre and surreal fable in which a middle aged man and woman, smartly and conservatively dressed, faces covered in gold paint, were applauded for offering testimony concerning some strange, unspecified force that had transformed their own lives and the country as a whole, now full of support groups to explore the unnamed forces illusive presence.

Thomas' video, which extended and adapted themes of an earlier John Smith work, definitely embraced the theatrical in a way that the other pieces here didn't, working through staged, acted actions, and the aura of deliberate uncertainty surrounding them: its public meeting could have been a town council or an AA meeting or a bizarre soap opera, whilst the strange transforming powers were related to rotating black shapes; kitchens threaded with string; laying over the sofa in various still positions; rugs, cushions, and table settings.

These forces were a very English version of what's outside the space station window in Solaris. As for the concept of the urban, like all the pieces in this room, Return of the Black Tower posited a space both landscape and idea, other and uncanny, whose evidence, like the city itself, was as "natural" as the unavoidable fact of its construction.