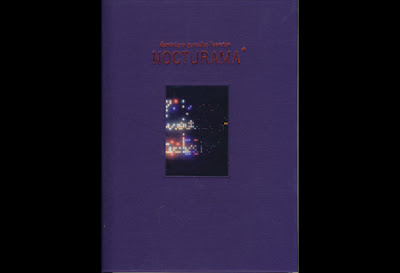 Retrospectives are a difficult format for certain varieties of contemporary artist. If your work is engaged with moment, site, and process then is it compatiable or even possible to have a traditional gathering of all your work together, in one institution at one time?  And what role should the accompanying catalogue play? For his retrospective at the Musee d'Art moderne de la ville in Paris, Philippe Pareno came up with one solution.  Whilst the exhibition was used as a site for current work, it was the catalogue, Alien Affection, which served the function of a chronological retrospective, as if in book form the combination of documentation and contemporaneity was possible.

Gonzalez-Foerster has collaborated with Pareno, and also had an exhibition  at the same institution, but, until recently, catching examples of her work at different shows in London - including Tate Modern's The World as Stage and recent series of experimental French cinema - I'd not found a publication that fulfilled the function of Alien Affection, giving an over view of her work at the same time as discovering the distinct identity it could take when thoughtfully presented in book form.

Thankfully, Nocturma*, the exquisite catalogue for her show at MUSAC, Leon, Spain (17th May- 7 September 2008) has now fulfilled that role. Although a concluding "pictorama" of thumbnail prints concludes the book with a survey of her work from 1977 to the present, the book is less a retrospective than Alien Affection. Perhaps indicating the difference in their respective practices, and the kind of responses they illicit, Nocturama* is best read as an exploration of traces, what lingers, as an exposition upon the after-image of an art practice.

Nocturama, that is, with a "*." Whilst such a symbol might normally be used to limit and frame the claims of a statement, here the accompanying back page note offers a coda for the work and also for the sense of the book form, expanding into suggestiveness, specificity and neologism as a form of world making:

Three essays highlight different aspects of DGF's work - again less interested in chronologies of DGF's career than in isolating a particular effect and moving around within that quality. So Ina Blom explores the idea of spectacle as derived from Debord, observing that DGF embraces spectacle but also finds in it a place for individual consciousness and bodily experience, drawing connections to, amongst others, Helio Oiticica's film and space explorations:

To enter the cinematic world of Gonzalez-Foerster is therefore above all to be invited to trace the open-ended temporal meandering or ambulation of a form [of] human existence that seems to be defined at the level of pure sensation - yet a form of sensation that is continually confused with the working of media machineries, with the ticking of the video time code, the deft segueing of one image into another, the dumb, staring, stillness of the camera. A story of the mind-machine, in other words: it might sound like a paranoid scenario, a meeting of old-school sci-fi imagination and radical media critique. The result, however, is less easily definable. For the main achievement of this work is precisely its ability to explore the surprising range and scope of this type of existence. In fact, the more it closes in on the idiosyncratic details of technical frameworks, the more it seems to bring out the type of open-ended, uncontrollable, non-formatted moments that might actually be the key product of this mediatic 'life of the senses.' (66-67)

A three way dialogue with Hans Ulrich Obrist and the novelist Enrique Vila-Matas is focussed largely around the opinions and work of Vila-Matas. The talk serves to illustrate the immersion of DGF's recent work in a certain canon of written literature that moves from Kafka, Borges and Robert Walser through to Bioy Cesares, Philip K.Dick - particularly the early books such as The Broken Bubble - Robbe-Grillet and Julien Gracq. As an installation shot reveals, DGF even places a wall text at the entrance to a video installation which reads:

having been a prisoner of literature for two years or more, captured in a triangle of enrique vila-matas, roberto bolano and w.g.sebald, three children of robert walser and j.l.borges, it is impossible for me to prsent anything else here than three short stories which can be seen or read in any order.

The dialogue extends to the careful construction of this catalogue, as too it includes the creation of spaces for reading, and bookcases made of books,  both works documented here. As, also, in a brief interview in the current issue of 032c magazine, DGF observes:

Places and contexts can be very different, but my approach remains similar in all cases: simply read books and walk around, or walk around and read books. Some places are more urban, some are intense, some have a great void, but there is always a potential narrative. A writer like W.G.Sebald is an interesting archtetype for the way many visual artists deal with cities, places, documents, memories and cultures. (30)

This Sebald template can often lead to a sense of history bordering on nostalgia, as in Tacita Deans portrait of Michael Hamburger, shown last year at London's Frith Street galllery - whereas for DGF it feeds into an obssession with hyper modern spaces. Not that there isn't a romantic quality to her own work, and the environments to which she is attracted. Blom, again, highlights this, stressing DGF's use of lamps, a romantic trope associated "with both mental projection and spatial creation" referencing both the artificially lit city and the workings of cinema projection.

The final contribution, by Penelope Curtis, in its own form places storytelling alongside critical thought - storytelling as critical thought - seeing this as the appropriate response to the suggestiveness of DGF's work, responding in kind to its invitation, with a combination of viewer and critic. In an astute commentary also of use in thinking through the role of the book in this kind of art practice, Curtis discusses DGF's miniaturized sculpture park and the effects of scale:

reduced scale-replica's of previous exhibits were assembled all together on one of the city's lawns. Like memories - as much right as wrong - which have faded a little with time, and in which things now no longer have their originally allotted site, but are re-assembled in the single space of our conscious, the sculptures all become a little more like each other, while retaining their essential difference. Now they are primarily a collection of sculptures - like a collection of glasses, or of egg-cups - which may vary individually, but which all still fall into the category of sculpture. (102) 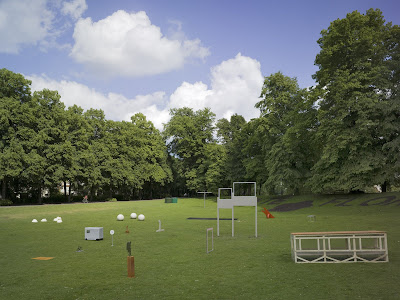 This produces a crisis of meaning which again seems apposite to the process whereby art works are reproduced in bookworks such as Nocturma*:

What would one do with a collection of a sculptures? Reduce it in scale in order to make it easier to store, or easier to compare, as with models of famous buildings from across the world? And if the sculptures are assembled together in one place, removed from their original sites, to what extent are they displaced and deprived of meaning? Do the sculptures make the site or the site the sculptures? (102)

And, more proactively, the retrospective book becoming a source of further ideas:

Models are provisional, a way of testing ideas, of suggesting what might be. Models which are never made refuse the viewer the possibility of actualisation, while offering him or her a wider range of possibilities. (103)

It occurs to me as I read this, thinking of an art finding its true retrospective in book form: A book, at its best, can return work to the state of the never-made. All three essays here are designed in different configurations, meaning nearly every page maintains a reciprocity of word and image, work and commentary. It's the images that are so powerful in this book, so auratic - and a long further essay could be written on how aura becomes a quality of these images. It's a tribute to the power of the books design and its contributers to articulate something of that aura, its qualities of atmosphere, spectacle, embodiment, technology, colour, and leisure. Or, as, once again, DGF's note puts it on the back cover, now with the whole book as what it comments upon: