TEXT AND SPACE: AFTER A REMARK BY DOMINIQUE GONZALEZ-FOERSTER 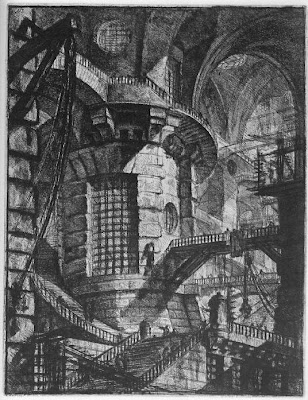 What follows is not a review but an exploration of the following quotation and the excitement it prompted in me:

The latest exhibition was a chance for me to write a kind of text in space, a visual text that would tell a story. That's why I called it Roman de Münster. And this brings me to another point, which I think also comes through in the interviews: the connection between space and text. I think there's a constant to and fro between the two: some texts produce space and some spaces produce text... I have the feeling that the connection between text and space is why I'm so fascinated by architecture and literature - and by moments when literature produces  architecture and vice versa. Maybe this is what fascinated Borges, too, because many of his texts produce incredible spaces.(175)

This quote from Dominique Gonzalez-Foerster comes from The Conservation Series 12, the latest volume of Hans Ulrich Obrist's ongoing interview project. Gonzalez-Foerster wonders aloud "It would be interesting to see whether we could produce a kind of space, or relation to space, with this book." But what kind of space would this be?

What distinguishes this volume from most of the others in the series - and connects it to the simultaneously published volume on DGF's friend and collaborator Philippe Parreno - is the way the collaborative nature of DGF's own art-making informs a book where dialogues become trialogues, and where - particularly in encounters with the novelists Enrique Vila-Matas and Edgardo Cozarinsky - she becomes interlocuter and participant rather than being simply subject. In another variation on the interview paradigm, a conversation with Nicolas Ghesquière becomes a chance for the artist and fashion designer to reflect on their own ongoing collaboration with Ghesquière's Balenciaga fashion house. But what kind of space is all this producing?

A kind of text in space, a visual text that would tell a story...

A constant to and fro between the two: some texts produce space and some spaces produce text...

The trialogue, or the changing relationship of interview and subject, can be understood as the moment where a space thought to be clearly perceived by the eye, whose proportions suggest ways of relating that the experience of the space does not surprise or upturn, begins to become something stranger. In the history of art we could think of Piranessi, or - a practice much closer to DGF's own - the installations of Monika Sosnowska, whose work, as Adam Budak observes, in the catalogue for her show at Kuntsmuseum Liechtenstein, is:

Oscillating between non-regularity and deformation, dysfunction and architectural abuse... [it] challenges the formal aspects and emotional intensity of spaces and spatial environments. Multiplying and proliferating spaces, her work performs a struggle with a certain precisely defined system of architecture (its geometric variables, but also social objectives and site conditions).

Possibly perceived as an attempt to escape architecture and its imprisonment in function and functionality, her work employs an extended vocabulary of spatial surgeries that manly belong to a catalogue of architectural and constructive misfortunes: a failure, a trap, a parasite, a ruin...

[The installation work Loop] develops yet another set of spatial treatments: a cut through, a negative, a radical compression of available space, a particular act of reversal. Loop, as a flexible and controlled space, with its deconstructive drive and rare processing of memory, marks an ambitious attempt to confront modernist universalized patterns and to escape dimensions. It is a radical act of constructing a subjective space, a sensual, partly oneiric, mental shell of contemplation and desire. Welcome to a seance of phenomenological spatio-therapy. (33) 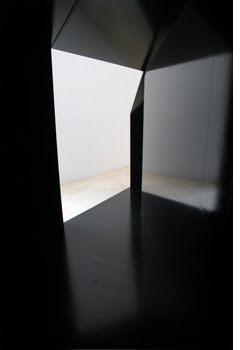 Budak's essay elucidates Sosnowska's work - and this spatial condition - by referencing a range of writers, including Perec, Borges, Calvino, and Robbe-Grillet. But how precisely do texts convey different senses of space?

In texts we can find equivalents for such disruptions on the level of the book, the page, the sentence or the word, and in all states in-between. Texts whose reading requires labyrinthine movements of the eye, new negotiations with the space of page and book. Although long out of print, Richard Kostelanetz's stunning anthology Essaying Essays: Alternative Forms of Exposition (1975) laid an attempted groundwork for a tradition of such writing, but the connections it makes between writers working in visual art, criticism, performance, poetry, and image-text are rarely collected together.

Indeed, understanding textual-space as effecting the visual layout of the typography is a marginal tradition. More usually - and this is also the case in the writers DGF references - we have texts for whom fantastic architectures are more a matter of their meaning and ideas than their page design or grammar.

All of which produces many questions:

How labyrynthine can a conventionally constructed text become? How much does the meaning have to develop in visual form?

Are there pressures exerted upon content by form, an evolution towards a visually appropriate design? Or is the space of the text something suggested rather than embodied by the text itself, its fantastic architectures developed and pronounced in varying ways by each reader?

It's tempting to stress a continual smooth transition and play between spaces producing text and text producing spaces. But there are also elements of each which resist translation, and where, to maintain a sense of space and text, we have to posit both a radical similarity and a difference. Rather than negating our subject, however, this is where the relationship of space and text can be at its most fruitful. Hollis Frampton's film Poetic Justice (1971), comprises shots of each page of a handwritten shooting script, placed on a table between a cup of tea and a pot plant. As Frampton observed:

Realizing the scenario would destroy its crucial ambiguities... "Outside the window is an inverted saucepan", well, where is that saucepan? In the space outside the window. Is it on the sill? Is it a hundred yards away? The difference between the spatial close-up and the psychological close-up is easy to sustain as a tension in language because the declarative sentence itself separates the figure from the ground. It's not so easy to sustain an ambiguity of that type in film. If you're actually photographing, you can't have "six or seven zebras." (Screen Writings: Scripts and Texts by Independent Filmmakers ed.Scott MacDonald, 51)

Indeed, the particular entwining of space and text that Frampton suggests, can also be related to DGF's own sense of architecture and space, expressed elsewhere in The Conversation Series 12 as a desire for spaces characterized by potential, possibility and by replacement of distinct subject-object relations with a desire for enveloping:

...the relation to an object or a thing is all too obvious a relationship. I prefer to be in a relationship with something that's around me, but which I am, at the same time, myself around. I'd rather explore that kind of complex situation. There are many examples of enveloping works that allow for - at the same time and at certain moments - being outside of them. There's an entire history of works like that... architecture is just that: you go out, you go in, and so on. That's the particular quality I'm after.

For me, the exhibition becomes fossilized when a series of objects are lit up like so many dots.  Whereas it is freed when the idea of moving through the exhibition becomes a decisive factor: when different sensorial levels are called upon; when we don't remain stuck on the optic, scopic impulse; and where our actions are conditioned by what we hear. This synesthesic dimension is fundamental. If we remain purely scopic... we lose so many dimensions. (38)