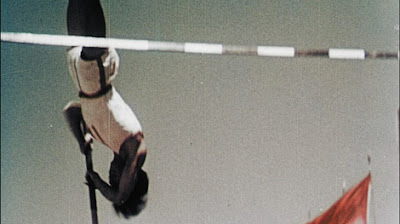 With images of the opening and closing ceremony establishing China's preiminence in global spectacle, it was interesting to see two Olympic-themed moving image works at galleries in London. How should artists relate to the Olympic spectacle, particularly one that, with Herzog and de Meuron's birds-nest stadium, is itself claiming the status and attention of an art work? Susan pui san lok at BFI Southbank and Sarah Morris at White Cube Picadilly present responses that used a similarity of materials to very different ends.

Both had produced their work with a strong sense of the connection between different Olympics, and the broader global currents that could be revealed by such a connection. Susan pui san lok focussed on the connections of Beijing and London 2012, whilst Morris' 1972 responded to Beijing - where she is filming her next film - by focussing on the terrorist attacks of Munich 1972, organizing her film around an interview with Georg Siber, head psychologist of the Olympic Police, who uses the film to stress how the taking hostage of members of the Israeli Olympic Team by the Black September Terror Group mirrored exactly the scenarios Siber had prepared prior to the games.

Both inadvertently propose an Olympic Aesthetic that combines archive material and newly filmed footage, working consciously within codes and styles of documentary, whilst making shifts and decisions that transform this frame. Thus Susan pui san lok orchestrates her footage over five large screens, deliberately creating a slow, somewhat clinical and clunky, gap-filled rhythm, as if even at this remove the shots of opening ceremonies and performing athletes needed to be further distanced. Morris' decisions were more subtle. At first, I wondered if there were any aesthetic reasons for broadcasting 1972 as a wall-sized installation rather than a BBC4 documentary, but was won round by its subtle disorientations. 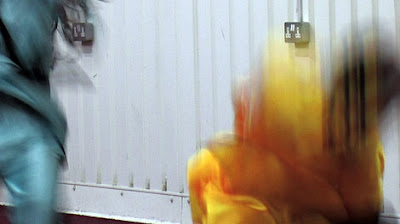 So what were the specifics of these disorientations? In Faster, Higher there were sequences of numerous opening ceremonies, balloons and doves let into the air. The quality of footage suggested its date, its contents suggested its geography, as also the similarities between footage and screens testified to the Olympics own symbolic and real brand of globalism. If the five screen structure highlighted the way Olympics are constructed as spectacles in media images, then the piece connected these to its own machinations, as the particular codes of color bars and video graphic countdowns appeared at different times on various screens. Amongst the archive footage were images of climbers ascending Everest. The Olympics, pui san lok suggests, are an event worth paying careful attention to for the way they reflect, embody, prompt and distill the world in which they take place, but the artist and viewer needs both distance and caution to maintain a critical perspective.

Morris' 1972 moved from panoramic shots of the Munich stadium and Olympic village to interviews with Siger, in his car and his office. Siger was filmed in very shallow depth of field, so that a statue of a long nosed Pinocchio could shimmer somewhat out of focus at the side of the image. It was a curious image, straddling a spectrum of emotion from inconsequential to the unconscious and traumatic. Once noticed it seems like it must be staged, and yet it seems to be too crude and obvious to be anything other than actuality: a prop that happened to be in the room. It thus functions curiously, both as environmental accident and as an eruption of the unconscious and traumatic.

1972 is also characterized by a prevalence of doubling, and not just between Beijing and Munich. The Olympic stadium is constantly juxtaposed with its architectural model, once a utopian vision of events to come but now a historical record of a catastrophe it fails to mention. Titles and credits are also doubled in red and white as if there are two films to be seen here, two identically named crews working towards different ends by making strangely identical films. Put differently: this is a rewarding film but one that seems uncertain about its own identity and location. If Morris' paintings, also on show here, expand to fill a wall in response to the same theme, then what does the focus and restraint here say about the role of film in her practice?

If there is an artists' Olympic aesthetic in these two pieces, then it of course has the films of Leni Riefenstahl as its most obvious and problematic precurser. As these artists create ways of dispersing the Olympic event, showing its repetitions, its before and after, the constructed complex of its images and rituals, so Riefensteil can be seen to prompt a series of worrying questions about whether these decisions of the artists are creating an alternative space, or a more powerful depiction of the Olympic events dominant appearances and messages.