STOCKHAUSEN, SMITHSON AND THE UNDERGROUND CINEMA 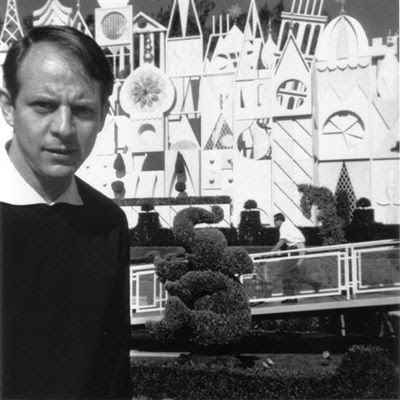 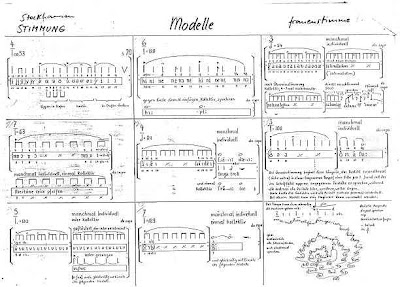 Photo of Stockhausen by Betty Freeman.

Thinking about Robert Smithson's underground cinema, I was also reading Jonathan Cott's Stockhausen: Conversations with the Composer, following the recent Stockhausen Day on August 2nd at the London Prom's. What was most striking about the different pieces performed was how Stockhausen's explorations of particular aspects of sound - say, directionality as important a constituent of music as tone or melody -  led to the creation of particular theatrical forms and experiences.

So, for example, Stimmung (1968) finds six performers singing overtones while sat cross-legged on cushions, whilst Kontakte (1959-60) sees a pianist and a percussionist in a tense, unequal and somewhat macho contest with a sound projection. The evening opened and closed with two performances of Gruppen (1955-57), comprising three separate orchestras, each with their own conductor. To stand in a narrow gangway between two of the orchestras was to experience sound not only through its directionality, but also through a heightened connection to the physical acts and gestures of the performers only an arms reach away.

Cott's book of interviews offers much elucidation of Stockhausen's interest in a music responsive to space. Most striking, in the context of underground cinema, however, is Stockhausen's "underground concert hall", as realised in a concert at the caves of Jeita, Lebanon in 1969. As Stockhausen narrates to Cott:

S: The lower caves were discovered at the end of the last century. And only ten years ago a man named Sami Karkabe came upon the upper cave which is more than a mile long and filled with stalagmites and stalactites. Three years ago they built a 100-yard-long tunnel connecting the outside of the cave to the inside. There's a remnant of a human bone encased in stones at the entrance - and fossils, too, - about 40 million years in the layers of the mountain!

Is this the underground film-maker? Is this the movie maker as spelunker, the intrepid figure in the Sports Illustrated photo appended to Smithson's Cinema Cavern proposal? Did Smithson know what Stockhausen was up to? 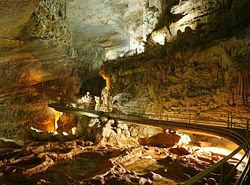 We performed From the Seven Days and several versions of Spiral on the first night. There were 180 small speakers hidden in the rocks, and as the audience walked through the cave, we very softly played Stimmung over the speakers. Everyone became silent - it was like entering the womb of existence; or, as I said to someone there, it was as if there were a fantastic hole in the stomach of God.

Q:Is film projected through a fantastic hole in the stomach of God? A: Some films are and some films aren't.

It took about twenty minutes to walk to the inner section which opened up like a grand cathedral; a Lebanese architect designed a concrete snakelike path between the stalagmites and stalactites. And you walked up several staircases until you arrived at the upper dome, which is where we made the music. Everyone sat against the walls on this path - there was an audience of about twelve hundred persons each night. The musicians were somehow in the centre on a circular platform about 150 yards away from some of the listeners. And the speakers, as I said, circled us in the rock walls about 80 yards distance from the musicians.

If Smithson had built the cavern cinema, there would have been a point where the rigidity of his projector and screen would have troubled him, and he would have returned to the surface for the sole purpose of taking delivery of a shipment of mirrors.

We performed Stimmung, Hymnen, Telemusik, and Kurzwellen. And we had a hard time getting shortwaves there; we had to lay a mile-long cable through the cave in order to reach the outside. What was fantastic was that the reverberation time for a loud sound was seven to eight seconds, but when the next sound occurred, the reverberation time came so much later that it didn't destroy the music, though each sound had a long tail, so to speak.

I had a control desk which enabled me to move the sounds which were flying through like prehistoric dragons - I could make a sound cross several hundred yards from left to right. We had spotlights on the musicians - the rest of the cave was dark - and when you looked down from the circular platform about a hundred yards deep you could see through a hole an underground river which was lit by several projection lights. The caves made the music sound both prehistoric and also like something out of science fiction. 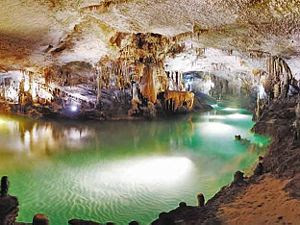 André Masson and Max Ernst came to the concerts. On the first night I shouted their names, and the musicians answered and started transforming these sounds: Ma-ax. He later told me that at that moment it seemed as if he had died and was hearing his name on entering a new world.

C: It sounds like Charon taking you across the river Styx.

How can we create this sense of calling between images? How can we give these images the qualities of names, but names broken into syllables, become calls from the dead?

S: Yes, it was like that. I was shivering on the outside and hot inside. The audience was transported. People said that it sounded like the music from Atlantis or of a distant star. They looked at the musicians as if they were ghosts in some supraconscious dream... (191-192)

The ghosts are former stars of silent cinema. Fearing for their fame they ask: what images will never be visible here?