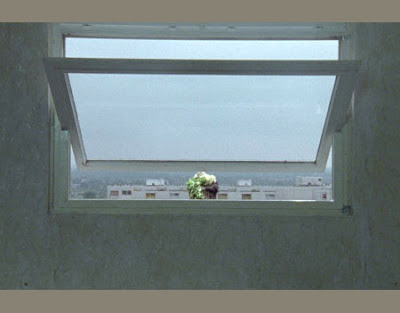 One of the more surprising appearances on the London gallery talks circuit was Michael Fried lecturing at the Photographers Gallery on artists' film. Fried, of course, as his own introduction to his lecture made clear, formed his critical faculties as an "apprentice" to Clement Greenberg, and has lived for forty years with the infamy surrounding his 1967 essay "Art and Objecthood", in which he lambasted minimalism for - unlike the work of friends such as Anthony Caro and Frank Stella - shifting the focus from the qualities of the work itself to the whole circumstances of its positioning and the event.

Shortly after the essay, Fried stopped writing art criticism and became an academic art historian, but the themes remained much the same. In Diderot, as Fried explained at the Photographers Gallery on Friday night, he found a guide who theorised a quality of absorption in the paintings of David, and who also had a horror of a lesser quality - where subjects were pretending or performing solely for the painter - that equated to Fried's theatricality. A trilogy of art historical tomes followed that unfolded this fascination, and also the shift in focus to Manet, where subjects did look directly at the painter - and at the viewer - but  still somehow maintained their absorptive quality or, as Fried called it, "facedness."

How Fried got from this to a lecture on Long Sorrow, a 2005 film by Anri Sala, was one element of a dense, fascinating talk delivered at considerable speed. One starting point, back in the 1980's, was Fried's developing interest in the photography of Jeff Wall, many of whose works, he observed, seemed also to engage with this quality of absorption. Fried joked he had the "academic's fantasy" that Wall was reading his books, before discovering in an interview that Wall actually did (Fried happily read aloud the quote where Wall confirmed academic fantasy as reality). Fried reciprocated the interest, becoming fascinated by Wall's portraits in which absorption was also about the re-creation or representation of a moment so that "portrait" became only one of the many genres that the picture participated in.

This unfolded into a wider critical engagement with photography, and Fried's new book Why Photography Matters As Art As Never As Before, ostensibly the reason for this talk although it was scarcely mentioned. Instead, Fried screened Sala's Long Sorrow, in which, to a sound track of free jazz, a camera slowly zooms in on an open window, which appears to be propped open by a strange object. As the camera closes in on the window - evocative, Fried noted, of Michael Snow's Wavelength - the object by the window is revealed to be a human head.

The remainder of the film - always working through fragments - comprised sequences of extreme close ups of the figure's mouth and eyes, slowly revealing a figure - musician Jemeel Moondoc - stood improvising on the saxophone on a ledge fixed to the outside of a high rise block of flats. The constantly shifting camera also takes various outside perspectives, of the flats themselves and the playing figure on the ledge. In the films conclusion, the head of saxophonist Jemeel Moondoc  appears to float and drift in space. 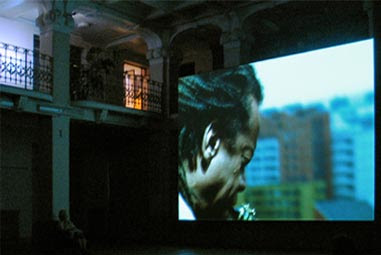 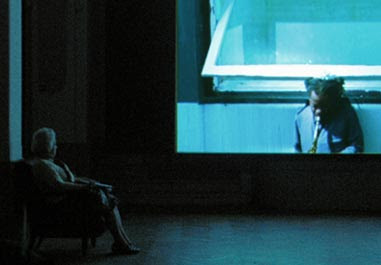 Fried followed the screening by offering a description of the work, lamenting that such a simple statement of what was seen was rarely practiced in art critical writing about video works. He rooted his own engagement with the work to a particular experience - walking into the Marion Goodman gallery in New York and immediately being absorbed by what he saw. He offered reasons for his fascination, trying to explain why the camera's incessant movement, forever making you aware of the film makers choices, could enhance rather than rupture the state of absorption and empathy. In part, Fried related it to a quality of present-ness - defined back in "Art and Objecthood" - shared by both film-maker and musician in what was a deliberately stressful and literally on the edge situation. He was fascinated by Sala's remark that he was "filming the intention to make music."

All of which made for a fascinating, if slightly odd, talk. One key to this oddness was a passing joke when Fried observed that he had no pre-existing theoretical model to apply to art but if he did he would write for October. It was a reminder that for all the seeming dogmatic puritanism of his early essays, Fried's notion of absorption is actually one that at its core is a profoundly uncertain and even rather mystical position.

This is revealed in the unquantifiable experience of an individual standing in front of a painting by David or Chardin, and it is also there in terms of any individuals broader array of  cultural encounters, so Fried could wander in off the street into Marion Goodman, have an absorption, as it were, and begin lecturing and writing on a medium for which he had previously had no time, with a mix of high erudition and the enthusiasm and naivete of the beginner. 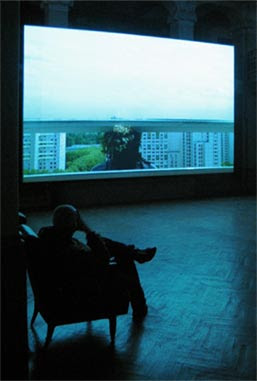 Fried didn't show any signs of wanting to pick a fight, but if he did want to get more involved in contemporary art, his ideas would likely be as challenging and annoying to certain contemporary ideas as they were to Robert Morris and Carl Andre. On this London trip Fried will also lecture on Douglas Gordon at the ICA and it's hard to imagine Fried's Gordon will have much in common with the Gordon celebrated by, say, Nicholas Bourriaud. Indeed, it's hard not to see participatory and relational aesthetics as a coming to life of Fried's worst nightmares, its chain of relationships and encounters a dilution of the all-important undiluted encounter with the work itself.

Not that Fried had lost any of his 1960's conviction that a role of criticism is to say clearly what is good art, what is bad, and why. At the Photographer's Gallery he expressed a vehement contempt for Bill Viola, I guess because in Viola the qualities of absorption become too articulate, too self-aware, which for Fried would be a sure sign of the fall into theatricality. He also said, in answer to an audience question, that he was going back to look at work by Snow and Warhol, recognising the connection to Sala or Douglas Gordon, but not sure yet what it was. It was surprising, he said of his re-engagement with Warhol, who must have once appeared to be the evil embodiment of theatricality.

The lingering sense of this lecture was how, as a critic born in 1939, Fried seems to have ended up in an open and curious position, writing about new work and young artists, whilst still pursuing the elusive filagrees of ideas that have obsessed him for longer than those artists have been alive.