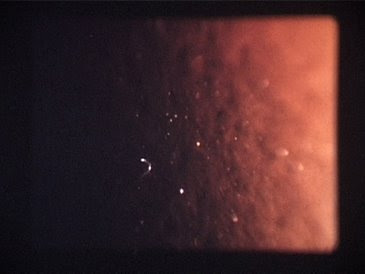 The second of the Peter Gidal's Park Nights, in the Frank Gehry designed summer pavilion at the Serpentine Gallery, focussed on the theme of Aleatory Colour: Perception/ Material/ Memory. As Gidal remarked in his introduction he would have liked "and back" to have been added to the end of the title. Or, perhaps, the three words could have been printed on top of each other for, as Gidal explained, he had been interested in films where perception, material and memory were at work simultaneously. It's an argument, incidentally, that he also unfolds powerfully in his recent One Work monograph on Warhol's Blow-Job.

The selected work here was a combination of work by Gidal's long time colleague and friend, Malcolm Le Grice,  Simon Payne, and two younger film makers, Samantha Rebello and Jennifer Nightingale, who he had not previously met, and whose work, he explained, he had come to through a network including the critic AL Rees and the London-based No.w.here group. Such work also, of course, fed into and out of the Serpentine's current Gerhard Richter 4900 Colours: Version II exhibition. The open plan of Gehry's pavillion meant the films could be weighed against the Richter's lit in the gallery windows, as, too, in the other direction, a bright moon and a stream of headlights on the park road provided their own colour play. 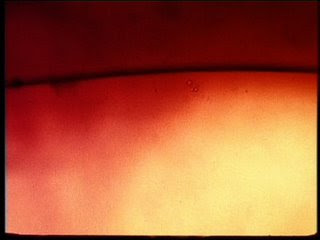 A little schematic, maybe, but the films arranged themselves into two distinct categories in my mind. In one group there was Simon Payne's Colour Bars and Thirds and Malcolm Le Grice Matrix. These bore most direct comparison to the coloured squares of the Richter paintings, setting them - in Payne's case inparticular - in motion, with a sense of Josef Albers and the test card as equally important precursers. Both works involved relationships that built from simple to complex through changes of speed and quantity of colours and shapes.

Thinking of Gidal's Perception/Material/Memory triad this was work which seemed keenest on the first, neutralising and flattening the later two categories to accentuate the former. I was also unsure whether such films unfolded pre-set or mathematical patterns or whether the increasing blur of colours acted out an increasing frustration, a sense of being involved in an impossible project,  working increasingly complex arrangements to an ever more illusory end. 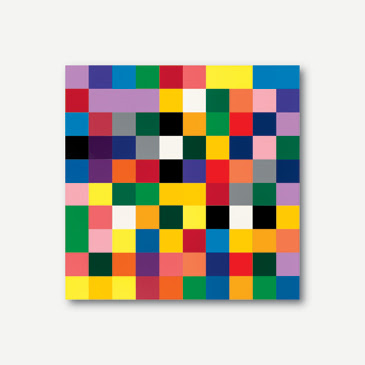 These works were noticeably different to those of  Samantha Rebello and Jennifer Nightingale, who comprised my second category. Here the image was often mysterious, and sometimes did comprise an area of single colour, but what was perceived almost always appeared in some way organic, with a texture suggesting

it is some kind of natural landscape, and a perturbing oddness that often suggested trauma. In Rebello's Surface of Residual Matter this was also expressed in the soundtrack, which weaved between the sounds of a pneumatic drill and something that might be a natural soundscape, before removing that as a binary and just existing in its own variousness.

In this film - as also in Jennifer Nightingale's Colour Pinhole Film (Cathedral) - such images had a distinct sense of something being filmed, but were deliberately ambivalent in their objectness, and in their precise manner of inhabiting space. This made them susceptible to a kind of conjoining with the material of the film itself, sometimes overtly in scratches or flare ups of the film stock, but also with the way such images seemed to depict a certain process of evolution towards representation. Theirs was a highly sensory and in many ways ecological materiality - although perhaps a little too so in the evenings conclusion when the projector broke down and Nightingale's image warped and exploded on the screen. 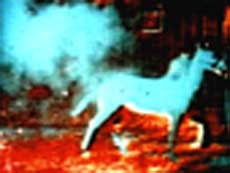 Perhaps the work of Le Grice can offer some frame for thinking through these two categories. The evening also included Berlin Horse and Lecture at the Academy. The first, of course, combines two strips of film, one newsreel footage and the other shot by the film maker, of a horse being excercised  and - in the other - lead from a burning stable.  These images are subject to a number of manipulations, including repetition, playing the film backwards, switching to negative, and use of various colours.

Lecture, meanwhile, filmed a Peter Gidal talk in which Gidal himself was also subject to manipulations: multiplied into two or three lecturing Gidal's, his body and words slowed, played over each other, slurred and deepened. The result was both an affectionate portrait of a friend and an assertion of film as a supreme and assertive form of philosophy - finding through the manipulations of editing an expression of the emotions and ideas that in Gidal's original presentation were more confined, deliberately and anxiously quested for rather than obtained.

So filmic confidence is one way these two kinds of work become joined, one way in which the Perception/ Material/ Memory triad is held together. Another concerns the understanding of colour, particularly as expressed in Le Grice's 1995 essay Colour Abstraction - Painting - Film - Video - Digital Media (reprinted in Experimental Cinema in the Digital Age). Perhaps we can think of the experience of colour as a way of negotiating between these different media - and the different styles of film on display here. 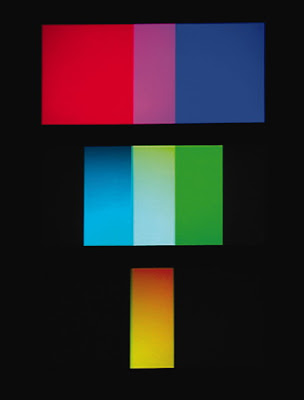 Le Grice begins by distinguishing between the experience of colour and subjective experience of that same colour. The former - more specifically, an experience of "sensations of different wavelengths of light" - is common to more than one individual, whilst the later is not:

Two people shown the same blue would almost certainly both be able to match this with a similar blue as well as agreeing its blueness verbally... However, this consistency of matching cannot prove that we share the same subjective experience of colour.(260)

This formulation is both a phenomenological grounding for the Perception/Material/Memory triad, and a tension which informs both kinds of films at this screening. Le Grice concludes his essay by outlining how all this translates into the experience of films like those show here:

The first stage in the abstraction of a quality from an object-whole is to de-specifiy meaning, shifting the attention to the phenomenological experience of the quality abstracted. In the second stage, when colour has become abstracted, by losing its specific object association but retaining an emotiveness in unspecific association, it is able to provide us with one of those strong phenomenological stimuli, like musical sound, capable of opening new imaginative space.

And like sound, when it is separated from the utilitarian purpose to become music, it becomes available, as the basis for structured abstract experience. This more general similarity rather than any one-to-one correspondence is colour's main analogy with music. Music and colour share the capacity to create the situation where experience is able to precede interpretation. We return, if momentarily, to the pre-verbal, regressive, and ecstatic - we suspend interpretation in favour of the experience itself. (271)

Reading this, I haven't lost my sense of the fundamental distinctiveness of the two types of films outlined above. There does seem a distinct claim to some concept of the  organic as it appears in Rebello and Nightingale, in contrast to the geometric colour use of Payne and Le Grice's Matrix. But Le Grice suggests the power of the colour itself to set in process a response in which such categories become overwhelmed.