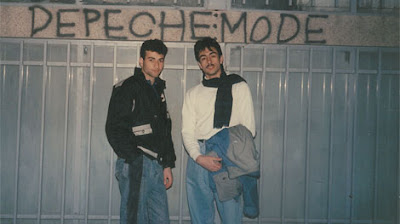 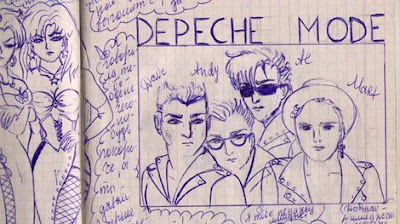 Jeremy Deller and Nicholas Abrahams film begins on truly original cinematic ground, exploring the role of Basildon in the global imaginary. A small, comfortable town near London with small houses seems to be the Russian view, whilst the perspective from California is more festive as Basildon is imagined as an idyllic place of street parties and celebrations.

The reason for these inventions of Basildon is not the global reach of the New Town movement, or an attempt to position Essex alongside Cuba as a case study of the altermodern, but the success of the towns most famous export, Depeche Mode. Deller and Abraham's film is a study of Depeche Mode fans around the world, they way they express their love of the band and its music, and how the band continues to feed into a truly dazzling array of socio-political contexts.

The core of the film is an archeology of the cold war through - to adopt the phrase of one Russian fan - a Depechist outlook. Inparticular, Deller focusses on fans in Russian, Rumania and East Germany, combining those for whom the band accompanied the fall of the Berlin Wall, Ceacescu amd Perestroika, with a more recent generation of equally intense teenage Depeche fans in Moscow and elsewhere. In  California meanwhile, the film records two teenagers in Pasadena, six days old when the band performed at the Pasadena Rosebowl, as recorded in the film 101. There's also a brass band that performs a choreographed Personal Jesus in an empty American Football stadium.

But the film also has a more global reach, showing Depeche Mode songs performed by church choirs in Sao Paulo, Brazil; a collector of 500 t-shirts in New York; and a proud owner of a few illegal bootleg cassettes in Iran. There are also two stories from England - a church in Cambridge that plays Depeche Mode to accompany communion - and a homeless man who had a Mode tape when living rough tape and asserts his main fear was not hunger but running out of batteries. Although one Russian fan remarks fiercely that prophets are never understand in their own country and are often forced into exile.

As an artist, Deller is perhaps best known for The Battle of Orgreave, in which coal miners reenact their struggles with police during the miners strike in 1984-5, as well as, most recently, the Folk Archive. This film - whose title references the Berlin wall - relates to both projects, although the element of re-creation needs no artist's intervention for, as the film catalogues, Depeche Mode fans have already developed an array of forms for the film to document: performing songs, making videos, dressing up in costumes, wearing black nail polish, creating shrines of photos and album covers, making bead portraits of the band, and, in one instance,  creating a multi-exercise book graphic novel of what it would be like to be married to a member of the band. 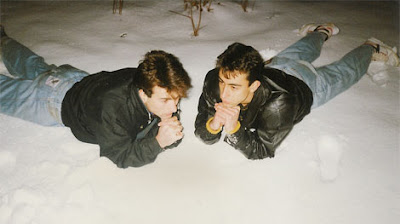 Films of people with all consuming obsessions and hobbies are a staple of TV documentary - and almost a distinct category of artists' film in their own right. Eccentricity is highly useful for structuring a film, but it can seem exploitative or just having a good laugh at others foibles, or just too easy. That never becomes a problem here, perhaps because all the contributers are highly articulate about the bands relevance - be it to the issues faced as a teenager in California, to social realities in East Germany, Russia and Rumania before the revolution and the fall of the Berlin Wall, or in the maintenance of their friendships. It's also because there's no sense of pity for the people filmed here:  everyone seems to have lives made much happier and fuller by their Depeche Mode obsession.

Thinking anthropologically about what Deller reveals, one element that emerges is the personal intensity of relationship fans develop out  of very little. There's a man in Moscow, without paper when autograph hunting, whose shirt is signed and it is, we are told, the happiest moment of his life. An American teenager replays the moment she was blown a kiss from the stage. A riot in Los Angeles means that, despite 15,000 people having camped outside a record shop, less than 50 actually got in to have anything signed. But this parcity of actually encounter prompts no resentment. It feeds into a greater sense of personal intimacy, the film proposing a contemporary subjectivity that combines fantasy, intimacy, and invention.

For film-makers the notion of fan as a mode of response is also worth appropriating. Here it is a complex position that involves mimicry and re-creation, varying in emotional intensity and purpose from having a good time, to a "hobby" as one contributer calls it - "other people go to the gym. Our hobby is Depeche Mode" - and a religion, all with a high degree of self-awareness. Although not a part of the film, there's a lot of contemporary art tropes at work here, but with none of the self-regard, and where the political efficacy also comes from a creativity located firmly within a circle of friends. 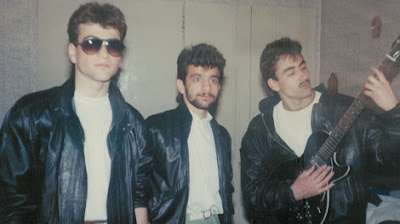 Deller observes a fairly conventional documentary style throughout. The band themselves - whilst all pervasive in one sense are also - apart from a few clips of concerts - absent. Even gathered in Bucharest on the eve of a gig the film makers show the before and the after rather than the gig itself, which is appropriate. This film is about the astonishing usefulness of Depeche Mode in articulating and helping people create themselves and some sense of culture, be it in Cambridge, Bucharest, Moscow, or Sao Paulo. Which is partly about waving arms above their head in imitation of the bands singer, David Gahan, but is also something infinitely richer.

I've avoided mentioning artists' film, or cinema films made by artists, which will be a recurring theme of this years London Film Festival, most noticeably around Steve McQueen's Hunger. But watching The Posters Come From The Walls it's hard to avoid reflecting that the contagious relevance and adaptability of Depeche Mode's music, the variety of responses it provokes, is a challenge to any artistic work with claims to be participatory and politically engaged.

The Posters Come From The Walls is screening on Tuesday 21st  October, 18.30 in NFT 1 at BFI Southbank. See the festival website for full details. The film was a late addition to this years program and is not included in the printed program.