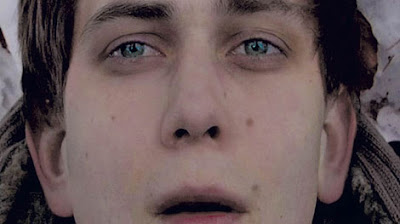 SPOILER WARNING! THIS REVIEW WILL NOT ONLY TELL YOU WHAT HAPPENS IN THIS FILM BUT ALSO WHAT IT MEANS!

A young man chops down a tree  in the snow filled wood of a remote, unnamed valley, surrounded by mountains constantly disappearing in mist. At first it is not clear what he is doing. We don't see the whole picture: there is the sickening thud of his axe, the exertion of his contorted face, which both seem most likely to be  violence against a person or an animal. After the tree falls, a horse drags logs through the wood. The man lies in the snow having a fit. At first the camera shares his jerks and spasms, but then it is still, watching him, as the saliva foams out from the corners of his mouth.

These opening shots of Un Lac (The Lake) - the third feature film by French director Grandrieux - set the emotional and formal tone for what follows. Soon the man is comforted by his sister, held in her arms in a house where they are almost dissolved in its darkness, with hands, hair, and face becoming indistinguishable from one another as they teeter on boundaries of familial affection and incestuous desire.  When a stranger appears in this unnamed, wilderness landscape, the key elements are all in place. For the films eighty seven minutes there's a tension between the unfolding of this folk tale-like narrative, and submersion in a sensuous world, of hair, hands, horses, snow and darkness that is largely without individuation, speech or time.

This, then, is not a film to watch for narrative surprise. It has a clear and inevitable structure. Jurgen is always going to have an affair with Hege from the moment he arrives, and Alexi is always going to find this more than a little problematic, as it brings to an end their animal-like absorption into each other and the landscape. Grandrieux's success is to enact this without the whole thing becoming completely ridiculous. That said, it's a precarious balance: there were moments when I found myself imagining this was actually a film about some back to nature lifestyle choice by a group of French speaking Russian fashion models, who'd discovered a remote snowy Siberian wilderness where it was still possible to get a fantastic hair cut. 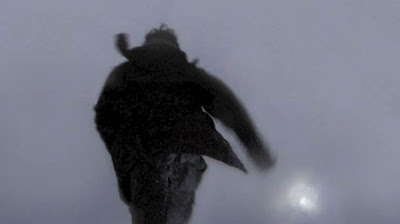 Such thoughts are part of the films plan! The mountains and valley are a curious no-place, and the actors too must not look like Grandrieux is portraying the peasantry. Their glamour is like the sublime and mist covered mountains and forests - vital to the films atmosphere, but never allowed to function as spectacles, always absorbed in a claustrophobic fusion of vision and thought. Similarly, the sounds of breathing, or silent shots of an open mouth, take priority over language and conversation, moments unfolding which possess a quietly dazzling constellation of details that ricochet unobtrusively throughout the film.

Take the scene when Jurgen first appears at the side of the lake where Alexi is chopping wood. Jurgen introduces himself by name, whilst Alexi can only say "I come here to chop wood." The first time we hear his name is when - startled at Jurgen and Hege kissing - Alexi disappears off into the night snow. There follows a night scene where, calling his name, Jurgen searches for him with searchlights. But it is appropriate that he is only found when daylight reveals his body - this is not a film where revelation comes as bursts of light.  In contrast, most characters at some point adopt a curious facial expression that makes them look as if they are blind.

Key to all this is the idea and experience of family. The film's initial emotional rush comes from Alexi and Hege and their confused desire for one another. When emotional developments happen for one member then it effects others as well:  Jurgen's arrival, for example, also seems to usher the mother and younger brother Johannes into the story. Jurgen and Hege having sex also seems to lead to the  reappearance of Hege and Alexi's father. Often these linkages are through scenes where characters examine each others faces or wash each others hands, the close ups of eyes, cheeks or hair initially preventing any definite identification of individuals.

Grandrieux's sense of this would seem to be that it is not cruel. His family is in many ways a tender, loving world, even as the dangerous limitations to its sense of uninidividuated being are always apparent. Alexi first responds to Hege and Jurgen's relationship by saying that Jurgen "helps" them both and must be allowed to stay, which is both a pathetic failure to comprehend a world changed by sexual desire, and a confused assertion of a different kind of desire and attraction. Even later there is a remarkable scene where Alexi, Jurgen, Hege and Johannes all go chopping wood together, and they all seem to relate to each other as tender lovers, irrespective of age: a scene both moving, challenging and disturbing. 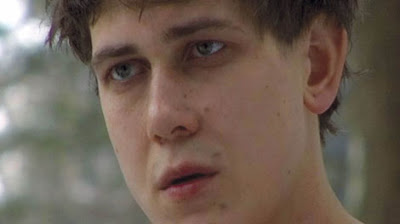 The same could also be said of the landscape which, although permanently snow covered, is never encountered as particularly harsh, even when Jurgen finds Alexi unconscious in the snow, strips off the later's shirt, and pummels his chest to get him breathing. Ultimately, however, as the film and its audience both know, family and landscape of this kind must be moved beyond. Perhaps such a shift is impossible without a touch of the preposterous: when Jurgen and Hege kiss, Grandrieux cuts to a waterfall. When they finally do make love the films colour scheme becomes warmer and, having hardly spoken for most of the film, Hege launches into a full rendition of a Schubert lieder.

There is a much else that could be said about this wonderful and absorbing film. Take, for example, Grandrieux's powerful use of the camera as a discerning, empathic instrument: not identifying with a particular point of eye-view - as Julian Schnabel explored recently in The Diving Bell and the Butterfly - but adopting its own distinctive range of perspectives, variously absorbed and distanced. When Hege and Jurgen leave the valley at the films conclusion, rowing out into lake, as Alexi and his mother stand on the shore, the camera doesn't adopt the viewpoint of the departing, but takes its own position on the edge of the lake, edging slowly backwards, in a movement both echoing that of Hege and Jurgen, and making exploration and commentary of its own.

What links such stylistic devices with the films content is the realization that extremes and excesses - of landscape, character, cinematic technique -  are needed to reveal the specific, yet overwhelming subtlety of the non-verbal and almost non-conscious emotions Grandrieux sets himself to depict. If Hege and Jurgen's departure fulfills the inevitable narrative arc set in motion by Jurgen's arrival, it also confirms a feeling that this isn't a story about another place and people at all, but a glimpse of a part of our own emotional lives that is forever similarly absorbed, yet to reach language or time, or what we might define as adulthood.